Myspace acquired by Specific Media for $35m – Justin Timberlake on board

As predicted, News Corporation managed to shift social network Myspace off its books before the end of its fiscal year. Digital media firm Specific Media has acquired Myspace for a reported $35 million, although the acquisition could see as many as half of Myspace’s staff being let go. One curveball aspect of the deal: artist Justin Timberlake is taking an ownership stake in Myspace, and will ‘play a major role in developing the creative direction and strategy’ for its future. “There’s a need for a place where fans can go to interact with their favorite entertainers, listen to music, watch videos, share and discover cool stuff and just connect. Myspace has the potential to be that place,” says Timberlake in a statement. Specific Media also says it plans to use Myspace for ‘socially-activated advertising campaigns, enabling brands to turn their campaigns viral by allowing users to share their favorite ads with friends’. News Corporation will take a minority stake in Specific Media as part of the deal, and Myspace CEO Mike Jones has already confirmed that he will leave in a few months’ time after the transition process. “We intend to make MySpace what it was supposed to be. We want to fulfill the original promise of MySpace – be a true home for content creators and artists,” Specific’s CEO Tim Vanderhook tells Advertising Age. Source: All Things Digital Source: Advertising Age

Some good news for fortysomethings: all those embarrassing (and in some cases recruitment-endangering) photos you uploaded to Myspace in your youth, and couldn’t remember your login to delete, are now scrubbed from the...
Read More 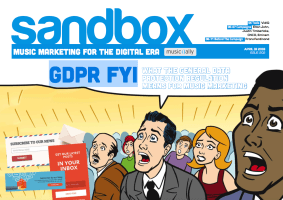 This week’s lead feature looks at how the GDPR (General Data Protection Regulation) comes into effect on 25th May in Europe but it has huge global implications for those holding and using consumer data. Against the backdrop...
Read More

“Did Daniel Ek just say that Spotify is buying SoundCloud?” No.

The dopamine hit from clickbait headlines will do for us all at some point. Nordic Business Insider has picked up on an interview with Spotify co-founder Daniel Ek on TV4 in his homeland of Sweden and suggested that, “reading...
© Copyright Music Ally All rights reserved 2022 - Website designed and maintained by