Innovative music-player startup Tomahawk unveiled its API during the Midem conference in late January, where it was pitching as part of the Midemlab startups contest.

“So, you want to build a cool music hack, site or app and the idea of having to interface with a bunch of different music sources keeps you awake at night?” asked its introductory blog post.

“Well, we now have you covered with a really simple multi-source music API that rids you of all the music fulfillment headaches and lets you focus on building your awesome app ‘that just plays’ for virtually all of your users regardless of who their preferred provider is.”

The API pulls music in from sources including Spotify, Rdio and Deezer, as well as YouTube, SoundCloud, Last.fm, Jamendo and Official.fm. The idea: it’ll play music from whatever service users are subscribed to (or the free ones if they’re not subscribed to any).

Music Ally sat down with one of Tomahawk’s core contributors, Syd Lawrence, at the show to find out more about the API, and what it means for developers making music hacks and services.

“More and more services are coming out each day it seems, and we need one player,” said Lawrence.

“As a developer making a music service of some description, I don’t want to embed all of them, but I probably don’t only want to make something for Spotify. But the API means you can make Tomahawk apps, and our app platform is the web, so your app can be anywhere.”

Lawrence also said that Tomahawk, with its API and also its Toma.hk website, is trying to help more than just developers.

“As a journalist, if you’re writing a review of an album, you just want to let readers listen to that album, without having to choose between, say, Spotify and Rdio to embed it,” he says, before moving on to artists.

“Artists are having to decide if they want more listens or to make more money,” said Lawrence.

“They’re all embedding SoundCloud players, which means people can definitely listen to the music, but that also means they don’t get paid. Whereas if people listen through Spotify, Rdio or Deezer, those services are paying the artists.”

Lawrence says the new API could work for a number of different websites and music services, picking out US-locked listening-room service Turntable.fm as one example: “They could quite easily integrate Toma.hk and not worry about licensing issues,” he said.

What about Tomahawk, though? Its desktop player, which bridges the gap between the various streaming music services, has been out for a while, but remains something people who’ve tried it rave about, but which most mainstream digital music consumers remain blissfully unaware of.

Part of the reason for that is Tomahawk’s bootstrapped nature: “In two years we’ve spent less than $5k on anything and everything,” said Lawrence.

“But we are looking for investment, not a huge amount, so we can invest in a decent design for the desktop app, and totally improve its user experience.”

Where Tomahawk can still come into its own, I suspect, is as a bridge between the various streaming music services, making it easier for people to switch between them without having to rebuild their entire (virtual) collections.

“People need one place to keep all this stuff so that switching is really easy – they can switch from Spotify to Deezer without having to worry about creating new playlists and new tracks,” said Lawrence.

It’s been a while since a music service used the .fm suffix (we’ve had Last.fm and Shuffler.fm), as most seem to favour a –ify ending or Grindr-style misspelling. But Kollekt.fm, a new service from the Netherlands,...
Read More 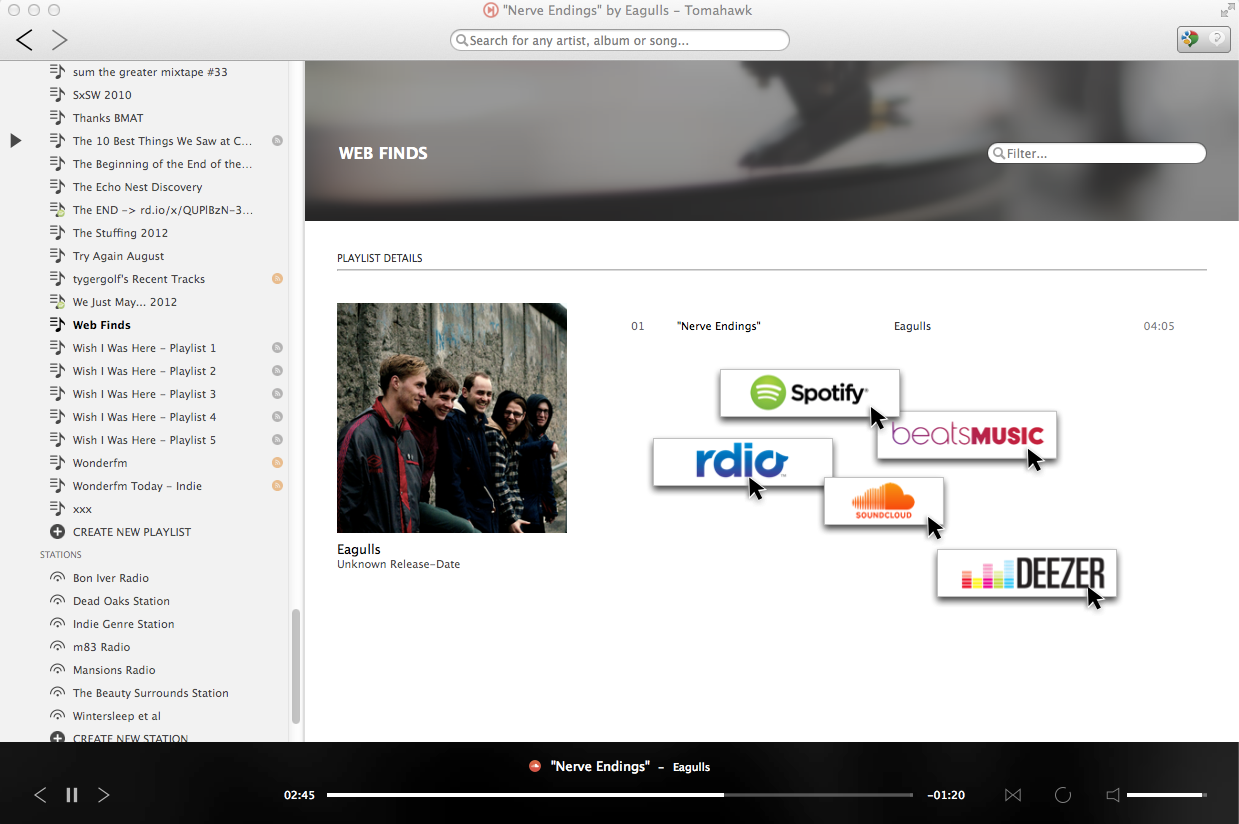 We’ve always liked Tomahawk as a concept: an app that sits in between the various digital music services, providing the connecting glue for sharing music and porting playlists, among other features. But it was always...
Read More

Songbird runs out of money, but its open-music tune plays on

In 2006, a desktop music-player application named Songbird was being hailed as an "open source iTunes killer" by tech blogs, fired up by its promise to breach Apple's walled garden and help people buy their digital music...
© Copyright Music Ally All rights reserved 2022 - Website designed and maintained by