It’s safe to say analyst firm ABI Research is feeling bullish about the growth of streaming music in the years ahead.

The company has published its latest predictions, claiming that 29m people will be paying for on-demand streaming services by the end of 2013, with Spotify accounting for 32% of them (9.3m-ish) with Deezer, Korean service MelOn, Rhapsody and Sony’s Music Unlimited its nearest competitors.

Just to reiterate, that’s $46bn of all-time on-demand streaming revenues, not $46bn in 2018 alone. “Some two-thirds of it will be going to the rightholders; although how they will split it is then a whole another matter,” says ABI’s Aapo Markkanen. Well, quite.

Market research firm Parks Associates is much more restrained in its predictions for streaming music’s growth in terms of people: it claims that the number of global streaming music subscribers will reach 15m by 2017 – that’s 14m less than ABI expects by the end of this year. And that includes non-on-demand streaming services like Pandora.

In this case, the forecast seems way too low: Spotify already has more than 6m subscribers, Deezer 4m, Pandora 2.5m, MelOn 2m, Muve Music 1.7m and Rhapsody 1m. That’s 17.2m people paying for streaming music already from those six services alone, with the IFPI having claimed earlier this year that there were 20m in total at the end of 2012.

The upshot of all this? Treat streaming music forecasts less with a pinch of salt, and more with a wheelbarrow full. We’re baffled as to how Parks Associates reached such a low figure for its 2017 streaming subscribers estimate.

And ABI? Its prediction that on-demand streaming services’ subscriptions alone will generate $41bn between 2014 and 2018 seems high given the fact that such services generated around $560m in 2012 by the IFPI’s reckoning. Even if this income doubles every year between now and 2018, it would still fall $5bn-ish short. 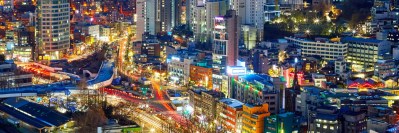 We already know that the superfandom around top K-Pop artists extends to buying albums rather than just streaming them.
Read More

This is part of some wider forecasts for the overall music streaming market, which J.P. Morgan expects to be worth $55bn by 2025.