British music startup Playlists.net has acquired a collection of Spotify playlists curated by Topsify, which has more than 607,000 followers on the streaming music service.

The acquisition includes the Topsify UK Top 40 playlist, which has more than 554,000 followers on Spotify, and was recently named by the company as its third most-streamed playlist in 2013, behind only Billboard’s Hot 100 and Spotify’s own Top 100 Tracks playlists, but ahead of Sean Parker’s Hipster International.

“Topsify have some of the most popular Spotify playlists out there, so it made sense for us to take ownership of them to bolster our own catalogue of playlists,” CEO Kieron Donoghue tells Music Ally, before outlining the current statistics showing the growth of his own company.

Playlists.net’s users have added around 31,000 playlists since the last time Music Ally interviewed Donoghue, in February 2013, then, with monthly page views having increased from 1.7m to 2.5m in that period.

The Playlists.net website still accounts for around 60% of traffic for the company, which rebranded from ShareMyPlaylists in June last year. However, mobile is becoming more of a focus, with a relaunched iOS app debuting in October with more ways for people to discover playlists and upload their own.

“It’s done really well: we’ve multiplied our downloads by a factor of 10. This year we’re working on the Android app: I have the first build on my phone right now, and it should be out in March-April time,” says Donoghue.

“We’re also going to do a brand new standalone app for iOS and Android, still related to playlists, but different and a bit quirky. We’ve been looking at models like Snapchat and Jelly, which are very minimal and fun, and little bit off-the-wall. This will still be music and tied in to what we do, but it’ll be a different spin on the genre.”

Playlists.net’s business model is still focused on advertising – it works with Vice’s Advice ad network – with a growing number of consumer brands appearing on the site. Donoghue says he’s thinking more about “native” advertising: how brands and labels can engage with Playlist.net users through playlists.

The label side is particularly interesting as more countries start to integrate streams into their music charts, with Germany the latest to adopt that model. Donoghue says that in countries where this has happened, it has spurred labels to do more marketing around playlists – both their own, and talking to the owners of other popular ones.

“If you have a big catalogue of playlists with 1.5m followers and you seed a song into a set of them all at one time, you can see a big jump – that song will spike massively in terms of streams – which in turn can give you a push up the charts. You can start to see this snowball effect, and we’re going to see more labels taking advantage of this as streams count towards the charts,” he says.

Think too about reports earlier this year about the prominent role played by Parker’s Hipster International playlist in the rise to fame of Lorde. But these trends also highlight some interesting ethical issues.

If you have curators running playlists with hundreds of thousands (and in time, millions) of followers on one side, and labels looking to market new acts and songs to that audience, is there a point at which this can become… problematic? Payola as a playlists phenomenon rather than a radio one?

“But if you have a playlist based on emerging acts for 2014, for example, and a label says ‘can you put this track in?’, if it’s a good track we’ll put it in and don’t charge for that. We do that all the time. There are only a handful of playlists and tracks where they would pay for it, so it’s more the exception.”

Other playlist trends? Donoghue says he’s noticed a few labels in Sweden, Spotify’s heartland, doing more “pre-release playlists” for specific albums. The idea being that fans sign up to follow the playlist, which may have 30-second preview clips in the run-up to an album’s release, which are then replaced by the full tracks as soon as it comes out. He mentions Avicii and Bruce Springsteen as two recent examples.

Donoghue also says that film and TV-themed playlists are increasingly popular on Playlists.net, and marvels at the way for some shows, people seem to be sitting in front of their TV, identifying tracks as they’re played on the soundtrack – even if it’s just for a few seconds – then updating playlists in real-time.

“That’s always been our strength: the man on the street, the bedroom crate-digger, who’s now got this platform to show off his curation skills,” he says. In one sense, this goes against one trend of 2014, which is for ‘professional’ curation of streaming playlists. Witness Beats Music’s editorial team recruited mainly from radio and journalism, or Spotify’s desire to get more tastemakers (including artists) creating playlists on its service.

“Yeah, Beats are going down that route, they have Pitchfork and brands creating playlists too. But we have those too, and on top of that we have the guy in his bedroom who’s an expert on, say, glitch-hop, and is the person you should be looking to for that. I’m really proud we have those people, alongside the artists and labels and radio stations who are using Playlists.net too,” says Donoghue.

For now, Playlists.net remains wedded to one specific streaming music service: Spotify. Back in February last year, Donoghue told Music Ally that the prospect of working with playlists for that company’s rivals didn’t appeal to him. “Right now if we did a deal with Deezer, Rdio or Rhapsody I don’t think we’d benefit much or grow our audience,” he said at the time. Have those views changed?

“I’m open to the idea,” he says. “Not so long ago I was Spotify-only, but now I’m open to the idea if it works from a technology point of view, and for our users. But what I haven’t yet seen from Rdio and Deezer is those guys having a bigger play on playlists. They’ve got to take that decision, that playlists are important, and that they might be missing out by not focusing enough on them.” 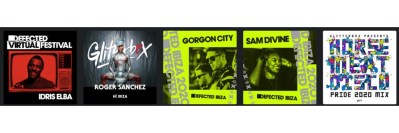 The latest external playlist curator getting some love from Apple Music is independent dance label Defected Records, including its Glitterbox brand. It's providing Apple Music with some exclusive DJ mixes and live sets,...
Read More