Streaming music service Deezer is searching for a new CEO, after announcing today that its current boss Axel Dauchez will leave the company in September.

According to Deezer’s announcement, Dauchez is leaving “in order to pursue a new professional opportunity” starting that month, although the company isn’t saying what for now.

The fact that Dauchez is remaining in the job until that date suggests he’s not leaving for a direct rival. The announcement notes that Deezer’s US CEO Tyler Goldman is joining the company’s management team of founder Daniel Marhely, COO Christopher Coonen and board chairman Didier Bench.

At this point, the departure appears amicable. “The entire Deezer team and I wish to whole-heartedly thank Axel for his hugely valuable contribution over the last four years,” said Marhely in a statement.

“We wish Axel all the best and continued success as he pursues his new career. Together, we have grown our brand in France and throughout the world and will continue to pursue this growth with the management team.”

The announcement set Dauchez’s departure in the context of “the internationalisation of the company” as it aims to launch in the US this year, after having expanded from its native France to more than 180 countries over the last couple of years.

“Deezer will continue to strengthen its position through negotiated manufacturer, musical and media deals around the world,” suggested the statement. Its recent European bundling deal with Samsung was the most high-profile of these partnerships yet.

Deezer currently has 5m paying subscribers and 16m monthly unique visitors, although the company’s strong point – its telco partnerships where people get the service as part of their monthly contract – has also sparked debate within the music industry about how to define an ‘active’ user.

Dauchez joined the company as CEO in 2010. Under his leadership, Deezer has been the most aggressive of the streaming services in terms of global expansion. In recent months, he spoke regularly about the company’s need to improve its discovery features, now that it had a global footprint secured.

“Discovery is a critical factor which makes the link between the music creation and the listeners, and more than that, discovery is critical for the people themselves,” he told journalists in November 2013, when announcing a new feature called Hear This that aimed to help Deezer users discover new music.

“If you always listen to the same tracks, it maybe gives you short-term satisfaction, but it does not build your musical identity more… Currently, the category is pretty poor about that. When you look at what is in the market today, of course there is recommendations and so on… Sometimes there is a reason to try, very rarely is there a reason to love… We need to build a step-change in our abilities to push the people to try and to discover new things.”

At that event, Dauchez predicted that streaming music services would continue to eat into the download businesses of companies like Apple.

“For me the download is a transition technology. The transition where for a while, you took the physical world and replicated it in a digital product. But nobody feels that the ownership of a file means something,” he said. “For me, the download will decrease. It will remain important because of the ecosystem… but we are moving towards a streaming world.”

For the most part, Deezer has managed to avoid the fierce criticism from artists about payouts that rival Spotify has attracted, although Dauchez did speak publicly about the issues, suggesting in November that “discovery is a key asset to convince the artists to move to streaming”.

He returned to the theme in a panel session this February at the Midem conference in Cannes. “If the platform is just a jukebox, people will only listen to the tracks they already know. If we do that, no money will finance the creation of new music,” said Dauchez.

“We have a common responsibility to generate discovery: to force people to try new artists, new songs… Investing in new artists is not a marketing tool: it’s an industry need… if 70% of the streams are done in the back catalogue, there will be no new creation.”

This responsibility will, from September, be somebody else’s job to lead at Deezer. It remains to be seen whether the company will replace Dauchez from within, or turn to external candidates.

What next for Dauchez? French journalist Emmanuel Legrand tweeted this afternoon: “Sources tell me that @Deezer outgoing CEO Axel Dauchez is working on a new project to be unveiled ‘in a few weeks’.” Watch this space.

Nostalgia is all the rage, from 80s-infused TV dramas to piano-house bangers back in the British pop charts.
Read More

Deezer famously abandoned its plans for an IPO in 2015, but seven years on it has finally gone public – through that most 2022 of mechanisms, a 'SPAC' merger.
Read More 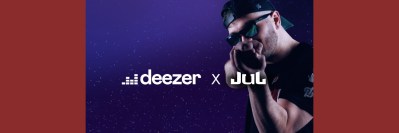 Deezer took its latest step into concert livestreams this weekend, bagging exclusive rights to stream the homecoming gig by Jul.