A recruitment ad for an ‘Editorial Producer’ within Apple’s iTunes team in London hints at plans to beef up the editorial content in the company’s music service, ahead of its anticipated relaunch later this year.

“iTunes is looking for an editorial producer with experience across pop culture and a specific expertise in music journalism,” explains the job ad.

“This full-time position is split between editorial and producing duties. The editorial duties focus on writing, editing, managing a sea of freelancers, and working collaboratively with business and content heads to shape and define editorially driven merchandising promotions.”

The ad (click on the image below to see a larger version) calls for a “seasoned writer with broad pop culture background” and “deep contacts in the freelance world with writers who can cover the spectrum of pop culture (music, movies, books, etc”. Their job will involve “managing and motivating a stable of freelance writers”.

Why is this interesting? As things stand, iTunes isn’t really a place for music journalism: the store’s editorial focus is more on choosing the songs and albums that are featured on the store’s homepage, as well as drawing together individual promotions within it. It’s about curation rather than writing. The job ad suggests that this will soon be expanding.

That in itself isn’t a surprise, as Apple prepares to relaunch iTunes with streaming service Beats Music as a core part. Rival Spotify has an editorial team, for example, producing interviews and content for its Spotify Landmark series, which has covered classic albums by Nirvana, Nas, Led Zeppelin and Tears for Fears.

In Scandinavia, meanwhile, streaming service WiMP (which now has a separate version called Tidal launched internationally) has always made editorial a key part of its offering: features, reviews and interviews as well as curated playlists.

Are digital music services the new music journalism? It sounds like a silly soundbite, but with many traditional print magazines in the music sector struggling, and internet outlets still trying to figure out the economics of online publishing, a company like Apple might just be one of the most stable employers for an experienced music writer in the future.

Of course, Apple isn’t just hiring in journalists to improve iTunes’ music offering: DJ Zane Lowe recently announced that he was leaving Radio 1 in the UK for an unspecified role within Apple’s iTunes team in the US.

“It’s about being able to get great music to an audience on a global level. I know that there is an opportunity to come out here and to build something that will reach parts of the world that I’ve never reached before,” said Lowe, after announcing the move.

No surprise that Apple continues to be in rude health as a business, posting revenues of $92.28bn in the first quarter of 2022.
Read More 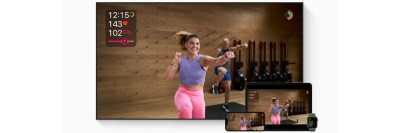 Each artist gets weekly workouts accompanied by playlists of their music across the various categories on Apple Fitness+.
Read More

Apple takes aim at Meta for ‘hypocrisy’ over creator cuts

Meta recently announced the business model for virtual item sales in its Horizon Worlds virtual world: it will take up to 47.5% of the transaction fees.