Telcos bundling streaming music with smartphone contracts is a familiar distribution strategy, but one that’s being talked about a lot in 2015.

Why? Partly because companies like Spotify, Deezer and Rhapsody/Napster continue to see it as a key route to the mainstream music fans that they need to fuel their future growth, but also for another reason: a potential competitive advantage over Apple Music. The theory? Apple being Apple, it’s less likely to have the flexibility required to strike some of these telco deals.

Which is why yesterday’s news that Australian telco Telstra is bundling a 12-month subscription to Apple Music with its Go Mobile Plan contract for iPhones is so interesting. Customers adding the bundle to their account will be texted three days before the year is up notifying them that they’ll be about to “roll on to a paying subscription”.

Tech blogs are already taking this as proof that Telstra will use carrier billing – charging people through their mobile bills – for an Apple Music subscription.

We’ll await an official announcement on that score, but the sight of Apple sanctioning a year-long bundle with a prominent operator certainly makes waves in a market that hadn’t (publicly, at least) expected it to make such deals a priority. Note, though, this particular bundle doesn’t ‘zero-rate’ the data for streaming over 3G or 4G: it’ll still count against people’s allowances.

This is where another breaking news story provides some fun context. Business Insider reported yesterday that Apple is in talks to launch its own mobile virtual network operator (MVNO) in the US and Europe – albeit with a launch potentially as far as five years away.

That would see customers paying Apple directly for their monthly mobile package, with the company able to bundle its own services in, and soak up the data costs for off-Wi-Fi streams and downloads.

The threat to Spotify and co, then, isn’t just about Apple striking telco deals, but about Apple becoming a global telco with (potentially) a decent share of iPhone owners.

If the company’s App Store and its 30% cut of app subscriptions is making Spotify and co complain to competition authorities now, how will they respond to a full-on Apple MVNO? IF – and it remains an if – the company goes down that route. 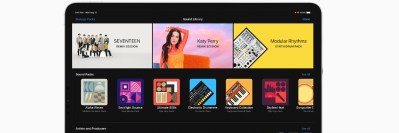 Apple is adding more remix sessions to GarageBand, working with artists to provide lessons on how to play with their popular tracks.
Read More

Apple has been growing its music business in Africa for some time now, from Apple Music and Shazam to its Platoon artist-development team.
Read More