What would user-centric streaming payouts really mean for artists?

Could Spotify and other music streaming services answer their musician critics by changing the way they calculate their payouts? The debate about whether these companies should switch to a “user-centric” model is growing in volume in 2015.

What does it mean? Currently, streaming services gather their subscription (and where applicable, advertising) revenues, count up the total number of streams each month, and divide the money up on a pro-rata basis. The more streams your music gets, the bigger share you get – well, the rightsholders representing you get – of the payouts pot.

The brewing argument is that this system favours the biggest artists with the most streams, and penalises emerging or niche artists. The reasoning goes like this: even if you pay £9.99 to Spotify and only stream Iron Maiden for the entire month, the £7 of your subscription that gets paid out to rightsholders won’t all be heading their way – it’ll be going to One Direction and Calvin Harris and Hozier and… you get the idea.

An alternative “user-centric” model would split each user’s subscription (or associated ad revenues) only between the rightsholders for the songs that they actually listen to. The argument has been made persuasively in a blog post by musician and startup founder Sharky Laguana, which is doing the rounds of the industry today:

“It’s like you bought a CD and the store told you that you had to listen to it 1,000 times, or they will give your money to Nickelback. That’s fucked up.”

Laguana wants a shift to a user-centric model – he calls it Subscriber Share – and is calling for a ‘silent protest’ by music fans in September, where they would turn their volume down and stream bands they like round the clock, to make a point. His full post is well worth reading.

The blog post follows a similar call from industry consultant Mark Mulligan earlier in the month:

“Make no mistake, this model will be very difficult to license and the vested interests would likely resist it. But until we get to scale with subscriptions, we need to explore all ways of ensuring revenues are distributed on as equitable a basis as possible. This approach won’t fix all the artist-income ills of streaming but it will help smooth the transition.”

The logic is persuasive, because it’s emerging and niche artists who are the most worried about how they survive the transition from a sales to a streaming world. If bands with thousands rather than tens of millions of fans got a bigger share of their listeners’ subscriptions, it might provide a more sustainable income for them.

Is the faith in this model misplaced, though? The current debate and Laguana’s post stirred memories of a couple of research studies conducted in Scandinavia in 2014 using data from WiMP, the streaming service that has since been acquired by Jay-Z and rebranded as Tidal.

WiMP provided two researchers in Norway and Denmark with anonymous usage data, so they could explore whether switching to user-centric payouts would make a big difference to the way streaming payouts were split.

Maasø used data of streams by all WiMP users in August 2012 and August 2013, concluding that while some genres like jazz and classical would benefit under a user-centric model, the bigger picture wasn’t so different from the status quo – although there were benefits for local artists in a country like Norway:

“The results of the comparison between the two models shows that they do not differ much viewed from a bird’s eye perspective. Both models give the same share of revenue to the same top 5000 artists collectively, and the top four labels would receive almost the same revenue with a user-centric model, as in the current pro rata model (75% compared to 76%).

WiMP provided data to the second study in Denmark, working with Rasmus Rex Pederson at Roskilde University for research based on streams from all WiMP’s Danish users in August 2013: Music Streaming in Denmark (PDF).

His findings noted that the most popular artists have the least intensive listeners – people who listen to fewer total tracks in any given month. Running the calculations, he found that the top 5,000 artists, who account for more than 91% of total streams, would get around the same amount under a per-use model as under the existing way. Those further down the tail would only get a 0.1% increase in their revenues.

However, Pederson’s research backed up the Norwegian study when it came to local artists, up to a point. Danish artists among the top 5,000 artists would see a relative increase in their payments of 9.8% under a user-centric system, but most of that would go to the most popular of them.

As two studies conducted in advanced streaming markets, this research is of intense interest to artists and labels in larger music markets, although it’s fair to say more research is needed to get a conclusive picture of what a user-centric model would mean for musicians of all levels and genres. Based on those two studies, though, it seems such a switch might not be the paradigm-shift in streaming royalties that some are hoping for.

That said, both Maasø and Pederson came to the conclusion that the switch might be worthwhile for other reasons. Here’s Maasø:

“A new user-centric model is likely to be perceived as a more fair model by fans, as they are treated equally according to what they pay for music, and the money they contribute is distributed directly to the labels and rights-holders behind the music, thus connecting it to each listener’s streams.”

“There are two primary benefits of shifting to a per user distribution model. First, it re-establishes the economic connection between the consumer and the artist, where the fees paid by the subscriber is distributed among the artists she actually listens to. Secondly, it benefits local artists, which could be interesting from a cultural policy perspective.”

WiMP was bold in providing the necessary data for these studies, but perhaps now in 2015 it’s time for a bigger player – Spotify would be the obvious candidate – to step up and partner with independent researchers to dig into this topic again. 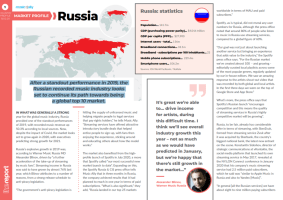 After a standout performance in 2019, the Russian recorded music industry looks set to continue its path towards being a global top 10 market.
Read More 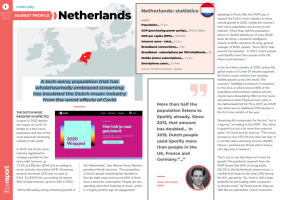 Rumours of an imminent Tidal acquisition have come and gone before, but the latest seems like the most serious yet. Bloomberg reported that the streaming service has actually held talks with Square, the payments technology...
© Copyright Music Ally All rights reserved 2021 - Website designed and maintained by