Spotify is launching a new “Fan Insights” dashboard that will provide musicians and managers with analytics on how they’re being listened to on the music-streaming service.

The dashboard is currently in “limited beta” on desktop computers, with a basic mobile version available too. Artists and managers can request access now, although the proper rollout will take place in the coming months.

The new dashboard solves one of Spotify’s headaches this year: the fact that its previous partner for providing analytics to artists – Next Big Sound – was bought by another streaming service, Pandora, earlier in 2015. Fan Insights has been developed in-house as a replacement.

Ahead of the launch, Music Ally got a demo of the new dashboard from Spotify’s head of artist services Mark Williamson and VP of product Charlie Hellman, who said that its emphasis is on “actionable” information rather than a deluge of data.

“In our early days of going out and speaking with artists and managers, we went out with reams of data: ‘here you go, let’s see what sticks’,” said Williamson. “But this is not about how we can throw as much data at you as possible and get you guys to process it. We’ve listened to the whole ‘too much data’ theme you’ve been hearing about on panels, and tried to focus on stuff that’s useful.”

Williamson and Hellman walked us through the dashboard with (real) data from three artists: a stadium rock band, an emerging pop artist, and a buzzed-about band who recently released their second album.

It starts with a overview of the artist’s (or artists’ in the case of management companies tracking several) topline stats: how many monthly listeners they have on Spotify. It’s the same figure that’s publicly viewable on every artist’s Spotify profile.

Artists and managers can break down their fan demographics by gender, age and location, with a long, ranked list of the cities they have most fans in on the latter front.

But that monthly listeners total isn’t that useful in the scheme of things: it includes anyone who’s listened to an artist in the last month, even if it was a single track on a playlist. Fan Insights thus breaks it down into more subcategories:

The first is “fans” – a figure for the number of people who’ve pro-actively listened to an artist several times in recent months, and have saved their music to their collections.

As an example of how this can break down for an artist with 1.45m monthly Spotify listeners: 454k of those people might be fans, 10.3k loyalists, 8.9k regulars and 1.1k streakers.

“In our interactions with artists and managers, getting a handle on fans and superfans in particular was a really high priority for them,” said Hellman. “Those fans and superfans have a disproportionate impact on revenue: they’re the people who’ll buy tickets, VIP packages, merchandise and will be the social evangelists for the band.”

The obvious follow-on question: how can artists and managers use this data? Knowing you have 10k “loyalists” on Spotify is one thing, but being able to contact them another – something with immense appeal for anyone trying to market music, but fraught with risks of spammery if it’s mishandled.

Spotify has quietly been working on this in recent months, running targeted mailouts for selected artists to their keenest fans on its service. The Foo Fighters, Disclosure, Ed Sheeran and Guy Garvey are the examples that we’ve spotted, but according to Spotify it has also run “Fans First” campaigns for Vance Joy, Jason Isbell, Chvrches, Kaskade, Father John Misty, The Cribs, Joywave and Shawn Mendes.

“The approach so far has been relatively bespoke: we’ve worked with artists to do one-off messages, and we’ve gotten better and better at doing those things efficiently,” said Hellman.

“So far, the engagement has been insane: five times the level of engagement that a normal email from Spotify would get.” Spotify also says that this has seen click-through rates as high as 40%-50% from those emails.

With Spotify’s new dashboard quantifying artists’ superfans, will the next logical step be to expand the Fans First initiative so more managers (and labels) can use it?

“We are looking at ways we could streamline and even open up that capability for artists, but there’s no announcement on that yet,” said Hellman.

Other points of note about Fan Insights: artists and managers will be able to get a page of analytics for individual songs, and they’ll be able to drill down to see how artists’ music is being discovered and listened to.

For example, comparing listens (from all monthly listeners or just from fans) across Spotify’s own playlists, others’ playlists, listeners’ saved music, artist profile pages and other sources:

Each artist will also be able to see how many playlists their music is on, and a breakdown of the top 100 showing how many listeners they had; how many of those were new listeners for the artist; and how many streams that generated in the last month.

“It answers one of the biggest questions: where is my music being discovered?” said Hellman. “What are the big playlists that are working for me?” He added that Spotify is exploring ways it might open up some of this data from playlist owners in the future, although again, there is nothing to announce just yet.

It’s no surprise to see Spotify announcing and showing off its Fan Insights dashboard: it’s part of the company’s wider efforts to pitch itself as a force for good in artists’ careers, in the face of ongoing criticism over the size of streaming payouts.

Planning tours is a common theme around this area – both SoundCloud and YouTube tout it as one of the ways their analytics can fuel artists’ businesses – but for Spotify, the key may be in those moves to not just show artists how many superfans they have, but give them tools to (un-spammily) reach out to them.

“Ultimately, if we can make it easier and more effective for artists to market to those fans who are really going to give a shit about them, it’s going to be better for the users and the artists alike,” said Williamson.

Fan Insights isn’t a silver bullet to kill off criticism of Spotify specifically and streaming in general, but it does represent a step up in terms of how data is being shared with artists – rivals can expect questions from managers about how their own analytics compare.

Williamson hoped that the new dashboard will further fuel a wider trend: that of managers being much more hands-on when it comes to artist data, and their wider digital businesses.

“Without fail, every management company knows they want to be doing this stuff in-house: they want the capabilities to understand the data, and to have the smarts internally to action it,” said Williamson.

It’s also part of Spotify trying to nudge the music industry away from thinking about “streams” as the important metric, and towards a focus on “listeners” and fans.

“The problem with ‘streams’ is that they go up almost no matter what happens: as Spotify adds millions more users, streams go up. What’s useful with ‘listeners’ is that they are the context of real people – real sets of ears – as opposed to what can be an abstract context of millions of streams,” said Williamson. “Listeners gives you a sense of your actual fans out there.”

“The rest of the internet has already benefitted from this audience thinking. Internet sites used to talk about page views, but most businesses have moved on to monthly active users – how many people care about a brand, how many would be willing to pay for it – but in music we’re still in a units type of mentality,” added Hellman. 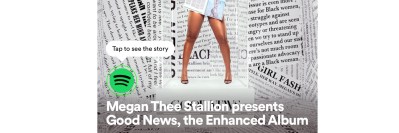 Snapchat and Instagram have stories, Twitter now has fleets, but it's easy to forget that Spotify, too, has been exploring the 'stories' format. For a reminder, take a look at 'Megan Thee Stallion presents Good News, the...
Read More 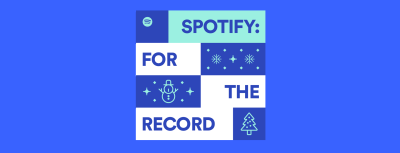 It’s Christmas season, and heaven knows we all need it after the year that 2020 has been. It’s no surprise to see Mariah Carey’s annual climb up various charts starting early: ‘All I Want For Christmas...
© Copyright Music Ally All rights reserved 2020 - Website designed and maintained by