B2B digital-music firm Omnifone has been placed into administration, resulting in the layoff of up to 70 staff as it seeks a buyer for the company’s technology assets.

The UK-based company’s clients include Samsung, SiriusXM, Guvera and Neil Young’s PonoMusic. It is unclear at the present time what the administration means for their services.

“On 4 May 2016, Omnifone Limited and Omnifone Group Limited were placed into Administration in the High Court of Justice, with Andrew Duncan and Neil Bennett, of Leonard Curtis Business Solutions Group, appointed as Joint Administrators,” explains a note on Omnifone’s website.

“The affairs, business and property of the Companies are being managed by the Joint Administrators, who act as agents for the Company and without personal liability.”

The news comes less than two months after Omnifone appointed a new CEO, Doug Imrie, who was promoted from a role as MD and COO to replace previous chief Jeff Hughes.

When Imrie stepped up, there were no outward signs in the company’s announcement that it was in trouble. He announced two new products – a Global Metering Hub and an Acoustic Lab – and expressed confidence about the company’s future.

“We have identified several exciting opportunities to enable digital service providers, rightsholders and other industry stakeholders to select the key components of our music cloud that they need, to build products that enhance their services and operations,” said Imrie at the time.

However, Omnifone has faced a number of business challenges in recent years. The company’s spin-off streaming service Rara was a flop; and client services Music Unlimited (for Sony) and BBM Music (for BlackBerry) both shut down.

Omnifone’s financials also revealed that the company had been facing considerable challenges. Its revenues for the financial year ending 30 April 2014 were £38.5m, down from £46.8m the previous year. Meanwhile, its net loss grew from £10.3m to £15.9m in the same period.

Omnifone had been due to file its accounts for the year ending 30 April 2015 by the end of January this year, but missed the deadline.

In February 2015, Hughes told Music Ally that Omnifone was well-placed to return to growth.

“We have signed six new clients in the last six months, and two are companies larger than Sony in their size and ambition in the music space: massive global companies that fit the type that Omnifone is known for serving,” he said.

“Those revenues will come online as we launch, and will more than replace what we need to replace from the losses of Sony and BlackBerry… I’ve always feared the concentration of our revenues in a few big customers, and there was a realisation that we needed to fix that a couple of years ago.”

Omnifone was founded in 2003 by Rob Lewis, Phil Sant and Mark Knight, who had previously launched (and sold) technology news site Silicon.com. Their first music product was cloud service MusicStation, which made its name striking global deals with major labels – a rarity at the time – and powering Vodafone’s digital music service.

Since then, Lewis ran Omnifone spin-off Rara and has since launched a new music-streaming company, Electric Jukebox. Sant had stayed with the company as chief engineer, while Knight was its chief architect.

Omnifone’s most recent announced deal was with Japanese social network Line in October 2015, for its Line Music streaming service. Omnifone was helping Line grow its catalogue of western artists.

The company was facing strong competition, not least from fellow British firm 7digital, which has been picking up a succession of B2B contracts in recent years.

“Of all the people in the B2B space, they’re the only ones that haven’t pretty-much petered out yet, so they must have some idea of what they’re doing, and some sharp people,” said former Omnifone CEO Hughes in February 2015.

“I wouldn’t mind them not being there, but they are, so… Our revenue base isn’t threatened by them.”

Whether through competition or not, Omnifone’s revenue base appears to have deteriorated over the last year to the point where administration was the only viable option for the company.

We’ll update this story as more details come to light about what happened, and what it means for Omnifone’s clients now.

The music industry is already reacting to the news:

Sorry for some of the no doubt good people at Omnifone that lost their jobs.

The middle is getting squeezed. https://t.co/U1tGS06Wu3

BPI CEO Geoff Taylor believes that the UK can reach 30m music subscribers over the next five years, as technological advances fuel the demand for digital music. Speaking to Music Ally for our latest country profile, Taylor...
Read More 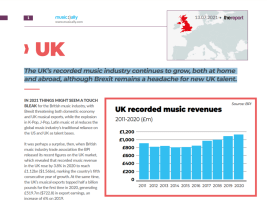 The UK’s recorded music industry continues to grow, both at home and abroad, although Brexit remains a headache for new UK talent.
© Copyright Music Ally All rights reserved 2021 - Website designed and maintained by