“Being an artist today, it’s not only about being the best at playing guitar. You have to perform in so many other ways.”

As the creative director at Stockholm-based multi-platform network United Screens, Georg Herlitz is working with a number of such performers: clients include Zara Larsson, Alesso and Julia Westlin.

The company works with more than 500 Nordic creators in sectors including vlogging, beauty, gaming and music, with the latter category accounting for around half of its 240m monthly video views on YouTube.

While the debate continues to rage about YouTube’s music royalties and the ‘safe harbour’ protection for its business, Herlitz thinks the younger musicians who’ve grown up with YouTube see it just as much as a platform for self-expression and promotion.

“You have to think of YouTube and all your social media platforms as the place where you build up a relationship with your fans,” says Herlitz.

“These social media platforms are great ways to get your character across: your political thoughts, all the other things that matter in an artist’s life besides the music. The music industry has so much to learn from classic YouTubers.”

He cites the example of Felix “PewDiePie” Kjellberg and his army of 44 million “bros” on YouTube: a community that is as much about his personality as his gaming skills.

“But it is not enough to only do good songs any more. You have to have a broader spectrum.”

For that reason, Herlitz isn’t a big fan of Vevo, which you could argue is the biggest pure-music multi-channel network (MCN) in the world, albeit one that until now has been focused almost exclusively on music videos.

“There are so many more moments to be recorded and shared with your fans than just the actual music videos,” says Herlitz, who says young musicians across the Nordics are exploring vlogs and behind-the-scenes footage whether they’re on tour or in the studio.

Some artists maintain their own YouTube channel separately from their Vevo-branded channel: Zara Larsson is one example, but Taylor Swift and Beyoncé are others, even if their personal channels are more likely to house tour announcements and preview clips rather than raw vlogs.

Herlitz is also unimpressed with the way Vevo works for an artist. “You give away your connection with your audience to a third-party company,” he says.

“If you change label, you cannot take that channel with you: all the subscriptions belong to this other company, not to you. That’s worthless from a YouTuber’s perspective. When I explain Vevo to some of our gaming channel owners, they say ‘why would you even agree to such a deal?’”

While United Screens does work with music labels to boost their YouTube revenues, a growing part of its job – like any MCN – is pairing channels with brands for sponsorship and branded content.

Sometimes a brand will approach the company with an idea of the demographic it wants to reach, with United Screens then suggesting some suitable channels to work with. Other times, the channel-owner will start with a creative idea that they need funding to see through, in which case United Screens will take it to brands on their behalf.

“We have a history in the broadcasting environment where, when you make a commercial, you have to talk to everybody and really fit your message in the middle. But by doing so, you become boring and uninteresting for a lot of that audience,” says Herlitz.

Instead, he thinks branded content on YouTube can be much better targeted – a campaign with a heavy-metal channel can be very different to one with a reggae channel – giving brands “a lot more faces than you have in the broadcast media”.

Herlitz says this still requires brands to accept that they won’t be in the driving seat creatively on such projects.

“The channel owner is the only one who truly understands their audience. More and more companies are understanding that, and the benefits of standing behind influencers and letting them do it their own way.”

Some of those companies are music labels. United Screens is seeing more opportunities to pair labels with non-music creators in its network.

For example, last week, Sthlm Panda – one of the most popular prankster YouTube channels in Sweden with 180k subscribers – worked with Sweden’s Eurovision artist Frans, getting fans to sing his song ‘If I Were Sorry’ karaoke-style in the street, before the star turned up to surprise them.

The project was a collaboration between United Screens and Frans’ label Sony, with Herlitz saying his company has fielded enquiries from all the big labels in Sweden about such collabs in recent months.

“All labels have the same challenge: how do they present a new artist to a new group of people? A lot of young people don’t listen to the radio any more, they don’t watch MTV,” he says.

“But if you have an artist who you think appeals to, for example, girls between 13 and 17? We can present you with a number of channels which have exactly that kind of audience, and get an audience of 100,000 girls in that target group to watch your artist.”

What about the current industry rows about YouTube’s value for music, then? As an executive at an MCN, Herlitz unsurprisingly has a more positive view of the service’s role in this world.

“We would like to earn more money from YouTube, although in some cases it makes a big difference when we sell ads on a channel rather than rely on Google’s ads,” says Herlitz.

“But I think you should see all of your social media as potentially platforms that will share revenue with you. We can see that Facebook is about to do that, and I think a lot of other platforms will follow eventually.”

Herlitz points to YouTube Red as potentially a “big game-shifter” for musicians, and reminds labels of the potential in securing sponsorship from brands at a point when “TV broadcasting is falling apart” in terms of ad budgets.

“Yes, I would like to have more money coming from YouTube revenue, but it’s still the only social media platform that gives you anything for doing content,” he says.

United Screens is eyeing those other online-video platforms beyond YouTube for its creators. In Herlitz’s case, it’s not Facebook, Snapchat or Instagram that is currently intriguing him most, though.

“I’m really interested in Twitch. We have Swebliss working at the office here in Stockholm, and she’s the Nordics’ biggest female gaming Twitcher. She’s doing it all day, and it’s really interesting to see how it works, and how you interact in the audience in such a live and direct way,” he says.

“I’m really impressed with that platform, and have been thinking about why wouldn’t you do a platform like this just towards music?”

United Screens is getting to grips with Snapchat too, while Herlitz is keen to see how Facebook takes its native-video strategy forward – particularly when it comes to its plans to aid copyright-holders in taking down unlicensed uploads of their videos.

“Facebook has tremendous work ahead cleaning up the mess of all the videos being uploaded by whoever wants to upload them,” he says. “They have to take care of that first before they start sharing revenue with most people.” 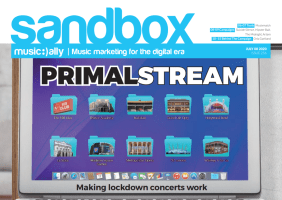 Lead: Livestreams have moved to try and fill the massive hole left by the total cancellation of tours and festivals around the world. As more acts do them, however, it becomes incrementally harder to stand out and draw...
Read More

YouTube had analytics that musicians were using long before Spotify for Artists, Apple Music for Artists, Amazon Music for Artists and the rest. Along with SoundCloud, it was an early tool for artists to see (for example)...
© Copyright Music Ally All rights reserved 2020 - Website designed and maintained by