Hundreds of thousands of music fans are already interacting with their favourite artists through bots on messaging apps like Facebook Messenger. So how might this trend develop in 2017 and beyond?

The panel began with a debate over semantics and how the use of the word “bot” is actually a barrier to the technology’s wider adoption.

“I think the word ‘bot’ sounds like it’s some crazy AI supreme being,” joked Ferrar. “It feels a bit off-putting and it sounds complicated when actually I think ‘messaging’ is a better phrase to describe the interaction with the bot. I think we need to move away from the word ‘bot’ and more towards ‘messages’ so that people will understand this world of communication more.”

He added that even selling the idea to people in the industry was proving difficult because of the terminology used – so that should be an early-warning sign ahead of the issues it could potentially face entering in the mainstream.

“Trying to explain it to artist and management communities, the word ‘bot’ immediately conjures up all sorts of things,” he said. “If we start to use ‘messaging’ then people will understand it.”

The issue of how “human” they should be was also discussed, and this was seen as a tricky – but critical – balancing act.

“It totally should have a personality but should totally not pretend to be a human,” proposed Lawrence. “It should not pretend to be the artist. If people think it’s a human and it’s not, then it sounds really shitty to them. Adding a personality with the way you word things is super-important. At the same time, be really careful with overuse of jokes. Some people think they need to add jokes to these statements but the same joke, after you have seen it 10 times, is not really that exciting. Personality is key.”

Lawrence was also keen to point out this was not a novelty technology, but rather it is one that is having immediate and measurable commercial impact. He claimed that 99% of messages on some of their bots are being read within a minute and the calls to action are strong.

“The numbers are vast,” he said. “We have found something that drives significant revenues […] With Hardwell, we launched a picture book and it drove more sales that Google, Facebook and Twitter combined. It’s ridiculous!”

Sadr did, however, suggest that the costs of doing a bot well mean that smaller acts and labels are currently being priced out of the opportunities here.

“It is not difficult to set up a basic chatbot as there are platforms out there that can do it for free,” she said. “I have been playing around with Chatfuel to test it out for artists because smaller labels don’t have those budgets. It’s when it comes to maintaining the actual chatbot and making sure it doesn’t crash, there is where it gets really difficult. That’s the challenge for smaller labels as that’s where you need the budget.”

Ferrar has early experience with bots, using them as key parts of the Bastille marketing campaign last year and claimed there is now a basic typology of bots emerging as they get used more and refined more.

“There are two types of messaging bots,” he suggested. “There are the very functional ones that can act almost like an email database if you want – where you sign up and receive communications based on your preferences […] Or you can really develop it and build out the level of conversation that you can have with it and get it doing really interesting and creative things.”

He added that they can be powered by existing content from other artist channels but, as they become established, they will need bespoke content.

“If you have your social media content plan, you can start to borrow content from there and use them in the bot,” he suggested. “What will ultimately make these things good is if they have a point of difference and they aren’t the same as the artist’s social media and they aren’t the same as your newsletter – so you can get something from them that you are not getting elsewhere.”

He also shared some stats from his own use, saying that they have a near-100% delivery rate and a 70% click-through rate.

Lawrence suggested that, as they are part of the dark web, usage will be very different and could unlock access to a large ‘silent’ fanbase for certain acts because they are private.

“My example for that is Katy Perry,” he said. “I am not going to like Katy Perry on Facebook as my friends will know I have. But if I can send her a heart emoji in Messenger and she replies with a heart emoji, I will be like a 13-year-old boy again!”

As for added monetisation (beyond sending users to external sites), Lawrence said Facebook is making slow by steady moves to make monetisation happen within Messenger.

“You can do payments in the US but globally they haven’t released that,” he said. “The company policy is that you can’t link off to payment sites. They are working on it and until they have their payment system in place, then you can’t use another payment system. They are a business and they are trying to figure out how to make money out of this. They will be trying to figure that out and that will involve taking a cut of any payments through it.”

He went on to give an example of what is happening in China with WeChat and scan codes (and why they are making up for the failure of QR codes that required users to download a dedicated app to use them). He suggested that the West is years behind what is happening there but should prepare for how bots are changing social and commercial activities. Everything happens within the app and that means mass adoption is more possible than QR codes ever were.

“Look at China with WeChat – it’s fucking wicked!” he said. “You can walk into a restaurant and scan the code on the table, it brings up the menu, they know where you are sitting and bring your food, you finish eating and you pay. Done. It is a very different situation. This is all brand new for us in the West and we haven’t had a platform that we can do that on. A gig poster that has a scan code for the town where the gig is and you can buy the tickets. You can have a different code for each location and it knows that you want to buy a ticket for that city. Done. That is going to be pretty cool.”

Talking about Latin America, Chamberlain explained how bots there have gone through three phases as a means to perfect the offering.

“The first phase was understanding who we were talking to and who was talking to us – in terms of what they wanted to hear,” he explained. “It is a very manual and labour-intensive process, but that is the only way to do it. Once we have a clear understanding of who our audience then we could launch phase two [which uses location]. Phase three is then launching it for artists. For some that might seem the other way round as a lot of artists launched the artist bot first. We were about understanding the audience first before moving forward.”

While this was all generally positive about the changes bots could bring, there was also an outlining of where and how they could be used incorrectly or in a damaging way.

“The one thing I am slightly worried about is that it has the potential – for those who don’t understand their audience – is that it gets really spammy,” cautioned Sadr. “It just puts people off.”

Lawrence said the platform can actually be self-policing and help mitigate against this. “There will be bad actors who will spam people,” he accepted. “But there is a report button. Call them out on it and report them We don’t want that happening.”

Ferrar ended by calling for a reality check at the moment as the leap into the mainstream for bots is still some time off.

“We were thinking about launching one for Take That but we were not sure how au fait the fanbase would be with messaging as a construct,” he revealed. “We are looking at them now for The 1975 and Years & Years where we know there is a younger fanbase who are more used to this technology […] They are not for everyone just yet.”

The future of streaming and music marketing post Covid-19

After an introductory session offering views on Covid-19's music impact around the world, Music Ally's Sandbox Summit Global conference turned its attention to what happens next. The online event's 'Future of Streaming...
Read More

Sony Music steps up its podcasting with nearly 40 new shows

Sony Music has been signalling its podcasting ambitions with a series of partnerships over the past year. Now it has revealed nearly 40 new shows resulting from those deals – and they’re all launching this year....
Read More 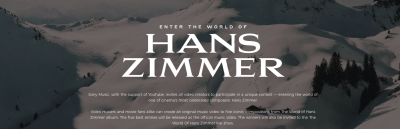 For any aspiring filmmaker, the chance to have their work soundtracked by composer Hans Zimmer would be a dream come true. Now it will come true for five people. Zimmer has teamed up with Sony Music and YouTube for a...
© Copyright Music Ally All rights reserved 2020 - Website designed and maintained by