When Spotify agreed a $43.4m deal in May this year to settle a class-action suit brought against it over mechanical royalty payments – in a case combining lawsuits filed by David Lowery and Melissa Ferrick – it was no doubt hoping that would end negative coverage of its songwriter-royalties issues.

For Chris Crawford, co-founder and CEO of rights clearance platform Loudr, it was a missed opportunity to finally fix online-licensing at scale, and prevent this becoming a recurring nightmare for services.

“I don’t think it has been addressed properly! I think there is a huge opportunity to fix this problem. The settlement is terrible because it’s basically a speeding ticket for not doing things correctly,” he says of the high-profile settlement.

“Some say $43.5m is too high and some say it’s too low –  and that depends which side you’re on. But really, at the end of the day, what everybody wants is for the right people to be paid and for stuff to be licensed before it goes live.”

Crawford feels this is a stopgap, and that to really fix the underlying problem of connecting publishing rights with sound recordings rights it is going to take more of a concerted effort across the digital music industry as a whole.

“To really solve that problem, it’s unifying the data, it’s understanding the relationships, it’s removing the ambiguity when one publisher says they own a certain percentage and that conflicts with what percentage another publisher says it owns,” he argues.

“Then it is working with the services to build a very streamlined process to allow for full rights to be secured before stuff goes live. That’s why there are these settlements. If everything had a licence secured, there would be no ground for these class actions to stand on.”

Naturally, Crawford sees his own company as part of the solution here. Loudr’s origins come from trying to find a way to let a cappella artists upload their UGC covers easily to digital services and ensure the writers were paid; but its mission has expanded from those early days.

Working at iTunes in Cupertino in 2008, he noticed there was very little a cappella music available to download (he had a personal interest in the music) and it was explained to him that, as most were covers, the rights issues proved a stumbling block for many creators and they chose not to upload their music so as to avoid licensing headaches.

The following year, Crawford set up A Cappella Records to address this, its timing serendipitously coinciding with the arrival of Glee on TV.

“The idea was that we would create an entity where the artists could upload the recordings, we would secure the mechanical licences, we would send it to the stores, and then every time sales are made, we would pay the songwriters and publishers first and then do a revenue share with the artists,” he says of the origins of the company. “Then we saw there was a lot bigger opportunity beyond a cappella music.” 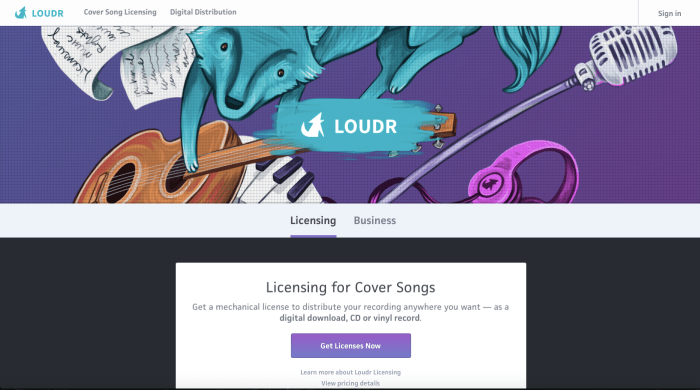 That’s when the team changed the name of the company to Loudr.

“We were very artist focused but, as we were talking to stores who were partners of ours on the distribution side, it became clearer and clearer that it was a much bigger problem in the enterprise space,” he says of the change of focus.

“Take a major streaming platform where you have over 40m unique sound recordings and, of that, the percentage that is actually matched to the correct composition is very low. Very low! No-one will go on the record to say exactly how low it is, but it is very low.”

Crawford felt that technology, and machine learning in particular, could offer a solution here at scale; but the fundamental battle everyone faced was against a cumbersome registration system that had become the industry standard despite, in his eyes, not being up to the job.

“Publisher data comes in all different shapes and sizes, but the most common form for sending publisher data around is the Common Works Registration format [CWR],” says Crawford. “That is a terrible format! Nobody likes it, but it’s what’s used. So we built a lot of systems for understanding CWR.”

The problem, he claim, was that everyone used CWR but they invariably used it differently to everyone else, so the solution lay in figuring out a consensus.

“We have all of these normalisation tools to take this publishing data and streamline it so that it can be efficiently matched or linked to the sound recording requests coming through the system,” he explains. “The way we do it is based on a lot of understanding of relationships. We have created a lot of algorithms that provide levels of confidence around the strength of a particular match or link.”

So how does the machine-learning part of it actually work in practice?

“On our system, a sound recording request comes in and all the different factors of that request are being matched against our competition database, which is continuously being updated from all the publisher feeds,” he says.

There is, however, still a human element if the machine-learning aspect runs into a wall.

“The machine learning is understanding those connections so that they can continue to inform the confidence levels behind matches. If it gets to a place where it is too close to call, that is when it will be shot over to our team to verify.”

Being based in San Francisco, Crawford is closely following the ebb and flow of music funding, an issue that has raised its head again with SoundCloud recently cutting its workforce globally by 40%, then securing a new investment round of $169.5m to keep the lights on beyond this year, while bringing in a new CEO.

“I don’t think it is built on sand,” he says of a music technology sector that has arguably normalised debt and unprofitability. “But I think there are some core parts of the underlying infrastructure that are broken. And I think that the effect of those leaky pipes means that it is much more challenging for services to get off the ground, to create a real comparative marketplace and for there to be investment in startups.”

Is this leading to a funding crisis for music? “In San Francisco we hear about a lot of great ideas in music, but the investors won’t touch anything related to music because of the rights issues,” he says, before suggesting that a service like Loudr can help everyone here.

“We want that to go away,” he says of VCs’ reticence to back music services at the moment. “That is why we are really focused on fixing that piece so that the whole industry can have a lot more money flowing through it. In solving that core piece in the underlying infrastructure, we believe that the whole industry will benefit.”

TikTok’s deadline for a US sale moves back again

An orderly presidential transition in the US may be underway at last – not that we’re counting any chickens just yet – but that raises more questions about what’s going to happen with the sale or shutdown...
Read More

Spotify has begun what ZDNet described as a “rolling password reset” of some users’ accounts, after a report suggesting that as many as 350,000 people’s usernames and passwords (among other personal...
© Copyright Music Ally All rights reserved 2020 - Website designed and maintained by