The three major labels – Universal Music, Sony Music and Warner Music – saw their collective recorded-music revenue from streaming grow to just under $1.3bn in the second quarter of 2017.

This is according to Music Ally’s analysis of the three majors’ financial results for that period, with Universal Music’s parent company Vivendi having published its financials yesterday, shortly after the latest quarterly figures from Sony and Warner.

Our analysis also reveals that WMG is currently growing its streaming revenues fastest of the three, and while UMG isn’t far behind, Sony has work to do to keep up in this particular sector of the recorded-music business.

We’ll break down our workings, since there are complexities involved in the comparison of the three majors: WMG reports in dollars, Vivendi in euros and Sony in yen for example.

Vivendi’s financials this week focused on the first half of 2017, when UMG generated €962m of recorded-music revenues from streaming. Having earlier announced a figure of €467m for the first quarter, that means €495m in Q2 – so $588m.

Running similar calculations for the first half of 2016 suggests that UMG’s recorded-music streaming revenues for the second quarter of that year were around $407m, which indicates year-on-year growth in Q2 2017 of 44.5% – although for the latter metric, working in euros is safer, which comes out as 43.1%.

Warner Music recently reported $360m of recorded-music revenues from streaming as part of its results for the second quarter of 2017, saying that this was 58.6% year-on-year growth – which indicates $227m of streaming income for the year-before quarter.

To summarise, though: the three labels collectively made around $934m from streaming in the second quarter of 2016, and $1.29bn in the same quarter a year later. Hence the 38.5% growth, and the notable trend of Warner Music appearing to overtake Sony Music on this metric. Although bear in mind this may be what we’ll refer to as ‘The Sheeran Effect’ – WMG will be keen to prove it’s not just a short-term bump.

With quarterly streaming revenues of $1.29bn for the three major labels alone – don’t forget independent labels’ income on top of that, although there’s no firm figure for it* – we can already see the makings of decent streaming growth for labels in 2017.

Cue the ongoing debates about whether music publishers are getting their fair share of the streaming boom, as well as individual artists and songwriters.

*Indie licensing agency Merlin recently revealed that its agreements generated $353m for its members in the 12 months to the end of March. That’s just over $88m a quarter, but a.) these deals aren’t just for streaming, b.) they do not include Apple, and c.) with streaming growing as it is, we’d be cautious of using any 12-month figures to March to guess at revenues for Q2. 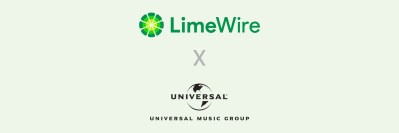 LimeWire has a licensing deal… with Universal Music Group

Music industry veterans will be forgiven for boggling at this headline, but it's true. LimeWire and UMG are now partners.