“We know that they’re the new tastemakers. And ultimately we’ve got the potential to reach millions globally. And what we’re finding is it’s not all about YouTube: it’s about how we get the right piece of content, the right personality and the right story to the right audience,” she said. 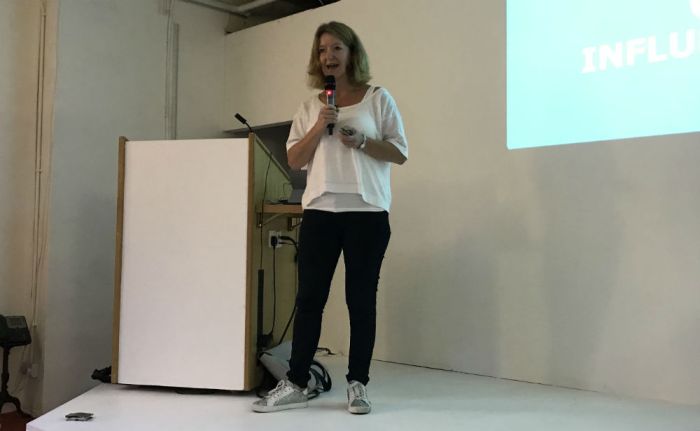 What has WMG learned? “Influencers can come in all shapes and all sizes, and also they vary dramatically from market to market. The important thing really is that we can measure results instantly with real-time data. The important thing to know is what we are looking to get out of the campaign.”

Appleton brought up the ‘a word’ – authenticity – noting the increased savviness of audiences, who know when they’re seeing something that’s been paid for by a brand (or label). “Ultimately, as long as we’re enjoying that content, we’ll stick with it,” she said.

Appleton talked about WMG’s #HowDidWeGetSoDark campaign for Royal Blood, where the label worked with Instagrammers who were working with art and photography. “You can see that the pieces they did for Royal Blood was completely in tune with what was on their channel,” said Appleton.

She also talked about measurements, with one campaign for ‘Feel It Still’ by P.T.M. leading to a spike in listens after British social stars Zoella and Alfie Deyes posted about the track.

Spotify weekly average streams jumped by 47%, Apple Music jumped 190%, YouTube views were up 76%, and it entered the Shazam chart immediately. “We in this room know that this impact of course happens. This is the story we need to be showing and educating managers and artists,” she said.

Another example: Portugese producer Kokab’s track ‘Got U (Ready or Not)’ which was promoted through fashion influencers, who wore a branded t-shirt. “We reached over a million viewers through that campaign,” said Appleton. “Hopefully we’ll all be wearing this t-shirt later in the year!”

She also talked about a blurring of boundaries. “It can be that our influencers are fans themselves. Often you don’t need to go pay for your influencer, but you need to put the time and effort into finding the fans… and then you can connect them.” One example: Evelyn Douma and Dua Lipa, because the former was such a big fan:

Appleton finished off with four tricks for working with influencers. “Be selective. Don’t just find one YouTuber that you work with all the time. Look for the right influencer with the right act, and connect with them,” she said.

“Work what you’re doing with your influencer campaigns into a wider marketing strategy, and when you get amazing pieces of post and amazing content created, don’t feel that was just one moment. You can keep resharing it, and you can use that creative in other parts of your campaigns,” she added.

Appleton also advised tailoring influencer campaigns to the individual markets that a label is working with. Asian markets are bigger for “cats and cuter content” than works in the US, for example.

“Keep experimenting! Keep trying, and be brave, and actually you can see the results come through and you can tweak and evolve from there. There’s no fixed rules: our audience will tell us what they like, and we’ll be lucky to see that.”

Meanwhile, David Emery, VP of global marketing strategy at Kobalt Music Recordings discussed Kobalt’s pre-save campaign for Laura Marling, focusing on three more generally-applicable lessons: taking time to give yourself the space for ideas; try to think how your audience thinks; and then repeat and improve rather than just doing one-offs.

A pre-save is a way of taking the traditional pre-order mechanic and making it work for streaming services: fans ‘pre-save’ an album and any pre-release singles into their playlists and collection.

“It came from me missing a release by an artist I really liked,” said Emery. “They released an EP last year and I totally missed that it came out.” But Emery was also reading Spotify’s API to figure out what a label can do on top of it.

“I went for a walk, and I just had all these things whirling around my head. What is it that we can do here? And it literally just came to me: we can use this API, make a thing that’s like pre-ordering, but or Spotify. That would work really well, and would be really quite sraightforward! The functionality had been there for years in the API,” he said.

That walk was important. “Take time to give yourself the space for ideas. No one has ever come up with a great idea sitting at their desk, doing email, on their computer. Ideas come from being out in the world, giving yourself space to breathe… Give yourself space, go to an art gallery. Get away from your computer!”

Once the feature was developed, Kobalt made sure that fans got an email when a track or album was released, with a direct link to their collection on Spotify. “That tactic of really thinking about how someone might interact with what you’re doing is really crucial,” he said.

“Try to think how your audience thinks. You shouldn’t really be taking the thought process of ‘how am I going to push this out to a fanbase?’. It’s if you’re a fan of this artist, how would you like to receive it?”

Did it work? “It by far and away exceeded our expectations of what it was going to do. The biggest pre-order experience for the Laura Marling album… it’s useful to see that as a bit of a benchmark. We’re talking thousands of people doing this as opposed to hundreds.”

Kobalt has gone on to use the technology a lot more, having built the feature to be reusable for other artists, including established artists and new acts.

Version 2.0 launched earlier this summer. New artists often don’t have a new album: they’re releasing a succession of tracks instead. “Albums are coming a lot later in how people are working,” said Emery. The new version is called ‘artist subscriptions’ applying the same concept to an artist rather than a release.

“Every time an artist releases something, it gets added to your library and you get a notification as well,” said Emery, who stressed this idea of building on previous campaigns.

“Don’t just do a one-off. We’ve all as digital marketing people gone ‘we can do this thing and it’ll be great and it’ll work for this campaign’ then the next campaign comes along and you don’t do it, because you’ve already done it… But this is a product, it isn’t a digital marketing gimmick.” 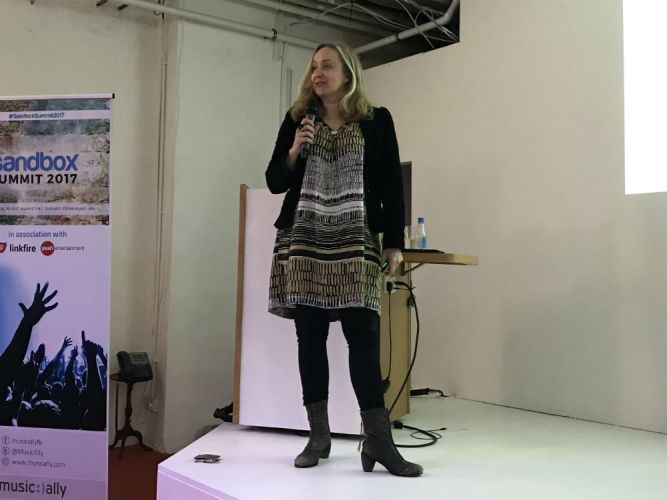 There was also experience from outside the music industry, with Lounge-Books CEO Sam Missingham – formerly head of audience development at book publisher HarperCollins.

She outlined some trends in publishing and compared them to music. “About 30% of reading happens in e format and it’s completely tailed off in the last three years. Print has had a resurgence. We don’t have a streaming platform – thank god! – so we do have differences, but we also have some similarities.”

Missingham noted how many books are published and explained that the challenge for publishers is that they have lots of books, lots of authors, but no increase in the number of readers and the time / money those readers have to spend.

“So we need to discover gems, and we cannot rely on our massive brand authors all of the time,” she said. But book marketing often extends merely to “buy this book” advertising rather than truly understanding its readers.

About 90% of books marketing is spent on frontlist books, but in genres like sci-fi there’s an excellent back catalogue “that we basically do no marketing for”. Yet these classic books can still sell strongly: as murder-mystery author Agatha Christie’s evergreen sales show.

Missingham talked about HarperCollins’ Virtual Sci-Fi Festival, which was organised to coincide with a sci-fi film festival held by the BFI in London.

The event took place entirely online with Twitter and Facebook Q&As, podcasts, blogs and live video streams – “On Google+ We didn’t have Facebook Live then…” Missingham booked The Handmaid’s Tale author Margaret Atwood as the closing Q&A, even though she was not a HarperCollins author.

One weekend there was on Twitter and Facebook a virtual festival: with author Q&As, and sessions on science, games, comic books for kids, cover design and other topics. And a Twitter Q&A with Margaret Atwood to close it, despite the fact that she was published by rivals.

Missingham noted that some of those rivals saw this as a “breach of publishing etiquette” (the equivalent in music would be Universal Music using, say, Ed Sheeran as a key participant in an event with its own branding) but she suggested that annoying rivals should not be an obstacle to interesting marketing campaigns.

The virtual festival’s hashtag was shared almost 11,000 times with an online reach of 83 million people, but Missingham said that the real benefit of the event was getting people to sign up with their emails.

“Owning your customer. Get them in a database! Do stuff that’s interesting. We have the content. We can’t compete with Amazon to sell shit, but we have the talent, we have our content and archive. We can do stuff that they can’t. And you don’t need many hardcore fans to sell a lot of product, because they are central to what we do.”

The final day of Music Ally's Sandbox Summit Global online conference had a practical focus on music marketing, with two panels of experts offering their advice. First was a 'tips from the top' session picking the brains...
Read More 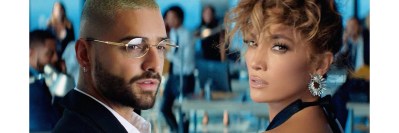 Jennifer Lopez and Maluma have just released a pair of singles together: 'Pa Ti' and 'Lonely', and like a growing number of artists, they unveiled the music videos in a YouTube premiere, yesterday. However, they also...
© Copyright Music Ally All rights reserved 2020 - Website designed and maintained by