Why the Release Radar playlist is Spotify’s secret weapon

How to get songs onto popular Spotify playlists like New Music Friday and RapCaviar is a hot topic for labels in 2017. But it seems that they’re all being outperformed in terms of streams by a playlist that can’t be pitched to: the algorithmic Release Radar.

That’s according to Bryan Johnson, director of artists and management at Spotify UK, who was speaking on a Developing New Artists in the Digital Age panel at the BIME conference in Bilbao today.

Release Radar launched in August 2016 as a companion to Discover Weekly. It’s a customised playlist for each Spotify user, updated every Friday with new releases from artists that they have listened to and follow on the streaming service. Johnson said that Release Radar is one of the key reasons artists should be getting as many fans as possible to follow their profiles on Spotify.

“The more followers [you have], the more Release Radar playlists you go into,” Johnson explained. “What we are seeing is that this playlist is becoming a huge driver of streams – more than any of our programmed editorial playlists, which are the ones that everyone pitches for. It’s Release Radar which is driving listens.” 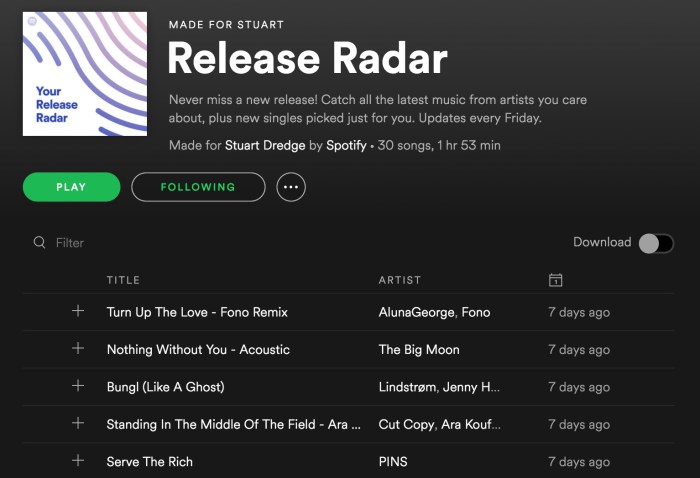 Johnson added that Spotify’s other big algorithmic playlist is also playing an increasingly-important role for labels and artists.

“We have built an array of features and tools specifically for artists to drive their listens – Release Radar is one and Discover Weekly is another,” he said. “It is user-facing but it is really benefitting artists. It will normally be in the top 10 playlists in Spotify For Artists” – referring to the service’s analytics breakdown of the top playlists for any given artist.

Another theme from the BIME panel was a challenge for artists: that they cannot afford to disappear or long periods of time, for example to record new material, if they want to retain their streaming audience.

“Staying away too long is what is hurting a lot of our artists at the moment,” said Adam Gerrard, director of business affairs and finance at independent label Captured Tracks. He suggested that acts stockpile extra tracks during album sessions to drip out as standalone singles or EPs, which can then buy them time to create between album campaigns.

“We want to be releasing singles between albums to keep some sort of momentum happening,” he said, emphasising the importance of having extra tracks after the album. “[You have] to keep the buzz rolling.”

“Be a few tracks ahead of yourself,” added Spotify’s Johnson, warning artists and labels that if they have a hit, it’s vital to have a few more in the bag to follow it up with. “If you don’t have anything else, people will get bored and move on.”

“We are in an interesting time as we are dealing in attention economics,” Johnson continued. “Gone are the days when you can just spend six or eight weeks prepping a single and then dropping it to see how it does. Now you can just drop the track and then work it. Because the track’s available, people want it; people want more and more tracks. The more individual tracks [you have], the more chances you are getting to present your music to people.”

Lucy Blair, director of international sales & marketing at The Orchard, offered her views on another topic: the importance for labels of not getting overly focused on pitching for playlist slots.

“While it’s amazing to get on playlists, it’s not the only part of your marketing plan,” she said. “That alone should not be your marketing plan… Across the industry, some people have an insane sense of entitlement and expectation – thinking that because their music is out there, it’s going to get playlisted,” she warned. “You’ve got to have a reason for people to care about you.” 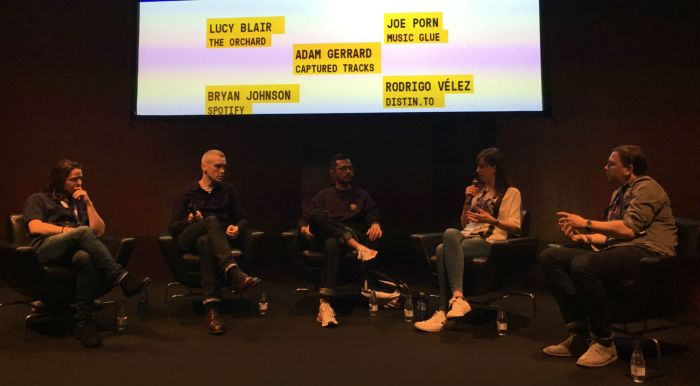 Blair was equally dismissive of an obsession with metrics for metrics’ sake – where quantity smothers quality. “Some of the industry is still obsessed with vanity metrics,” she said. “If a real engagement with an audience isn’t there, these numbers mean nothing. Vanity metrics on their own don’t mean anything if you don’t have engagement.”

Gerrard ended the panel by warning that music marketing has an obligation not to make promises that it can’t deliver on.

“It’s really important to have a story about why people should care about you,” he said. “It’s also about being very careful not to fabricate anything or have it look a little bit fake. Arcade Fire – their last album campaign [for Everything Now] kind of bombed because they tried to do too much and it didn’t come off as genuine. People saw through it.”