Spotify adds songwriting and production credits to its desktop app

Spotify is adding credits for songwriters and producers to songs on its service, although for now they’ll only appear within its desktop app.

From today, listeners can right-click on a track and choose a ‘Show Credits’ option to see the credited performers, songwriters and producers in a pop-up window: 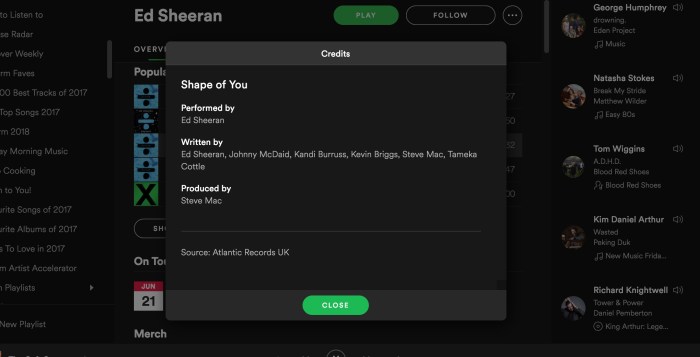 “At launch, we’re showing information we have from record label-provided metadata, and will also display the source of the credits so you know where it’s coming from,” explained a blog post from the company.

There’s a big caveat here: labels don’t always have the correct credits, for songwriters in particular. In fact, this is at the heart of some of Spotify’s legal problems in recent years: missing or inaccurate publishing metadata provided by labels.

“We realise some of the label-provided credits are incomplete or may contain inaccuracies, but this is just the first step in displaying songwriter credits on Spotify. The feature will continually evolve to become more efficient, provide better functionality, and incorporate more information from industry partners over time.”

There are certainly gremlins in some of the data: 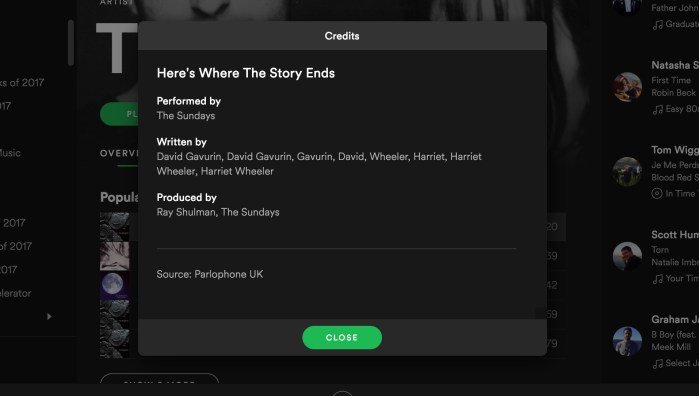 Or to take an even more famous example: Knockin’ on Heaven’s Door. The versions by Bob Dylan are correctly credited to Dylan as the songwriter. Now look for one of the many cover versions of the song by artists on Spotify. More often than not, you’ll see this: 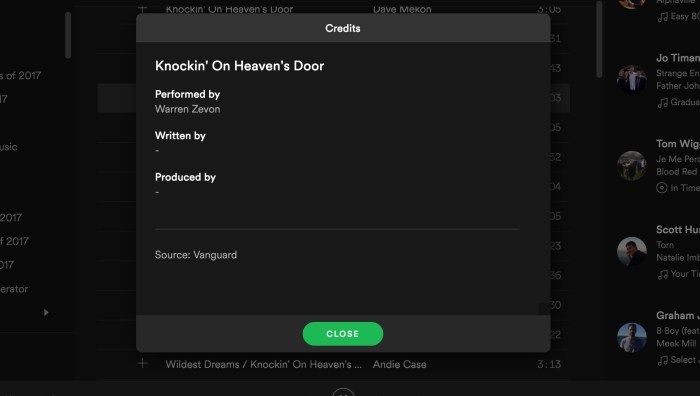 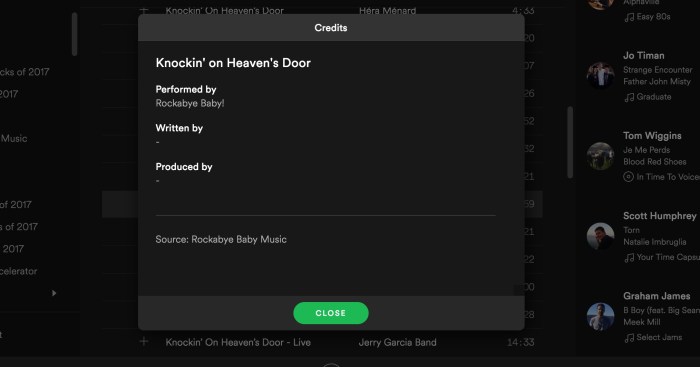 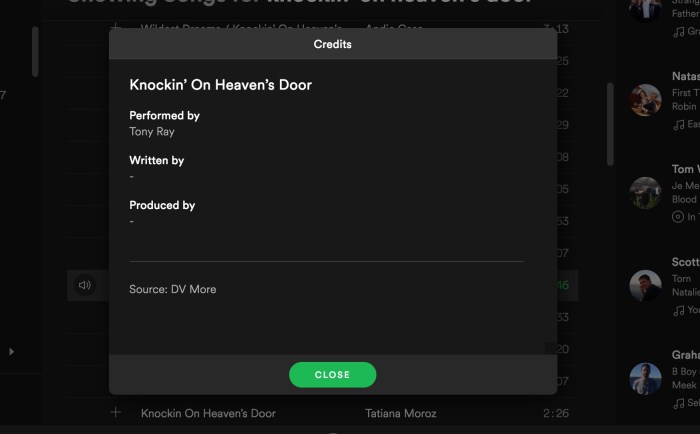 As an illustration of the missing metadata problem for modern streaming services, you couldn’t ask for much better.

In fact, all us terrible cynics if you like, but there’s an argument that making these credits public – including the inaccurate ones – is Spotify not-so-subtly getting this dirty laundry out in the open: so songwriters can see when they’re credited wrongly or not at all, with the guilty source (i.e. the label) listed right below it.

It reminds us of the moment in 2013 when Spotify published a figure for its average per-stream payout – between $0.006 and $0.0084 at the time – while also making play-counts public on its service. The company didn’t explicitly say to artists ‘Now you can calculate how much your streams should have earned, and compare that to what your label tells you’, but it was a clear implication.

Anyway, back to the present. Tiffany Kumar, Spotify’s global head of songwriter relations, is quoted in the blog post as saying the new feature aims to “increase songwriter and producer visibility and, in turn, foster discovery among new collaborators, industry partners, and fans”.

It’s a good first step on that front, but there is more work to do. The pop-up credits aren’t hyperlinks: you can’t click on a songwriter or producer’s name, for example, and go to a list of other tracks they’ve written.

Meanwhile, the visibility of the credits is limited: rather than appearing on-screen while a song is playing, they require a right-click then another click – and can’t be accessed at all within Spotify’s most important platform: its smartphone app.

Music Ally asked Spotify about the latter, and Spotify’s spokesperson told us that the company does have plans to offer the songwriter credits feature on mobile in the future, but that here’s no time-frame to announce at this point.

Even with these drawbacks, proper credits for songwriters and producers is a step forward, and sits alongside other initiatives within Spotify to court the songwriting community – its Secret Genius podcasts and awards, songwriting workshops, songwriter-focused playlists and an ambassador program, for example.

Plenty of publishers and songwriters will appreciate the credits, as is already becoming apparent:

An important and long overdue move regardless of the missing or inaccurate data. For many songwriters credit is often as important as financial reward. https://t.co/d4QUbVhVrk

(Others are… less impressed:)

Even if they welcome the credits, songwriters and publishers who’ve been criticising Spotify will not be wavering in their determination to see the company solve its mechanical licensing issues in the US, which have sparked several lawsuits on behalf of songwriters in recent years.

Credits aren’t mere window-dressing, but Spotify is well aware that it needs to continue working hard to address the fundamental challenges around how songwriters get paid from streams of their work. And as the dodgy metadata that’s now fully on display to the world shows, there’s a lot of work to do.

The appetite for publishing catalogues remains voracious out in investorland, so at this point all but the largest companies in that space can be seen as potential acquisition targets. Kobalt included. Bloomberg reported today...
© Copyright Music Ally All rights reserved 2020 - Website designed and maintained by