Lyor Cohen: ‘The music industry will recognise us as a huge value contributor’

Lyor Cohen, YouTube’s global head of music, has told Music Ally that 2018 will be “the year of music for YouTube and Google” and suggested the animosity between the video platform and the music industry will soon be a thing of the past.

“It’s too easy of a soundbite – ‘value gap’,” he said. “I believe that YouTube contributes in such a significant way to the artist community […] With the ability for us to not simply play in advertising but also in subscription, I think the music industry will recognise us as a huge value contributor.”

As part of this charm offensive, he hosted a Q&A with Dua Lipa, the artist whose ‘New Rules’ video recently passed one billion views on YouTube – the hundredth video on the platform to cross the billion threshold. Cohen was formerly the chairman and CEO of Warner Music Group until 2012 while Lipa is signed to Warner Bros Records, so there is a certain symmetry there.

Speaking on stage at the YouTube studios in London last night (19 February), Cohen interviewed the singer about her career, her tentative first steps in uploading videos to YouTube as 15-year-old aspiring performer and where the video platform can amplify everything the team around her is doing.

He claimed that, when ‘New Rules’ crossed the 1bn-view mark, he and his team “were running through the hallways screaming because we want to see you successful and win”.

She responded, “You never really expect that to happen when you first release a song or first release a video. To have the reaction it has done is pretty surreal. And really exciting. It has changed my life, really, and made my dreams come true. So I am super grateful for all of it.”

Cohen then jokingly warned her that this was merely the start and that more success and more record-breaking numbers will follow. “We are in the process of making dreams come true,” he said. “It is not over yet – just FYI. Fasten your seatbelt!”

They talked about her origins and how she used YouTube as a testing ground for her voice and, after a point, how it became her “portfolio” and way to trying to get a manager and a record deal.

She was 15 when she uploaded her first video to YouTube – a cover of ‘Mama Do’ by Pixie Lott – and said it was “terrifying” and “embarrassing” but essential as a way to build her confidence. She was not, however, just uploading for her friends and family and saw YouTube as a way to get industry attention.

“Deep down, I was hoping that someone might find me like they did with Justin Bieber!” she laughed. “That didn’t happen. But what was so great about using YouTube and carrying on posting covers was that it kind of served me like a portfolio where I would go out and meet people in the music industry [as well as] writers and producers.”

She added, “I hadn’t really written any songs, but I had these covers and I said to them that if they liked my voice then maybe we could write together. That’s how it started and I got a couple of demos under my belt.”

Cohen, underlining the armistice that is called when record companies look to YouTube for promotional (rather than revenue) support, said, “We adore working with your label. We have been incredibly collaborative with your label. It’s actually between your manager, your label and you that has been the recipe of our ability to get behind this – and hopefully we make a difference.” 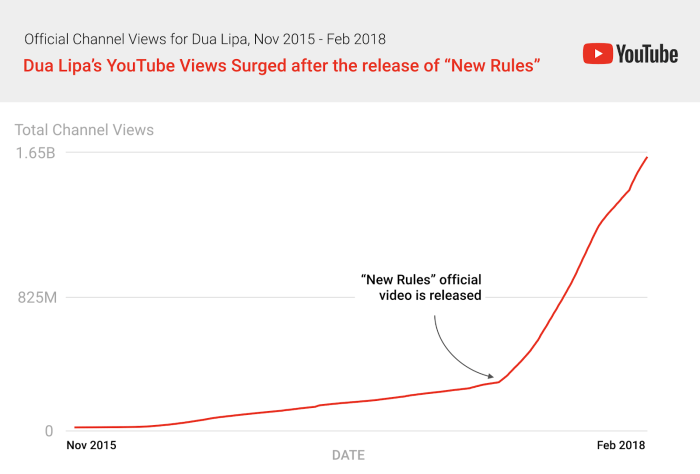 After the event, Music Ally spoke to Cohen about the role YouTube plays in marketing artists, what he would be demanding from YouTube if he was still heading up a major and why he is convinced the public spats over the value gap would soon be consigned to the dustbin of history.

What do you think YouTube can bring to the marketing of artists and amplify what acts are doing for themselves on the platform?

I think [in the past] we didn’t have an organisation that knew what was important to the labels or to the artist community at any given time. And now we’re getting so many phone calls from labels, artist managers and artists themselves asking us to work with them and understand their priorities as well as what is important to them. It has been a very healthy experience.

Dua Lipa came from the UGC side of YouTube and artists can easily build their own presence there. So what can a label add?

I think Chance The Rapper said it very beautifully: being independent is not being alone. I think artists need a layer of infrastructure and support – whether that be managers, labels, production companies et cetera – and I think it was up to the artist and the music community to decide where they want to fit in.

Do I want to be a major label that’s committed to artist development? Or do I just want to have the artistic development happen off the grid and then seize the opportunity when I see something starting to bubble and then maybe I could help at that point to bring resources and infrastructure?

The good thing about our industry is that there is no cookie-cutter way of doing anything. What I think YouTube and all the other various platforms do is give more optionality and more opportunity for sourcing artists and also [helping with] the period of artist development that takes place.

If you were still heading up a major, what would you want YouTube to be doing for you?

If I was still label-side, I would want a combination of things: I would want help in sourcing and identifying great artists and talent; I would like for them to help engage and build my community; and also know the critical moments where I could be helpful and support their efforts.

Apple Music is the latest company to offer up rich data to creators. How will you be expanding YouTube’s analytics to really assist artists?

The way I look at it is that we don’t look at the other DSPs as competition. I actually look at them as comrades in arms.

But you’ll surely want YouTube to be delivering better analytics than the competition?

Let me tell you – [it’s about] Google Analytics. In terms of a company that is based on transparency and data, I am very pleased and happy to be working for Google and YouTube. Whatever we can do to make the job of artists, labels, managers and songwriters easier through analytics, it will be our great pleasure.

Is this the year YouTube finally makes friends with the music industry and moves on from the ‘value gap’ battles?

I consider this the year of music for YouTube and Google. It’s too easy of a soundbite – ‘value gap’. I believe that YouTube contributes in such a significant way to the artist community. And to segments of the community that doesn’t have access to traditional media but who wants to build their audience – whether that’s grime or other types of music that have found their voice on YouTube.

With the ability for us to not simply play in advertising but also in subscription, I think the music industry will recognise us as a huge value contributor. All we can do is make our best efforts to do what is right and to help the community.

The story that hasn’t been written, and that should be written, is that of a highly consolidated distribution network. That is way more dangerous than anything else that this music business has to face.

From me, I would like to see the music industry – and it is starting to happen, trust me – come work alongside us and help build products and tools to make a healthier ecosystem for the artists and the labels. I think that by having YouTube and Google be successful in the process of converting their funnel, that would just be awesome – net awesome – for everybody.

Google announced some new features for its search engine yesterday, including one focused on music. “Starting today, you can hum, whistle or sing a melody to Google to solve your earworm,’ the company explained. That...
Read More

The US House Judiciary Subcommittee on Antitrust has spent the last 16 months investigating Apple, Amazon, Facebook and Google, and yesterday its Democrat majority staff published a report into their findings. You can read...
© Copyright Music Ally All rights reserved 2020 - Website designed and maintained by