How would user-centric payouts affect the music-streaming world?

‘User-centric’ licensing is where the royalties from a streaming subscription only go to the artists who that subscriber listens to, rather than into a bigger pool split by overall share of all the streams on the platform – the latter is known as the ‘pro rata’ model.

There have been calls for streaming services like Spotify and Apple Music to switch to user-centric systems, partly because it might be a good thing for smaller artists and labels, and (recently) because it might help them to tackle stream-fraud.

But what is really the difference between the existing and user-centric models? A panel at the by:Larm conference in Oslo today explored the topic.

Pokkinen started, with some findings from a study conducted in Finland, which we wrote about last December when she spoke at the Slush Music conference in Helsinki.

The study involved four organisations in Finland: the Finnish Music Publishers’ Association, the Musicians’ Union, the Finnish Society of Composers and Lyricists, and the Society of Finnish Composers. It was funded by the Ministry of Education and Culture, and used listening data provided from Spotify – based on all its premium subscribers in Finland in March 2016.

The research took a random sample of 10,000 tracks to represent the whole material – although an additional test with a 50,000-track sample was also done to verify the results. The sample included tracks from 4,493 individual artists, which were listened to 22,496 times by 8,051 users.

“What Spotify was very clear, was that these user IDs were totally anonymised. Even the researcher didn’t know who were these people,” said Pokkinen.

Currently, when someone pays Spotify a subscription, 55-60% goes to the labels and performers for recordings, 10-15% go to the songwriters and music publishers, and the streaming service keeps 30%. The research focused on the entire 70% payouts, rather than separating the recording and publishing elements.

The conclusions? “The researchers found that you can divide the tracks and the artists in Spotify into three different categories. The majority of artists, around 90% of them, get only a few individual streams,” she said – referring to their number of streams in the sample.

“Then the mid-tier, about 10% of the artists, get dozens of streams. And then the top tier is only 0.4%, but they get the most streams.”

“None of these artists in the top tier got more revenues in the user-centric model, so they all lost money,” said Pokkinen. “The difference between the two models is it’s clear that pro-rata favours these few at the top of the pyramid.”

The user-centric model is a bit more complex. Each track’s share depends on the total number of streams and the individual listener’s habits. The only artist group that got almost the same financial results in both studies were those popular with many different listeners.

“As the overall stream count decreases, the revenue difference between the user-centric and pro-rata model grows,” she said. The user-centric model favours artists and tracks with a smaller amount of streams, but the positive financial effect is not automatic, depending on the habits of their listeners.

“If you look at the final report… some artists in this middle and basic tier would lose, and some would gain. It’s not 100% sure. One thing is sure: the money would come down from the top of the pyramid, so the top tier would lose.”

This is the third report on the user-centric model, following Danish (link) and Norwegian (link) studies. So dare we any closer to a decision?

Bringsjord: “I don’t really care who loses, who wins on user-centric model. In our association we have a principle point of view: let’s have the user-centric model, and to make it a little more complicated, we also want minute-clicks,” he said. So royalties to be paid by listening time, not by streams, which he sees as fairer for longer classical and jazz recordings.

Brataas: “This has been a discussion for quite a long time. We won’t get any further by getting more research, although its always interesting to see what the consequences might turn out to be… I think it’s an artist/fan relationship thing, which is good. It’s the only holy thing we have in the industry, so if this adds value to that, it makes sense to me.”

Pokkinen said that after the Finnish study was published, the conclusions were not the biggest topic of debate: it was the surprise from music fans about how the pro-rata model worked – they didn’t know that their money wasn’t only going to the artists they listened to.

“I agree with Larry: it also has to take into account the length of the music,” she said. “And the next step has to be more concrete.”

Nordgård suggested that the argument should be consumer-focused: less about redistributing money, and more about fans feeling that their subscriptions are supporting their favourite artists directly.

How might all this lead to change? “These reports we’ve seen don’t really rock the boat. Nobody’s losing a total amount of money, it’s just some differences. The people that can change it is the people who are delivering the music to the services: the international record companies, the independent record companies. We have to agree before we talk to the bosses in Spotify. If we don’t agree, it won’t happen,” said Bringsjord.

“I haven’t yet met a musician who doesn’t want this user-centric system… we all want it, so we have to work together to make it happen,” he added.

Robøle gave views from a publishing perspective. “We want a sustainable industry, and if user-centric is going to make it more sustainable? My focus may be even before that,” he said.

“Spotify has cost €9.99 a month for 10 years now. They have to raise the price. First of all raise the price. You need minute-based [payouts]. You have to force them to pay mechanicals in all territories. That’s going to lift the low end. Those are the things that are really going to make a difference. And if we can do that AND do it user-centric, then fine!” 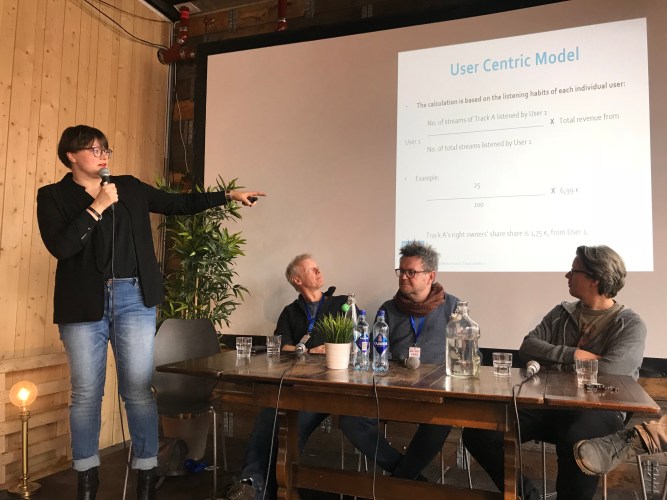 Pokkinen suggested that there could be benefits for Spotify in switching to a user-centric system: for example, a boost for its number of paying subscribers.

“I believe it would be a good PR stunt for Spotify to change to this. I believe that many people would be willing to pay this 10 euros if they believed they could make a difference with the money,” she said.

Robøle also drew attention to the popularity of playlists on Spotify – they drive 31% of its listening, according to its DPO filing. “People listen to what comes next in the playlist, which makes it less probable that they care that much,” he said.

The panel talked about the recently-revealed ‘Bulgarian scam’ with a company uploading 35-second tracks to Spotify, arranging them in playlists, and then registering 1,200 premium accounts to stream them round the clock, and make royalties.

This scam wouldn’t work under a user-centric system. If nobody else was streaming those tracks other than the 1,200 fake accounts, the maximum royalties would be 70% of the money spent by the scammers on the subscriptions.

Pokkinen came back to the issue of fairness. “For me this is a big question about what is fair. If Spotify and the streaming services become the main way to consume music, it’s really important for the indie labels and smaller genres to get a fair chance to make money,” she said.

She did add that a user-centric model isn’t necessarily about pulling revenues away from major labels and towards indies. “I think indie labels would gain but major labels wouldn’t lose that much, because of the back catalogue,” she said. “It could even be a win-win!”

Bringsjord said he expects “a fight to make this happen” in Scandinavia. “If we work together, it will happen. If we just talk about it every year at by:Larm, it won’t happen.”

Pokkinen was more optimistic about the discussions ahead. “I have this feeling that when we get really active, it won’t be a big fight. I have talked with some major CEOs in Finland, and I know that some of them really favour user-centric, because they are music lovers and they want to be fair,” she said. “So that’s the next step, to start the discussions. And I am not awaiting a big fight.”

The panel addressed some of the potential obstacles for user-centric models, from the processing costs of implementing these systems, to concerns that it might be harder to audit the streaming services.

Brataas added a cautionary note, noting that streaming has been having a positive effect on the wider industry, and on individual labels and musicians. “We need to make sure we don’t break what we already have: it’s an important thing to maintain and take care of,” he said.

Pokkinen, meanwhile, asked if anyone could confirm the rumour that Spotify had originally planned to use a user-centric model when it launched, before switching strategy to the pro-rata way of calculating payouts. Nobody could. “It’s a good rumour though! Tell your friends,” she joked.

You can read the comparative study commissioned by the Finnish Musicians’ Union here.

The latest study of what a shift from 'pro rata' to 'user-centric' systems of streaming payouts means has been published.
Read More