In early February, Apple revealed that its Apple Music streaming service had 36 million subscribers. A month on, and that figure has increased to 38 million.

The new figure was provided by the company’s SVP of internet software and services Eddy Cue during his appearance at the SXSW conference in Austin, Texas.

It’s a significant announcement, because adding two million subscribers in a month suggests Apple Music is now matching the growth-rate of Spotify.

Spotify sees its free tier as the engine for its paid-subscriptions growth, but for Apple Music that role is clearly being played by time-limited free trials. Cue said last night that Apple Music currently has eight million triallists on top of its 38 million subscribers.

Music Ally’s view remains that comparing Spotify and Apple Music’s numbers isn’t the main story: instead, that’s the combined growth of these services (plus Amazon) on a global basis, allied to the growth of local streaming services in key and/or emerging markets.

The rising tide rather than just which boat is catching the biggest wave at the time, if you will. And in fact, the *real* story is about how much further that tide can and will rise, which Cue clearly agrees with.

“If you look at the number of subscribers Spotify and Apple Music have together versus the number of people listening to music around the world, or even the amount of traffic to our App Store – we have half a billion people visiting the App Store every week – music is just ‘this big’ in the scheme of things,” said Cue, making a gesture showing how small ‘this big’ is.

“There are easily two billion people in the world who can afford to pay for some level of music, yet Spotify and Apple Music combined have only around 100 million subscribers globally. There’s a huge gap there… We both have to grow by a significant amount in order to get to the numbers that we should be at.” he continued, suggesting that the real opportunity for music is less about Spotify vs Apple Music or even about labels. 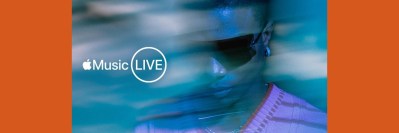 Apple Music is getting back to its live roots by returning to the Roundhouse venue in London for a concert.