Why did Lyor Cohen take the job as head of music at YouTube in 2016? In his keynote speech at SXSW today, the music-industry veteran explained.

“My greatest fear at the time was that distribution was going to be too highly consolidated between Apple and Spotify. It was scary that this could be a two-horse race,” said Cohen. “I wanted YouTube and Google to be successful in the music business in order to bring diversification to distribution.”

[Since that point, Amazon has emerged as a third horse in the race, with a reported 16 million music subscribers]

During his SXSW keynote, Cohen also provided some more details of YouTube and Google’s plan to merge their music services into a new offering, combining ad-supported and paid-subscription tiers.

“We know we’re late to the party. We’re making enormous investment to launch a product that you will be proud of. It combines the best of Google Play’s context server, and the breadth and depth of YouTube’s catalogue,” said Cohen.

“We’re going to collaborate and work closely with our label partners to understand their priorities, and help them promote and break artists. Breaking artists is still my drug. I get to do it here at Google and YouTube, on a massive scale, around the world.”

Cohen reminded the audience that 80% of watch-time on YouTube is driven by its recommendations engine, and said that this will be key to the new streaming service.

“We’re now layering in a programming division solely focused on building and growing the playlists ecosystem that users would love across both paid and ad-supported tiers,” he said, before outlining more goals for the new service.

“We’re dedicated to giving artists and labels and managers the best direct-to-consumer access of any platform available. Spotify and Apple are pure retailers. Snapchat and Instagram are simply social,” said Cohen.

“The most powerful aspect of YouTube is our ability to let the artist, mangers, publishers, songwriters and labels to engage with their fans, with no hoops to jump through. Whether it’s promoting a video or an album, or a live stream, the only place in the industry that you can play both in commerce and direct-to-consumer is YouTube.”

Cohen talked about the process of getting the YouTube job, having originally been asked by the company’s chief business officer Robert Kyncl to suggest possible candidates for the role, before Kyncl asked Cohen to take the job himself.

“I realised that this was an opportunity for me to help Google and YouTube to work in harmony with an industry that I love, and to build a healthy business together,” said Cohen.

“I’m focused on bringing diversity to distribution. We do that by adding subscription business on top of YouTube’s already-growing advertising business. The industry is going to return and grow by ads AND subscription.”

Cohen’s message was a call to rightsholders to see YouTube as a friend rather than a foe, despite ongoing arguments about the ‘value gap’ and other aspects of Google’s business.

“Let’s seize this moment and this opportunity for us to work back to back with one another, and build a really incredible and healthy business,” he said.

Earlier in his keynote, Cohen talked about his early years in the industry, from short-notice road-managing Run-DMC on a European tour – “Their road manager is on a cocaine binge and we can’t find him, and he’s the only one with a valid passport!” – to starting Def Jam with Russell Simmons.

“All the elements that anybody needed to start a fire was present: fuel, oxygen and the spark. The fuel was rap music. The oxygen was the Downtown scene, and the spark was our innocence,” he said.

“It was that burning desire for us to start a rap label, uncomplicated by the idea of how absurd it was. Had we known anything, we would have ran for the hills.”

While speaking warmly about those early days, Cohen also addressed the recent allegations of sexual harassment and assault made against Def Jam co-founder Russell Simmons.

“I want to acknowledge the awful allegations that have been made about Russell. There is no question that Russell and I are very close. We didn’t just work together. We were roommates. And we stayed friends and partners ever since,” he said.

“I never saw him aggressive or violent with any women. It’s not the Russell I know. I’m deeply troubled by all the allegations, and there’s absolutely no room for this type of behaviour.”

Cohen also talked about the emergence of the web, and the music industry’s declining fortunes as peer-to-peer filesharing took hold.

“I didn’t feel threatened: i was focused on the music. I saw the internet for what it was: the best possible way for an artist to get their music heard. People were getting access to everything they wanted. The power was shifting into the hands of consumers,” he said.

“Eyeballs were moving from traditional TV to a new startup called YouTube, at a very rapid pace. Advertisers were getting hip to it: they saw the enormous opportunity.” 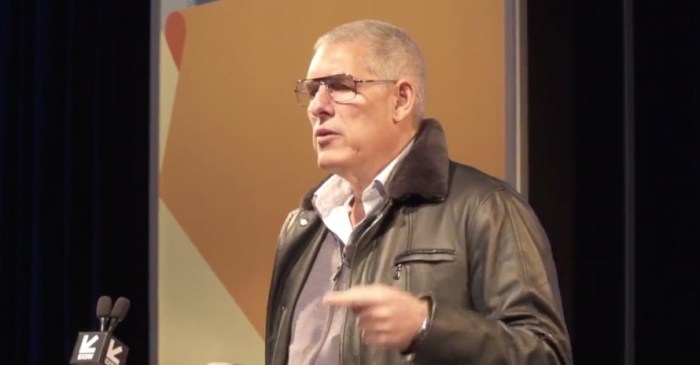 Long before taking his current role, Cohen was signing one of the first big music-industry licensing deals with YouTube, in 2006, which gave the service permission to stream Warner Music’s videos in return for a share of advertising revenues.

“Many of us in the traditional music business were worried about these companies… we feared these new developments were going to hit us so hard in the pocket-book. And sure enough, it was a lot of change. Unfortunately, like all change, there was a period of painful transition,” he said.

“There are people in the traditional music business who were defending the old distribution model because they were making so much money. They didn’t know where things were going to stop and end, and they played very defensively.”

“It was a very difficult period, and a lot of incredible people lost their jobs. But I embrace change. I’m built for it. And so I thought that this change is going to be ultimately of huge benefit for artists and labels… Between advertising and subscription, this was going to be a period when fortunes were going to be made, and I wanted to play in it.”

Complete with an on-stage DJ – D-Nice, no less – Cohen’s speech regularly came back to the idea of embracing change, and stressing that while he works for YouTube, he remains a music man.

“I love being part of this business. There were so many of my colleagues tired of all the disruption and all the zigs and zags that this industry has gone through,” he said.

“But I’m a different type of person. I love change. I’m open to change. I’m excited for change. And more importantly, I love music.”