Spotify held its ‘investor day’ event earlier this evening, revealing that it will go public on 3 April in the process. You can read our liveblog of the event here. But what did we learn from the nearly-three-hour series of presentations from Spotify’s management? Here are some takeaways to chew on.

In the past, rivals have attacked Spotify as little more than a search box connected to a catalogue of music. A “utility” according to Jimmy Iovine when Apple Music launched. “30m songs and a search box and good fucking luck,” according to Pandora’s former CEO Tim Westergren as his service prepared its own premium launch.

But Spotify is trying to turn the tables now, suggesting that its strength is “discovery” while its rivals are still focused on “access”.

“Spotify is different. We’re not just about access to music. We’re about discovery,” added CMO Seth Farbman later. “Until recently Spotify was more like a search box. Listeners had to come to us and know what they wanted to listen to… Today, Spotify is much more powerful,” added CEO Daniel Ek. 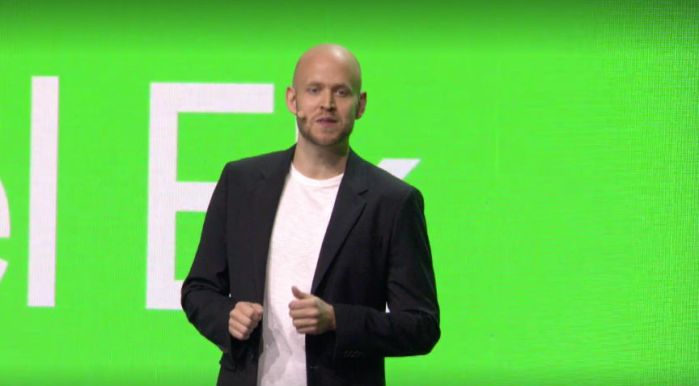 2. But does this make Spotify a gatekeeper or not?

The discovery message is being hammered home, then, but there are some possible contradictions emerging in Spotify’s belief that it is sweeping away the old industry dynamics of a handful of ‘gatekeepers’ to music discovery, without becoming such a gatekeeper itself.

Ek talked about those playlists “putting Spotify in control of the demand curve”. Every month, there are 10bn ‘discoveries’ of artists – first plays of their music by listeners – with half of these coming from Spotify’s playlists.

“Making it onto one of our playlists can literally change an artist’s life, and the global appetite for Spotify’s playlists is only increasing,” said Ek. And yet: “We don’t believe in gatekeepers. We’re simply providing more outlets for artists and labels to build their audience.”

Charlie Hellman from Spotify’s artist tools team riffed on this: “A music meritocracy, where an artist’s success depends on how they connect with fans, not how they connect with gatekeepers,” he said, almost exactly mirrored by global head of creator services Troy Carter: “Our editorial process is a unique meritocracy in an industry that was once controlled by just a handful of gatekeepers.”

Yet Spotify must be prepared to face scrutiny over its own gatekeeper status: about how its playlist-pitching system operates and how fair it is, and about how its algorithms work – a delicate subject: the more information it shares on that, the more attempts there’ll be to game those algorithms.

This is one tension at the heart of Spotify’s relationship with the music industry: the service sees itself as devolving power to artists and fans, but the sheer scale of its ‘algotorial’ also gives it growing power, and responsibility.

3. Smartphones and emerging markets are key to growth ahead

One pair of stats that got a couple of prominent mentions during the Investor Day event: “There are 1.3bn payment-enabled mobile phones in use, yet only 12% subscribe to a music subscription service,” as premium boss Alex Norstrom put it.

“Spotify owns half of that existing 12%. I think you can see the potential… We estimate our total addressable market to grow to three billion in the future.”

This isn’t just about the west. In fact, Ek named some of the key territories on his company’s hitlist. “We’re working on launching in some of the biggest markets in the world: places like India, Russia and Africa.” 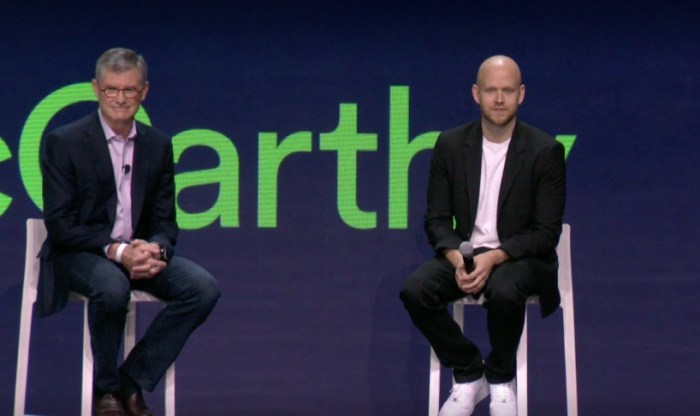 4. Don’t expect a speedy rise in the price of a Spotify subscription

If Spotify wants to improve its margins, should it consider raising its prices? Netflix is often held up as a successful example of this: for example raising its standard sub from $9.99 a month to $10.99 last October, while still growing its base of paying customers.

CFO McCarthy (formerly at Netflix) pushed back at this question when asked by an analyst, suggesting that Netflix hadn’t adopted such a strategy in its earlier, growing years.

“Early in the life of a new market, and particularly because of the scale advantages… the smart strategy for us, and I think Daniel and I are aligned here, is to play the market-share game,” he said. So no price rise in the immediate future.

At the moment, subscriptions account for 90% of Spotify’s revenues and advertising for 10%. The company’s CFO Barry McCarthy wants to change that.

“I’d be thrilled if we could double the revenues as a percentage of total. It remains to be seen if we can do that,” he said. “There’s an $18bn ad market in the US and it’s bigger globally. And in the US, the labels get paid nothing for radio play. Someone in streaming is going to eat that marketplace, and the labels are going to make a lot of money.”

On-platform advertising will be an important part of this, with some encouraging signs about its impact for artists and labels that make use of it, with two examples cited during the event.

Rapper Lil Pump ran a pop-up ad within Spotify and saw a click-through rate of 30%, driving a million streams for his debut album. Meanwhile, pre-sale ticketing promotions to superfans on Spotify sold more than a million gig tickets in 2017. 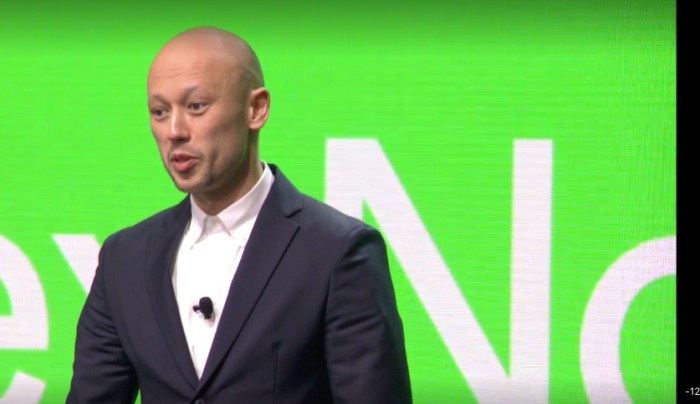 There were quite a few mentions of ‘lifetime value’ of subscribers, as well as reminders that Spotify has a very youthful audience (“72% of our users are under the age of 34, and 43% are under the age of 24,” said Ek) who by definition hopefully have a longer lifetime ahead.

McCarthy made the case for Spotify’s economics looking better as people stay with the service for longer. “Once a free user converts, it takes us an average of 12 months to recoup the cost of acquiring that subscriber. The longer they stay, the greater their lifetime value to Spotify,” he said.

“One: the faster we grow new subscribers, the more money we lose when they join the service, particularly in seasonally-fast periods of growth. Two: the longer they stay, the more profitable we become.”

McCarthy left investors in no doubt that profits aren’t the immediate priority for Spotify though. “Between growth and profit, you should expect us to manage for growth.”

7. Spotify sees scale and data as its competitive advantage

But it was also clear that Spotify sees its scale, and the data that it’s harvesting from its listeners, as a key competitive advantage over rivals too.

“Today we have over 200 petabytes of music data,” said Soderstrom. “We believe that with our larger user base and our higher user engagement, the distance to the competition is actually only increasing… Already today, we have more than five times the amount of music data that our nearest competitor does.”

He even compared music-streaming to the world of self-driving cars, where the more vehicles a company (like Google, or Uber) has out on the roads generating data, the better its chances of success in the long-term.

“We have by far the most cars on the road in terms of users, but importantly they’re also driving more hours a day than anyone else, so more miles. And we’re putting more cars on the road every day, because of our free tier… This is self-driving music!” 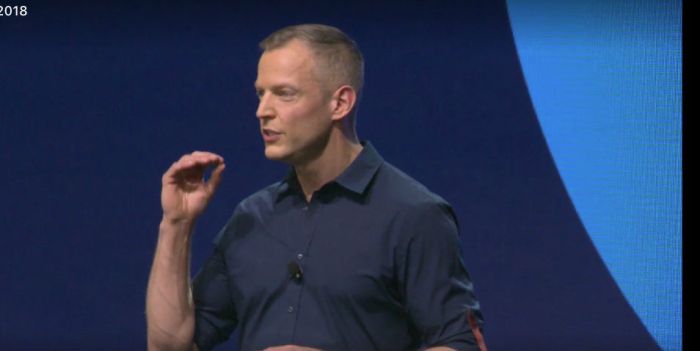 8. Platform neutrality as a strength, not a weakness?

Spotify is already lobbying for regulators to keep the big-tech companies honest when it comes to ‘access to platforms’, but for investors, the company is pitching its position as a strength.

“We are the only streaming service that is truly platform-neutral,” said Norstrom. Meanwhile, Soderstrom said Spotify’s play for ‘ubiquity’ gives it an advantage over rivals.

“As we’re watching the incredible growth of these voice-controlled speakers… we’re watching the home become multi-platform, and more heterogenous, running different operating systems on different devices from different providers. Not these single ecosystems. And that’s exactly why we made this bet on ubiquity,” he said.

One useful stat: 73% of Spotify’s streams now come from mobile and connected devices (e.g. speakers) versus 27% from desktop computers. So the access to platforms / ubiquity issue really is key to the company’s business.

There’s been a theory doing the rounds that, after Spotify and Tencent Music executed their recent share-swap, the two could team up next time they have to renew licensing deals with labels, and flex their combined muscle to drive the terms down.

Daniel Ek didn’t outright deny that when asked, but he did argue that the deal is about other things. “Our view is that the Chinese market isn’t necessarily very favourable to western companies… so our view was we wanted to get exposure to that growth,” he said.

Come back in two years’ time to see if that remains the case.

The music and video-streaming worlds have very different dynamics: in music, a service really needs the entire available catalogue, while in video, a portion of it can suffice.

That means the incentive to fund and produce your own ‘originals’ is much greater in the video world than in the music world. Netflix makes original shows and films, but Spotify doesn’t sign artists to recording deals.

In music, the argument might be that disintermediating labels (by signing artists) can bring Spotify’s royalty commitments down and thus improve its margins. But the company is very keen to reassure labels that this isn’t its strategy.

“Some people say that Spotify is disrupting the music industry, but really I think we’re just part of the evolution of the industry. We don’t want to replace anyone. We want to make everyone better. And more efficient,” said Ek, who later described the ‘Spotify will ape Netflix’ theory as a “fallacy”. “The path to achieving greater gross margins in the future is the platform business…”

Spotify's next original podcasts are coming from a partnership with kids entertainment brand CoComelon.
Read More