Amper Music: ‘AI’s not going to replace your job – it’s going to change it’

“Our goal is to write music as well as John Williams, which then sounds like it’s recorded at Abbey Road and produced by Quincy Jones. Obviously we’re not there yet…”

No, this isn’t the latest ambitious young band with an eye for a pullquote. It’s Drew Silverstein, CEO of startup Amper Music. And the music he’s talking about will be created by an AI, not by human musicians.

As he admits, Amper isn’t keeping Quincy up at night just yet. The company’s technology is mainly used to create production-music for online videos, TV shows, games and films. However, it has been branching out.

Earlier this year, Amper Music was one of four AI-music tools – Google’s Magenta, IBM’s Watson Beat and startup AIVA being the others – used by musician Taryn Southern for her ‘I Am AI’ album. It was pitched as the first long-form musical collaboration between a human artist and AI technology.

In March, Amper announced a $4m funding round, following the $4m it raised in March 2017 while it was part of the inaugural Techstars Music accelerator program. The new round was a good excuse for Music Ally to catch up with Silverstein, and hear about the company’s ambitions.

He certainly has a knack for soundbites that will excite some investors and enrage some musicians in equal measures.

“Amper will become a foundational infrastructure in music creation, in the same way that Microsoft Word is for documents,” for example. Also: “Every piece of music will be made in collaboration with our technology.”

However, Amper’s CEO is also willing to acknowledge the concerns within the music community about the possible impact of AI composition technology on the livelihoods of human musicians.

“There are two camps of individuals, which really speaks to how people react to AI: they’re fearful of it or they embrace it. And there’s no right or wrong answer to this,” he says.

“One side are the individuals who see AI as a technology that can help them accomplish their goals, and can draw a line between the technologies they already use – computers, audio editors, Photoshop: things that help in creation – and Amper or AI music as being the next step in that.”

And the second category? Those are the people who see AI as a threat to the way they make a living from music.

“We didn’t jump in the fire a million years ago. We learned not to hang out with lions all day long. So it’s a very natural reaction: ‘Hold on, if I perceive this as a threat to what I do, I’m naturally going to resist it’. It’s biology, so I understand it.”

Some of these comparisons accidentally undermine the argument that AI is a useful tool rather than an existential threat. Humans don’t hang out with lions because lions WILL eat humans given the chance. Not leaping into fires is a wise move because you WILL get burned.

However, Silverstein has more to say on AI’s potential to be a helper, not a career-killer for human musicians.

“AI’s not going to replace your job. It’s going to change your job, absolutely, in the same way that writers’ jobs changed significantly when they went from a typewriter to a computer, or graphic designers going from pen-and-paper to Photoshop,” he says.

“The jobs changed, but they still exist. They’re just different. And just like anything else where there’s disagreement, if you take the time to sit down and listen to people who disagree with you, there’s a lot more common ground.”

“We are musicians. We are composers. We’re not coming at this as data-scientists, or as people who saw a business opportunity and wanted to make money. We’re coming at this as creative individuals who want to help creativity.”

It’s interesting that Amper Music worked with Taryn Southern on a creative level, much like rival Jukedeck recently collaborated with a group of K-Pop songwriters and producers on a musical project, or like AI-remixing startup AI Music built a studio and invited musicians in to use it.

These companies are all trying to understand how human creativity works, as part of their efforts to improve their AI tech that mimics those processes. Silverstein says that was the most interesting thing about Amper’s participation in the ‘I Am AI’ project.

“What was enlightening was understanding Taryn’s process, as she used our web app – which is specifically designed for non-musical video editors, not musicians – to solve the creative problem that she had,” he says.

“It helped us to understand how we can build better tools for that specific use-case: or actual musicians. And when you hear that human collaboration with AI on the radio, I’d argue that you wouldn’t know. You don’t listen to it and say ‘Ugh! AI!’. That’s a pretty watershed moment.”

Does this mean Amper is going to use part of that new funding round to build more tools for artists to create with AI? Silverstein is careful not to commit to anything in the near future, saying that as a small and growing company, Amper has to be “very judicious” in how it allocates resources for now.

“But we do think about the opportunity around musician-specific tools, and in some ways it’s an inevitability. I’ll say this: in 20 years, Amper will have done a musician-focused AI! There’s just a question of timing, and prioritisation.”

He adds that Amper’s API, which can be used to put its technology inside other companies’ software and devices, may be another route to this goal. “The game? The teaching app? We’re not going to build all of those, but we absolutely have the desire for others to do so.”

While Amper is planning to get more bodies on the ground outside the US following its funding round, the API is also clearly a priority for the company as it tries to judiciously allocate those resources.

“If you’re a platform on which people post content, the last thing you want to do is have your users upload something and then it gets flagged, and have to tell them ‘sorry…’” says Silverstein.

“So the companies you mentioned certainly fall in to the category of distribution platforms. The day when Facebook and YouTube and Snapchat, when Amper’s in all of them, will be a great day for very obvious reasons!”

“But they are not all the platforms. There are probably hundreds, if not thousands of content-distribution platforms of significance, that either see or likely would see Amper as a really valuable thing to help them.”

There’s something really interesting here to think about though. Whether YouTube and the ‘value gap’ debate or Facebook’s recent licensing deals, the music industry has tended to think of social, user-generated content platforms as a problem to be solved around licensing existing, copyrighted music, and tracking its usage so that creators get paid. 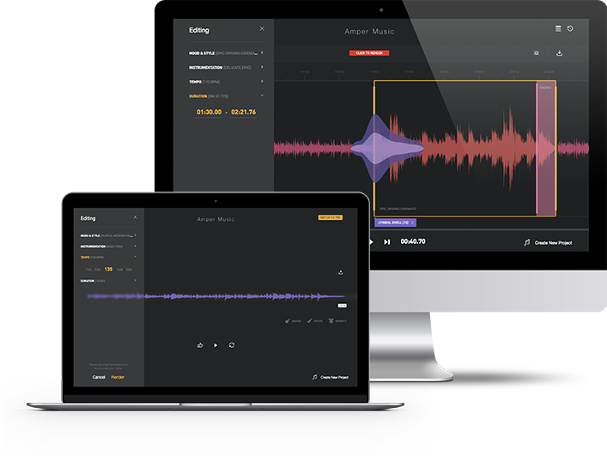 That’s an important problem to solve, but we should also be thinking about the next steps: a future where AI music-creation tools created by startups like Amper and Jukedeck could be part and parcel of those big social platforms, with (potentially) hundreds of millions of people using them to create music.

The prospect crops up when Music Ally asks Silverstein a question sparked by the Taryn Southern collaboration: about how AI-created music sits within the industry’s current structures for registering and tracking usage of songs, and its notion of what an ‘author’ is. What does AI composition mean for collecting societies, for example?

“For the PROs, there’s going to be a really big challenge around how they deal with AI music because of the magnitude at which AI can create. How many songs does BMI or CISAC or ASCAP register every year? Let’s say it’s a million,” says Silverstein.

“Amper could create 100 million songs this year. I don’t think we will! But we could. And that level of scale is just not something that existing systems and processes are designed for. That’ll be a really interesting challenge to solve.”

The obvious response may be to scoff: an AI might be able to make 100 million songs a year, but how many would be any good? And how many of those would actually be listened to.

But then you think about this kind of tool being embedded into, say, any one of YouTube, Facebook or Instagram, and the potential video views from the resulting videos. Or even if this tech was just a part of the major podcasting platforms.

The existential question rears its head again here: would that AI music be replacing human-made tracks that could be generating royalties for their creators? But the question of the sheer scale of creation that’s capable with AI is certainly something to think about.

(AIVA’s AI has already been recognised as a composer by French collecting society Sacem, which may be giving that PRO an insight in to some of these issues.)

“Every time you lower the technological bar for the creation of music, you see more creation happen. So if you go from having to be somewhat musically-trained to make a piece of music to a situation where every single person with access to an electronic device can be a composer and write music, you’ll have a lot of new creators making a lot of new stuff,” is Silverstein’s take.

“The numbers add up really fast, whether 70 people hear it or one person hears it. There’s value in knowing that if you a create a thing, there are rights to it. It’s nice to know that the thing you created is yours, or partially yours. It’s not like ‘Sorry, you just created a baby, but you can’t have that baby, because you used in-vitro technology’.”

There’s one more zinger to come, as the conversation turns back to what human songwriters will make of all this, and whether companies like Amper can win over the people who don’t think their technology will deliver on the promises, as well as those who think it will and think the consequences will be bad news.

“We’re never going to win everybody over. If you think about art, great art can be controversial!” says Silverstein. “The first time someone ever painted a nude woman, hundreds of years ago, there would have been uproar. Or think about when The Rite of Spring was first performed: there were actual riots…”