That was based on the company’s cost of sales – including royalties – increasing by 135.9% to €36.1m ($44.5m). Note, that puts SoundCloud’s cost of sales at just under 72% of overall revenues – not so different from other streaming services. 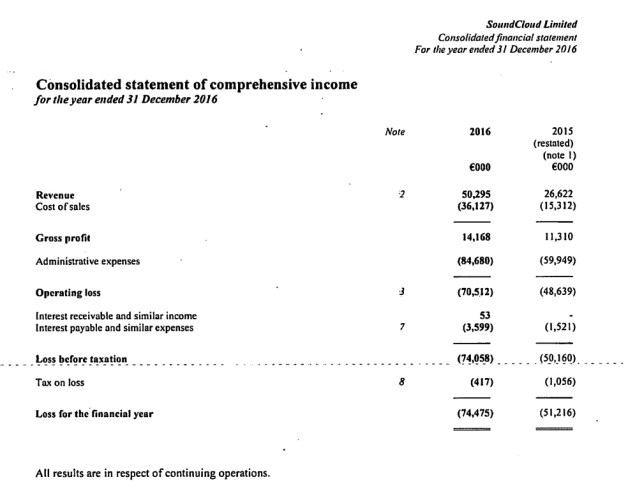 What’s more, 69.3% of the company’s revenues came from the US, according to the results. SoundCloud averaged 296 employees in 2016 – just one more than 2015 – with total staff costs of €38.6m once salaries, share-based payments, social security and other pension costs are factored in.

The results also refer to events after 2016, including the $170m of investment in August 2017 led by The Raine Group and Temasek. The report notes that since August 2017, the ultimate controlling party for the company is SoundCloud Holdings, based in the Cayman Islands.

Importantly, given warnings in past financials for the company, SoundCloud’s directors state that “they have a reasonable expectation that the Group has adequate resources to continue as a going concern”.

2016 feels like a long time ago now, given SoundCloud’s eventful 2017 – a year which included the appointment of a new CEO, former Vimeo boss Kerry Trainor. And in fact, Trainor recently talked about how that year went financially for SoundCloud, saying that the company surpassed its revenue goal of $100m in 2017.

That would indicate at least 61% growth, while Trainor also said that SoundCloud had “significantly reduced the burn” and even recorded a few “cash flow positive months”.

We should know more on that by the end of September this year, which is when SoundCloud is due to publish its 2017 financials.

This story was amended on 17 April to correct an inaccurate figure in the penultimate paragraph: the indicated growth is at least 61%, not at least 38%.

As a public company, Anghami will be publishing regular financial results, giving an insight into its growth amid intensifying competition from global DSPs.
Read More