The global recorded-music market was worth $17.3bn in 2017, up 8.1% on 2016 in what was a third consecutive year of growth for the industry. This is according to the IFPI’s Global Music Report, which is being published today.

No surprises in terms of what’s driving this. Music-streaming revenues grew by 41.1% to $6.6bn, and now account for 38.4% of all recorded-music revenues – the biggest single revenue source.

Those streaming revenues break down into $5.57bn from audio-streaming services (both ad-supported and subscription) and $856m from video streams.

Paid-subscription audio streams, meanwhile, grew (in terms of revenue) by 45.5%, as the number of people using music subscriptions grew to 176 million – up 64m on 2016.

What’s with Europe? Two of its biggest markets – Germany and France – still have a sizeable proportion of their revenues in physical, so are affected more by the decline in that format. German industry body BVMI had already revealed a 0.3% decline in revenues there last year.

Like any music-industry body revealing encouraging growth in 2018, the IFPI also delivered some warnings, focused on the ‘value gap’ between usage of music on free, ad-supported video services (i.e. YouTube) and the revenues it generates for rightsholders and musicians. 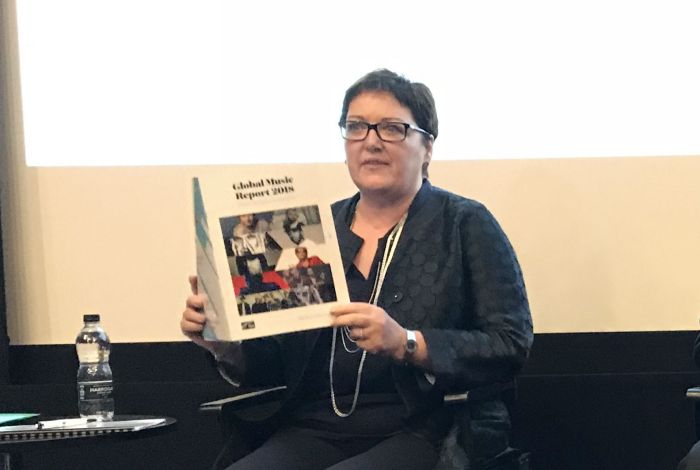 “We’re still only 68.4% of the size we were at our peak in 1999,” said CEO Frances Moore at the IFPI’s press conference in London this morning.

“The race is far from won. We still have a job ahead of us… Much as the industry can do a lot on its own, and has done a lot, there is a structural fault in the system, in the market, where there is a real mismatch between what user-uploaded platforms are making from the content, and what they’re returning to the rightsholders.”

“Until we fix that structural defect, there will always be a struggle to keep the growth in the marketplace… We’ve had three years of recovery, but a lot depends on the intervention of governments to help us fix the market.”

The stats being wielded by the IFPI this year in support of this view include that streaming revenue breakdown: $5.6bn of revenues from paid and ad-supported audio streams from 272 million listeners, compared to $856m of ad-supported video-stream revenue from $1.3bn users.

(That latter figure was calculated by the IFPI based on YouTube’s public figure of 1.5bn logged-in monthly users, cross-referenced against the body’s own surveys in 13 countries suggesting that 85% of YouTube users used the site for music in the last month. Add that to services like Vevo, Vimeo and Dailymotion, and that’s where the 1.3bn figure comes from.)

Representatives from the three major labels at the event chose to focus on positive aspects of the industry’s current growth.

“We’re not getting complacent. We fought hard to get here after 15 years of decline, but there’s still plenty of room to grow,” said Stu Bergen, CEO, international and global commercial services, at Warner Music Group.

“The world’s second largest music market, Japan, actually declined last year, as did Germany… But we can approach our challenges with confidence and a new sense of optimism.”

Bergen also highlighted the growth of China, which has just broken into the top 10 music markets for the first time – it’s tenth – on the back of a growing streaming economy fuelled by companies like Tencent Music and NetEase.

“We estimate that only half the world’s population live in a thriving music market, and we want to bring the streaming revolution to everyone,” he said, while also hailing Facebook’s licensing deals and the emergence of smart speakers as positive trends in the west.

“Even while our business was in decline, we kept the faith and doubled down on investment. Now that the industry is recovering, this investment is only accelerating,” he said. “We’re all well aware that the next global superstar is as likely to come from São Paulo as from Suffolk.”

Sony Music’s president of global digital business and US sales, Dennis Kooker, said that “paid streaming is the fuel for the industry’s growth” while also picking out smart speakers as an important trend.

“A key area where we’re seeing an expansion of music listening is in the home. Music is back [there] in a way not seen for some time,” he said, noting that labels are “creating artist-marketing campaigns focusing on voice” while looking forward to the expansion of smart speakers into cars. 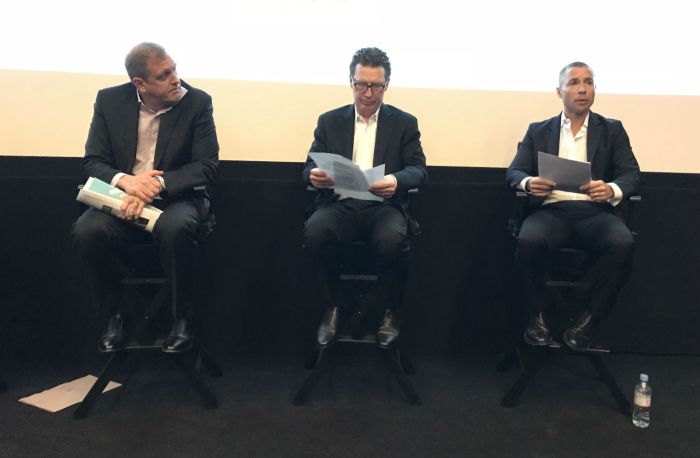 Universal Music Group’s EVP of market development, Adam Granite, talked about the cultural change within his company. “We’re no longer a product-based music company, but a music-based entertainment company… right at the centre of connecting artists with fans,” he said.

Granite also focused on emerging markets’ potential. “Across China, India, Africa and the Middle East there are over four billion people. The populations of the top nine music markets total a little over a billion people combined,” he said.

“Those massive populations have not traditionally been part of our global industry, but the path for reaching those four billion people is now illuminated by smartphone penetration and the growth of streaming services.” And also the data plans necessary to link the two.

“China is now the tenth biggest music market in the world, and nearly one billion fans there are engaging with music services,” he said.

“Streaming is just starting to take hold in India, which now has among the lowest mobile-data costs in the world… We are confident that [in the future] it will join the top 10 music markets globally… And Africa is particularly exciting. It has the youngest median age in the world… and the potential for African repertoire to travel to other continents is immense.”

One tense moment in the press conference was sparked by a question about whether the recorded-music revenue growth in China is coming from advances paid to labels by streaming services to secure their catalogues, and how that money is being accounted for.

Revenues in China grew by 35.3% in 2017, including a 26.5% rise in streaming revenues, but Moore said that the IFPI is working hard on how it quantifies that income.

“There is a special footnote regarding China,” she said. “We are, as an industry, transitioning from a minimum-guarantee situation towards transactional data. This year we have been very cautious with regards to what we see in China, but we sould be in a position next year to report totally on transactional data.”

UMG’s Granite said that his label is “working with a variety of platforms there to develop a paid streaming business” before Moore shut down further questions on the topic of specific deals in China, and the terms involved.

One final point. Last week, consultancy firm Midia Research put out its own figures for global recorded-music revenues in 2017 – for the record, its headline figure of $17.4bn nearly matched the IFPI’s of $17.3bn.

Midia also claimed that revenues generated by artists without labels grew to $472m in 2017, adding that “up until now, this section of the market has been left out of measures of the global recorded music market” – a clear reference to the IFPI’s annual report.

The IFPI does not agree with this statement, however. The body tells Music Ally that its Global Music Report is not just based on revenues reported to it by IFPI members.

Instead, this is cross-referenced against data supplied by digital music services and by charts and sales compilers (for example GfK, Nielsen and the UK’s Official Charts Company) as well as other checks and balances. So the IFPI’s position is that label-less artists’ recorded-music income *is* counted in its figures.

This piece was updated to correct a misheard figure from Adam Granite: ‘a little over a billion people’ for the top nine markets, not 1.9 billion people.

As the music business scraps it out with every other industry for Covid-19 relief, a key part of its argument has been the economic value created by the industry. An aspect that's at least well-rehearsed, since it is also...
Read More

A group of 110 bodies representing the creative and cultural industries are keeping up the pressure on governments and European policymakers over their post-Covid recovery plans. Impala, the IFPI, ICMP and ECSA are among...
Read More

Covid-19 to ‘wipe out’ five years of songwriter royalties growth

Good morning! It's us again, bringing you a whopping serving of bad news. Well, there are positive things in global collecting societies body Cisac's latest annual report too, for last year, but the organisation makes it...
© Copyright Music Ally All rights reserved 2021 - Website designed and maintained by