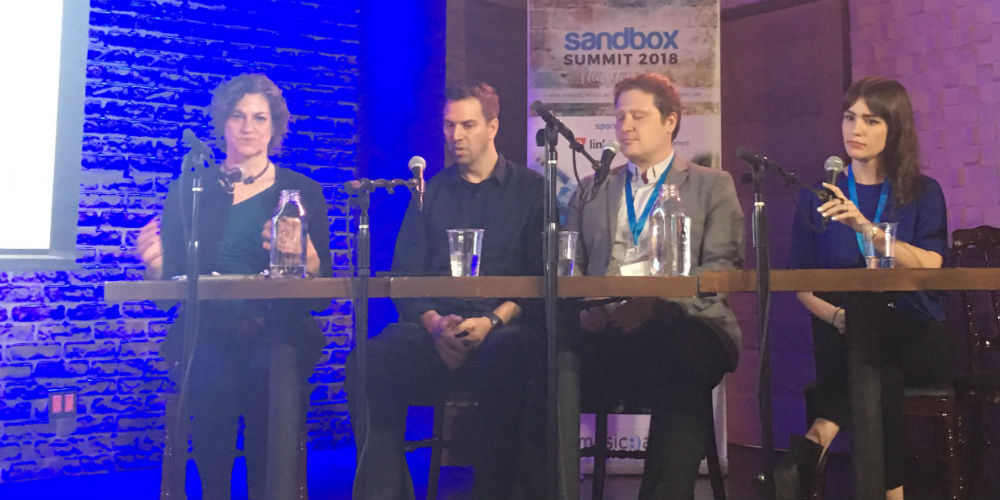 At Music Ally’s Sandbox Summit NY conference today, the discussion around music-marketing trends inevitably touched on smart speakers and voice assistants, with a panel session focusing on the implications for labels and artists.

Chaired by Vickie Nauman, the founder of CrossBorderWorks Consulting, there was a lot of debate about how voice-activated speakers were pushing streaming music deeper into the mainstream consumer market and the challenge was how to best harness this as it hits scale.

“Voice caught everyone by surprise – possibly even Amazon,” said Nauman of why the technology is gathering a head of steam.

“Voice activated speakers can bring a whole new group of people into streaming – less tech-savvy audience,” proposed Eric Fristchi, EVP of marketing and business strategy at mTheory, but caveated that it was working well for “young genres” (like pop and dance) but that the real opportunity will come when it does the same for genres aimed at older audiences.

Margaret Jacobi, director of artist and creative marketing at Onerpm, said, “In a streaming economy it has been amazing.” Bu lots of questions still remain for her, with metadata being the thing that will make it sink or swim. “How do you make sure your music is surfacing and connecting?” is the question she feels the industry as a whole needs to be asking.

Fristchi proposed one way to unlock the potential as through storytelling. “Fans really connect with stories,” he said, before adding that this narrative focus needs to also apply to the song titles themselves. “We are also working with artists to make sure they have memorable titles for their playlists that don’t compete with the other ones the services are using.”

Jacobi was not, however, convinced the mainstream crossover moment was as imminent as some of the loudest evangelists are proclaiming. “The technology has to get to a place where it is easily accessible across all demographics,” she said of where she feels it has to move to really take off.

For Fristchi, there is a need to have a much broader range of playlists precision tooled for voice-activated speakers. “Hopefully there will be a diversity of playlists and not the top 100.”

Edward Ginis, co-founder, of Openplay, talked about the importance of using lyrics as a way to match request and how this has to become more rounded and inclusive. “They become very valuable components,” he said of lyrics but added there remain some doubts over just how that can be surfaced.

For him, the speakers have to use voice as the bedrock but need to also have a visual component – something that will happen as the technology evolves and the user demands become richer. “We will see a hybridisation of lean-back listening and some visuals projected on the wall,” is how he envisages it moving forward.

There was, however, some concern that some of the major streaming services building their own speakers (Google, Amazon, Apple) will lead to a ghettoisation of listening.

“Are we entering into a new walled garden?” asked Nauman, pointing out how HomePod pushes Apple Music, Alexa pushes Amazon Music and so on.

“I like to talk about the one speaker to rule them all,” said Jacobi but accepting that is a pipe dream for now. “Every single speaker is tied to its respective service and that doesn’t make it easy.”

She also added that the lean-back listening experience that is increasingly native to these types of speakers is the antithesis of marketing. “As a music marketer, that is not what we want,” she said, adding that marketers want people to know about the name and background of the act. They want as much context as possible so that the technology can unlock as much engagement as possible. Amazon Show is going some way towards solving this, she said, but she wanted this to go much further.

Fristchi ended by saying that it is still in its infancy and we can parallel it with the early days of Spotify. Back then, he says, Spotify was just a blank search bar and users, overwhelmed by choice, just played what they already knew, but their listening become much broader and promiscuous when playlists made their impact felt. This, he felt, is the step change we need to see with smart speakers so they become much shaper and smarter marketing channels.