YouTube launches a range of music charts in 44 countries

YouTube is launching a series of new music charts based on popular songs, videos and artists, which will roll out initially in 44 countries.

They will include a new ‘Trending’ chart as well as what YouTube says are “improved” rankings for the top songs, videos and artists on its platform. The changes were announced in a blog post this afternoon by YouTube Music product manager Chris Clark.

The Trending chart – described as “YouTube’s first dedicated external signal of the most viewed new music on the platform” – will be updated multiple times each day. It is being positioned as a way to track the new music bubbling up and breaking through on the platform. 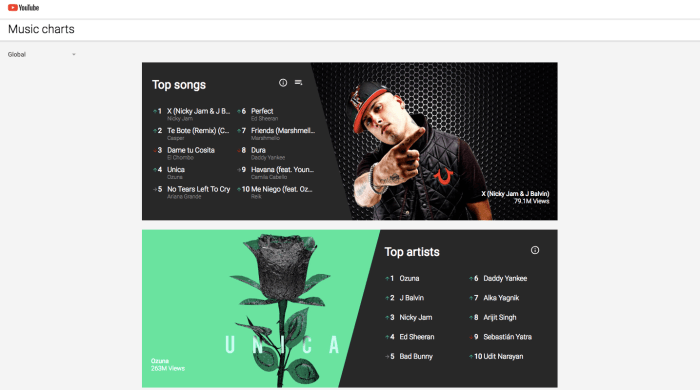 The Top Songs chart collates data from different versions of a song, including official videos, lyric videos and user-uploaded videos that use the bulk of the original recording. It will be updated every Sunday at midday PST.

YouTube says that it has a measurement system that de-prioritises tracks that have been around for a while, to ensure the top end of the chart is not clogged up by music videos that have accumulated billions of lifetime views like ‘Gangnam Style’ and ‘Despacito’.

“It is calculated by how much a song is taking off relative to its age; if something connects right away, it will do better on the trending chart,” explained YouTube. “For older videos, it would be possible to get on the trending chart but more unlikely per the relative weight given to recency and velocity.”

For the Top Artists chart, plays across an act’s entire video catalogue will be counted across multiple iterations of tracks: official videos, lyric videos, remixes, collaborations, official live versions, UGC that uses the bulk of the original track, and audio-only tracks with static images or pack shots. This chart will also be updated every Sunday at 12pm PST.

Finally, the Top Music Videos chart is the rundown of the most-watched official videos on the platform. It will be updated at the same weekly interval as the others. 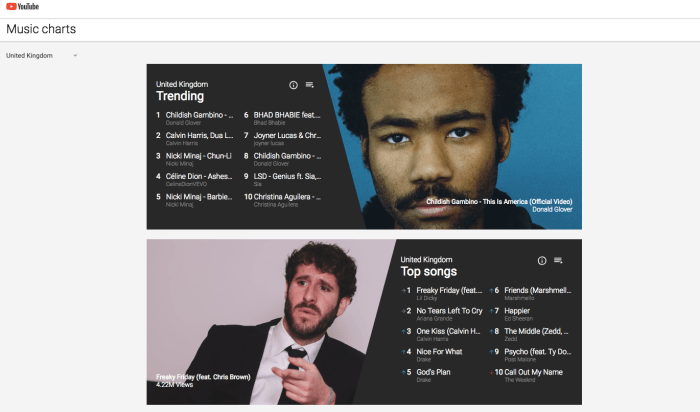 Music Ally spoke to Candice Morrissey, head of music partnerships for EMEA at YouTube, ahead of the launch of the new charts to find out more about the chart methodology, and what it says about YouTube’s wider music strategy.

YouTube has been sitting on this data for a long time, so why wait until now to create these charts?

“We did have some trends available in our Music Insights tool. The idea here was to offer more lenses and to give it more geographical spread.

The top trending videos are something that have always been shared, but top songs and top artists are the result of a lot of investment in the backend from us. We also wanted to make sure it was locally relevant.”

On the surface this appears more of a consumer-focused play than an industry-focused one. Why?

“I think it’s both, actually. It is interesting for the consumers to see what is trending on YouTube and it opens them up to discovering new music; but it is also interesting for the industry. We see our charts as being very complementary to the existing official charts [in multiple markets].

In the official charts in different markets, they are paying more credit to paid consumption – but we are just reflecting pure consumption, namely whatever is popular with our users across the world. It is a very different type of metric which is also very useful for the artists.

In some territories we know that people [in the music industry] are relying quite a lot on YouTube data points, so that is one way to give back credit to these people who are investing on YouTube and shows how popular they are among everybody, not just paying subscribers.”

Many markets don’t use YouTube data in their charts, so will there be a disconnect between your charts and the official national charts?

“Even in the US, YouTube is not part of every single chart, although Billboard had included some of our data in some of their charts for a few years now.

In most other territories, we are not part of the charts. That is something we want to continue to investigate with every single official chart company in each of the territories. It should be complimentary. Because it is not going to be just [based on] paid streams, then it going to reflect something different.

We have looked at how our charts will compare to the official charts. There are some genres which are more deeply rooted on YouTube – like rap and grime in the UK –  and they come up more in our YouTube charts than in the official charts. Content which has a strong visual component, like a very strong video, [also does well].

But we still want to be working hand in hand with the official charts in each territory.”

Is this an olive branch to be included in official charts? Or a “screw you” as you can do your own charts?

“No, I think it’s different. It’s about celebrating the success of people who make it on YouTube. That serves a different purpose.

We still want to be partnering with official charts, of course. But with the higher percentage of paid streaming, downloads and sales being taken into account in all the charts, our charts are very different. Hopefully it is a service that the industry is going to find useful.”

Will disputes over the ‘value gap’ always prevent you from being included in other charts?

“I don’t think so – and I hope not! We are a valuable player in the industry in any case.”

You have based your charts purely on views when creators and content owners increasingly seem to regard play time and subscribers as the best metrics of success. Why focus on views here?

“Even inside YouTube, we moved a little bit away from views towards watch time and subscriptions. [They feed into] the algorithm, but that doesn’t mean that is what makes sense for the outside world generally speaking. In the music industry, views and streams are more relatable and everyone looks at them.

We want [the charts] to be useful. Having a chart for the top subscribed channels or the top watch time would have a lot of value, but less so than keeping the views – something which is very well understood throughout the world and which everybody is looking at. We want it to be useful for people looking at the charts, so that is why we decided to go for views.

We are including the real digital footprint of those artists on our platform. It is not only the official content for the top songs – it is also the uploads from the fans. So, if the vast majority of the song is included in the video then it will show up as well.

That means if there’s a lot of buzz or tributes around a song, those videos will also count.”

How much of the video will have to be watched for it to count as a play? Is it 30 seconds like on Spotify?

“We don’t have that same 30-second threshold [as others]. The way that we count a view on YouTube is less than that – but we want to make sure that the view is an active view. We do a lot of de-spamming to make sure that no one is gaming the system.

To be completely transparent, we don’t have a clear [public] definition of what a view is on YouTube just because we don’t want people to know how to trick the system.”

Do you put a cap of the number of views a user can play a video in a day to safeguard against abuse?

“We don’t have that in place as we really want to count any proactive view as a view.”

Why add another chart to the landfill of charts already out there?

“I think there is a value in having more data rather than less. It is about how every label and manager aggregates the data and makes it useful for themselves. Things that we are thinking about next for the evolution of our charts are adding more geographies. We launched in 44 territories, but we want to launch in many more.

[We want to develop] mechanisms to export those charts more easily for people to use. On launch we will have the playlist exportable, but we want to make it easier to send information to everyone in the industry so they can aggregate that in whatever way they need.”

Will this mean that markets outside of the UK, US and Swedish centre of gravity for pop will start to change the look and feel of the global charts?

“Over the past few weeks we have been testing out the charts to see what they look like. For the global charts, obviously [that will happen]. But for the local views, that didn’t prove to be true at all.

In France, for example, there were more French artists than even in the official charts in France on certain weeks. So, it seems that local consumption is still quite powerful in the local markets.”