20 music/tech startups are finalists in this year’s Midemlab contest at the Midem conference in Cannes. This afternoon’s last session saw the experiential technologies startups showing off their products and platforms.

Enhancia from France was pitched by CEO Damien le Boulaire (pictured above). He talked about the frustration of trying to play a keyboard with both hands, while raising one of them to control an effect. Its main product is a connected ring called Neova that enables musicians to control instruments through hand gestures. It comes with a hub that connects to a computer or a synthesizer as a MIDI controller. “Any gestures can freely be assigned to any parameter of the sound,” he explained.

It has also developed a virtual synthesizer called Plume. The main audience for Enhancia’s products are keyboardists. The business model for Neova is selling the product for $350, with partnerships afoot with music-hardware companies too. Can the device be replicated easily? “For the hardware it’s not that hard to copy, but the real value of the product is in the gesture recognition,” he said. “There are rings already existing, but we are the only one that has this real-time gesture recognition.”

For now the product is a prototype, but 20 have been sold in that stage. The company has just ended a Kickstarter campaign, pre-selling 381 devices, which will be delivered in 2019. 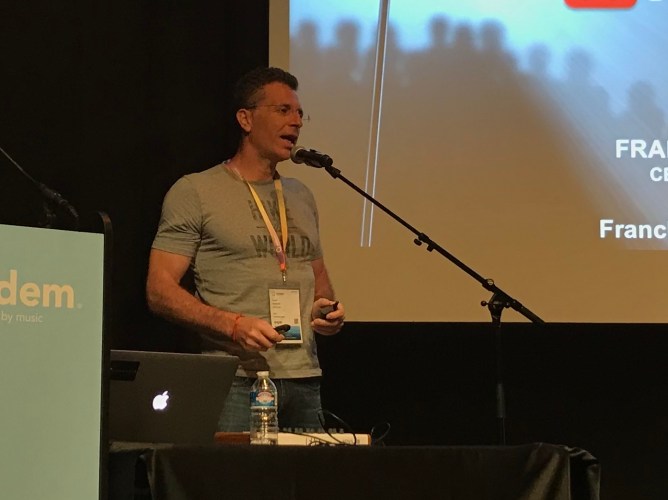 WowTune from Hong Kong was pitched by CEO Franck Nazikian. “We have created a unique technology that allows us to reproduce human voice of speaking and singing,” he said, showing a demo recreating Donald Trump’s voice using “bad-quality samples” found on the internet. The business opportunity here is to reproduce celebrities’ voices to produce brand new content.

“We could have Michael Jackson to record brand-new songs!” Or to use celebrity voices for voice-control systems (like Alexa). But the biggest, he thinks, is the upcoming WowTune app, which will allow users to create up-to 15-second video clips with original voice and music content.

So, a teenager could choose a Jessie J track and sing along, and when they are finished add some filters to change their voice “to a celebrity, to a monster or to a princess” – some filters will be free, and others will be premium. They’ll also record a video, which also has some optional filters. The results can be shared on various social networks, including the WowTune community.

Brands will also be able to create their own channels on WowTune: a Nike might encourage users to produce WowTune videos featuring its own products, and reward them in some way for the best ones. Are there any issues around the misuse of people’s voices? “We want to be very straightforward on that. Part of the business model in the premium filters is to license the voices of celebrities, and to pay them for that. We absolutely do not want to have our technology to be misused,” he said.

“Today the advertisement business is sick!… What we modestly are planning to do here is to have Generation Z produce commercials for Generation Z, and to be paid for that,” he added. 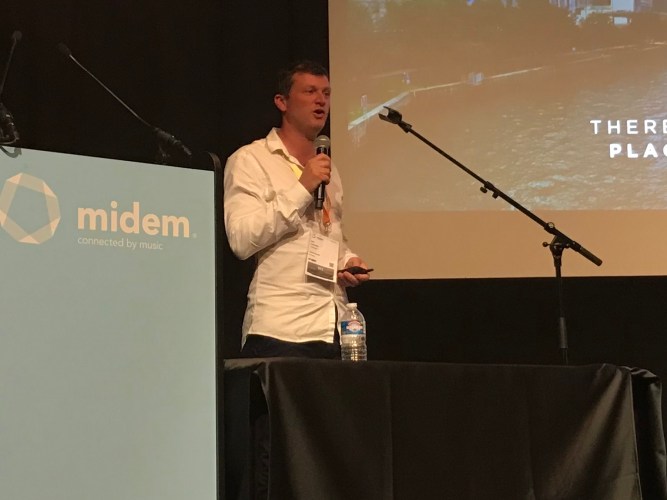 Landmrk from the UK was pitched by co-founder Seth Jackson. It’s been pitched as ‘the Pokémon Go of music’: a platform that “provides digital scale to physical experiences”, inspired by the success of the creature-catching mobile game. He noted that Nike’s SNKRS campaign has taken that idea on, with virtual pop-up trainer stores.

Landmrk is a mobile web-based platform, which has made €500k of revenue in 2018 so far, and has been interacted with by more than 1.2 million people around the world. Marketers use it to place digital content anywhere in the world, tied to physical locations. Fans visit those locations to get the reward: a piece of digital content (for example a music track from a brand new album).

Its campaign for Shakira attracted more than 250,000 fans, for example. “We call this idea kinetic currency: you can physically move people in exchange for a reward,” said Jackson. The company started with music, but is now working with clients in other industries. Alt-J, Keith Richards, James Vincent McMorrow and Rise Against are among the artists who’ve been involved. Latin American boy-band CNCO is another example, splitting their video into 4,800 frames and scattering them around the world, then challenged fans to find the frames to unlock the full video.

Landmrk can also use time, date, weather, city data and even Uber pricing as inputs, alongside location, he added. The company is raising a medium-seed round at the moment, and Jackson thinks that there is a huge opportunity to scale. “We’re completely white-labelled; everything is branded as the brand or the artist,” he said. For now Landmrk is the platform, but the client builds the campaign using its tools – albeit with advice if needed from the company.

Competitors? “Our friends at Google! They’re quite good at mapping,” he grinned. He also cited location-based games like Snatch as building an audience that can be advertised to, but said there aren’t yet any direct competitors providing these kinds of tools for brands. And its rates range from around £5k to £30k. 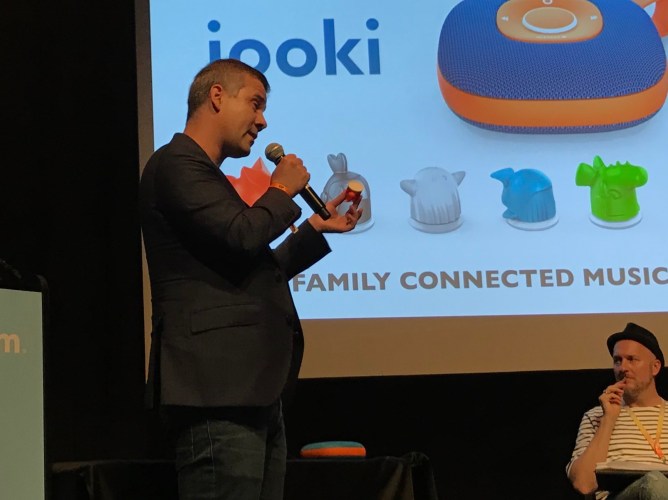 Jooki from Belgium was pitched by CEO Theodore Marescaux. His product was inspired by his daughters asking him to play a song, but he handed his phone over. “The phone disappeared, the kids disappeared behind a screen, and I was behind their backs every two minutes checking what they were watching on YouTube… kids and screens are kind of a drama,” he said.

Jooki is a smart speaker that plays music, triggered by kids placing physical characters on top of it – with parents creating playlists and linking them to the individual characters. It has a partnership with Spotify, and is beta testing an integration with Deezer. The company is hoping to piggyback on the success of figurines sold in the games industry, with games like Skylanders or Nintendo’s Amiibo toys.

Jooki launched a Kickstarter in the summer of 2016, and delivered the product to backers in December 2017. “What we’re busy with right now is opening platforms, and high-profile retail in Europe and the US… We’ve shipped more than 2,000 units to date,” he added. “30% of those devices are used every day, and 90% of them are used at least once a week, and that is fairly stable since we launched the product.”

Jooki will start selling online this year. It estimates it can do 120k units a year, and perhaps 500k units by 2021. The device costs €199, with the characters averaging €4 at retail as extras. And the company is currently raising €2.5m. “I really hope kids will remember Jooki as you and I are remembering our first iPod,” he said. Could a Disney produce this itself? “Disney doesn’t produce hardware,” he replied. 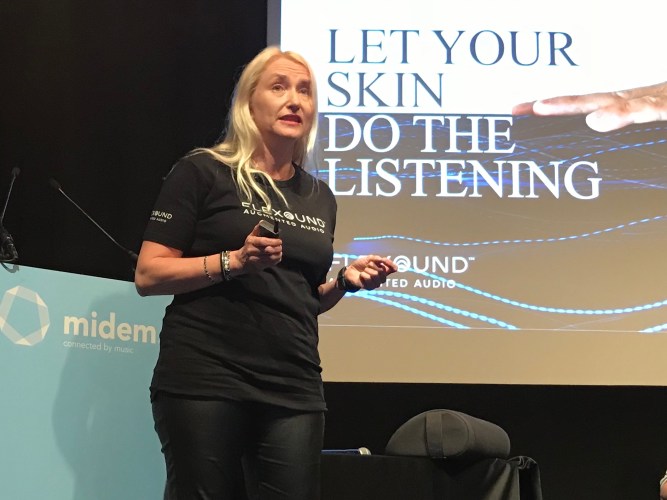 Flexound from Finland was pitched by CEO Mervi Heinaro. It’s about “augmented audio… we can add the sensation of touch to any music, and any sound,” she said. And this is combined with hi-fi, binaural-stereo sound. Its technology can be integrated into soft things that come into body contact: beds, cushions, cinema seats and car seats, for example.

The business model is licensing the technology to other manufacturers, who then integrate it into their own products. “It’s comparable to the business model of Intel or Gore-Tex,” she said. The company has made pilot products, and expects a turnover around €1m this year. “We have signed a letter of intent with a global automotive player,” she added. “We’re looking to become the globally leading augmented-audio company, and we’re aiming high.”

The company has a product available commercially: the HUMU augmented-audio cushion, whose second-generation version launched on crowdfunding site Indiegogo this week. “We’re determined to make this the next big thing in music. Why should we only listen with our ears? Music is so much more!” she said, of the wider technology. 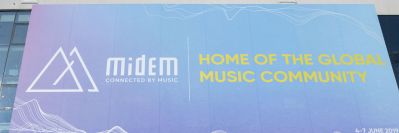 This year's Midem Digital Edition conference is underway online, and yesterday it included the announcement of the winners of the 2021 Midemlab startups contest.
© Copyright Music Ally All rights reserved 2022 - Website designed and maintained by