20 music/tech startups are finalists in this year’s Midemlab contest at the Midem conference in Cannes. This morning’s first session saw the music creation and education startups pitching their wares.

Voice Magix from Spain was pitched by CTO Georgi Dzhambazov (pictured above). He showed off a demo of a technology that detects lyrics in an audio source, and then displays the lyrics in time to the track. It could be used for karaoke apps or streaming services that synchronise lyrics with songs.

The key here is that Voice Magix is using artificial intelligence, rather than humans. “Our product is the first solution to automate that process: it can replace partially or totally the humans,” he said.

The business model is a €3k-€5k a month subscription plan, although it can also charge per minute of audio. “We are one of the first in this very new market,” he said, noting that alternatives are crowdsourced notation services like Crowdflower, and speech-recognition tools developed by the likes of YouTube. Voice Magix has launched an API and is looking for its first investment.

What are the issues around publishing rights? “We don’t store any of the content. We process it then we delete it from our server,” he said. A question also asked how big this problem really is: most karaoke services only use a relatively small catalogue of music. “We are asking ourselves this problem too: there are hits that everybody wants to sing. But every day there are a couple of hundred new songs from Indonesia, from Japan, and that opens new markets. So we are focused on supporting different languages.” 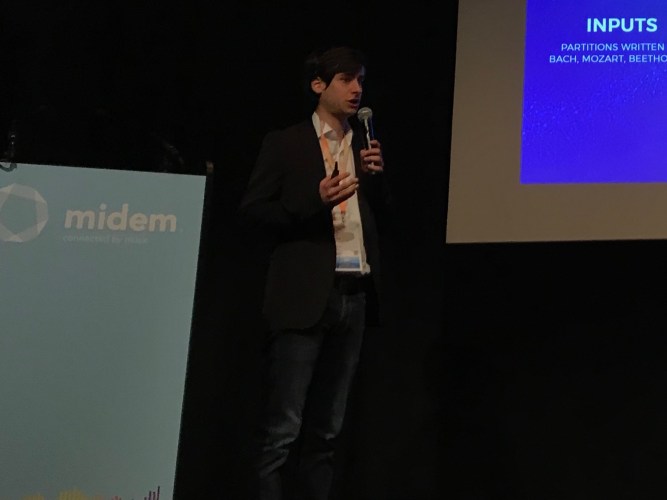 Aiva from Luxembourg was pitched by co-founder Vincent Barreau, who explained his company’s appeal to games developers: which often have up to 100 hours of gameplay, yet no more than two hours of music. AIVA is trying to solve this with artificial intelligence: a deep neural network capable of composing music: learning from scores written by Bach, Mozart, Beethoven and other composers, and then outputting original pieces. “We also have a plagiarism algorithm, so we are not plagiarising!” he stressed.

Aiva has worked on pilot projects, for example with Nvidia. Barreau talked about the competition around the sync market: companies can use production-music libraries, commission a soundtrack composer, or turn to AI startups like Aiva, Jukedeck and Amper Music. Aiva’s business model, at the end of this year, will start at €50 a month for non-commercial use by individuals and students; and €100 per month for commercial use.

He painted a picture of a future where Aiva can also live on people’s smartphones, composing personalised music based on their location, the weather and their activities. He talked about Aiva’s ability to compose in any style, but said the company differs from rivals in its decision to train the AI on classical tracks, rather than modern hits. “We are doing it from the beginning: classical symphonic music. It’s like attending a class. If you know classical music, you can do some jazz and you can do some pop… I like pop music, but the composition behind it is not as complex.”

A question focused on the accidental-plagiarism issue. “Aiva has learned from public-domain, so there’s no problem about that. But we do have that plagiarism algorithm. Every time Aiva is composing a new track, this track is analysed by the algorithm, which is checking it’s not a copy of any existing music. So it’s totally original, that’s for sure.”

Games are a key focus for Aiva: it sees lots of opportunity in a technology to generate music on the fly for whatever’s happening in a game – for example a fight. How big is the potential market? “We calculated an opportunity of a €6bn market, and of course we want to address it!” said Barreau. 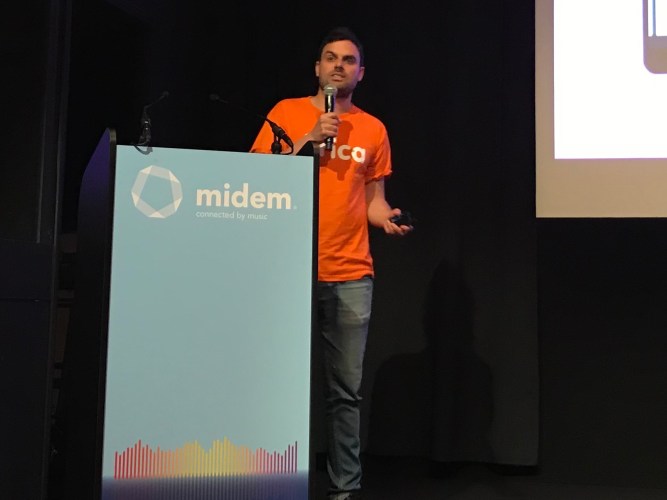 Taplyrica from the UK was pitched by CEO Paul Custance. “We’re a mobile app that teaches languages through the power of music,” he said, citing nursery rhymes as an inspiration: songs designed to teach children language. “Music is a great tool for memory retention: the fact that you have lyrics stuck in your head for days isn’t accidental… neuroscientists have proved that words heard to a melody are more easily remembered than words spoken.”

Sony Music has made a strategic investment in the company, giving it access to music by artists including Shakira. People can watch music videos with translated lyrics, they can take lessons based on those lyrics, and they can play mini-games to build their knowledge. “Around 40% of people have used it for more than 30 minutes, and 20% for more than an hour,” he said, of tests that Taplyrica has been running.

This month, Taplyrica will launch in the app stores, with a focus on Spanish initially, and a catalogue of 50 songs. “By the end of the year, we’re going to have released in new languages and new markets,” he said. “Educational institutions see real potential in what we’re doing… We’ve tested at some of the most prestigious universities in London, and we feel that we can do something that could really transform the music industry. We’re entering a market that could be worth $8bn by 2020, and currently no one in the industry is making a dollar… And we can provide a platform that can break artists internationally.”

Taplyrica is raising a seed round over the next couple of months, added Custance, who says that the company is planning to develop adaptive technology so that its app can understand the progress and knowledge of each user, and serve them the right level of questions accordingly. “We can adapt what we’ve created for the European languages very easily,” he added: so French, German and Italian could be on the agenda soon, alongside Spanish.

Is there a risk that general language-learning apps like Duolingo and Babbel could add music, and thus squash Taplyrica? “A big piece is licensing… so for them to convert to something where they had to pay licensing costs would be a big move for them,” said Custance. “Also we see ourselves as complimentary, at least at the start, to these other apps.”

Taplyrica will offer 10 songs for free, then in July or August it will launch a subscription – £3.99 or £4.99 a month initially – unlocking more songs, with the price rising as the catalogue grows to 50 songs, with a deeper stable of lessons. The songs are embedded in the app itself: Custance stressed that Taplyrica isn’t using embedded YouTube videos or music from other sources. 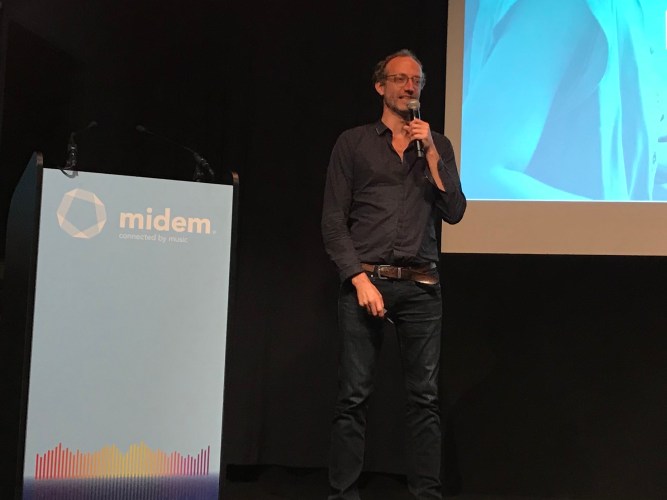 Skoove from Germany was pitched by CEO Florian Plenge. He cited data showing that 45% of people would like to learn a musical instrument, but that only 18% are actually doing it. “It’s super-hard to fit a lesson with a teacher into your daily schedule,” he said. And it’s pretty expensive: €750 is what you pay to a teacher a year. And the online options like YouTube are super-frustrating to use… We founded Skoove to change that.”

So Skoove is an app that teaches people to play the piano, guiding people through lessons based on a catalogue of songs in easy steps, with courses for beginner, intermediate and advanced players. “There’s no faster way to learn your first melody,” he promised. The app uses a multi-pitch validation algorithm that detects what the user is playing on their keyboard or piano, so it can

There are now 12,500 paying customers, from 500,000 downloads and 300,000 registrations so far, with subscriptions growing well according to Plenge. 85% of those subscriptions are annual for around €60 – with 50% of them renewing. And the company has good partnerships: every keyboard that Amazon sells comes with a trial voucher for Skoove, while Apple has also supported the app in its App Store. Licensing deals are in place with rightsholders, including Universal and Bosworth. The company has raised €2.5m but is looking to raise more; add in support for guitar learning; and grow ultimately to one million paying subscribers, he added.

How will it do that? “We expect to get there in the next four years, and our planning expects around €10m over two more [funding] rounds,” said Plenge, in terms of the resources required. “Our customer lifetime value minus the licensing fees and the store fees is around €70 per user.” The judges asked what other marketing bundles are possible. “We’d like to bundle a new album with some form of access to the platform. But there are also other products that could be bundled,” said Plenge.

Is there a way to make money from all those people who use Skoove but aren’t paying a subscription? “Yes, there are other ways to monetise. We have accessories that we could sell: for example we could sell sheet music. We could tie in with a learning community of teachers and recommend them to people. We could sell instruments… We’re not getting a kickback yet on that, but that’s something we could do as soon as we have a larger amount of traffic that we’re sending in that direction.” 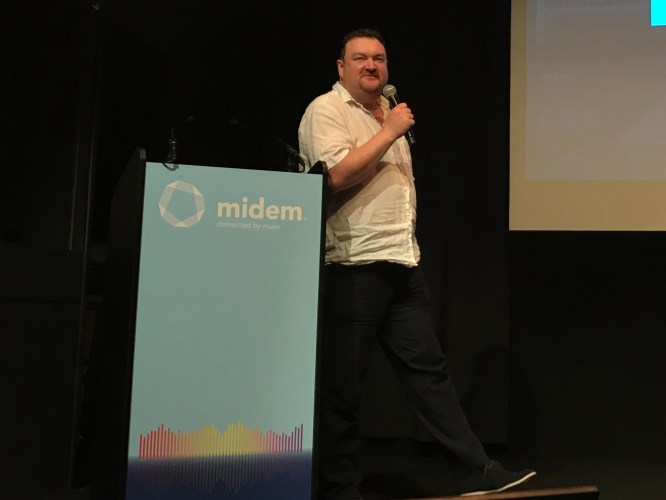 MXX from the UK was the final pitch, with CEO Joe Lyske. “I’ve invented an artificially-intelligent music editor. It doesn’t need the stems, it works on the actual stereo file itself,” he explained. “AI is here to do two things: it’s going to replace us or it’s going to empower us. I’m going for the second!”

The company’s current product is for anyone trying to put music on video: not just film, TV and advertising editors, but professional YouTube creators too. They use MXX’s tool to specify when their introduction is; when they want to build tension or have a climax; or even to have the music drop out entirely. They then use MXX’s search tool to find music, which then automatically edits the track to those intensity settings.

Agencies including BBH, J. Walter Thompson and Mother have been trialling the tool and giving feedback, while music sources include BMG, Warner Music Group, EMI Production Music and Epidemic Sound, said Lyske. “The reason why we’re using catalogues and libraries at the moment is they have the rights to do derivative works and sync deals,” he added. It’s more complex working with labels, so for now, production-music catalogues are the focus. For YouTubers, MXX is creating a store for songs, so that creators can license the songs through its tool – and it then gets a cut of the licensing fee.

So far, MXX has raised seed funding and an additional round since – £1m so far, and it is halfway through another round to top it up to the end of 2018. “We’re launching in a month’s time,” he said. “We want to be able to roll out to the YouTube channels, of which there are around 2m. And [then] a gaming SDK that we’re discussing with some of our suppliers. There’s one and a half million games made every year just for mobile…” So in that sense, it’s a competitor for Aiva, but with music from commercial libraries, rather than using AI to compose new music itself.

Will physical industry conferences be a thing this year? As more events get cancelled or pushed back, it’s looking like 2021 may be another year of online panels and networking. Midem organiser Reed Midem has announced...
© Copyright Music Ally All rights reserved 2021 - Website designed and maintained by