20 music/tech startups are finalists in this year’s Midemlab contest at the Midem conference in Cannes. This morning’s second session saw the music discovery and distribution startups showing off their products and platforms.

Laylo from the US was presented by CEO Alec Ellin (pictured above), who started off by creating a music blog called TLBL, which then landed him a job at Sony Music’s A&R department, where he was introduced to the concept of the ‘superfan’ – who account for 75% of music-industry revenues.

“The industry spends $5bn a year on A&R and marketing, but only two out of 10 artists they sign ever break even,” said Ellin. How will Laylo help in this? “We’ve gamified music discovery,” he explained. It’s an app where people follow their friends and celebrities, and get a feed of the music that those people are playing – from a catalogue of more than 30m songs.

Every song has a page showing who found it first and how it spread among the fan’s network, with leaderboards and a points system to see who’s best in a group of friends at discovering and sharing music. “If your best friend’s on Spotify and you’re on Apple Music, you can send them that music and talk about it.. and you don’t have to worry that you’re on different platforms. And anywhere you can spread a link, you can share this music.”

How does it make money? It sells ‘superfan experiences’ like exclusive merch and backstage access. But there’s also a B2B model to work with labels, publishers and artists, to give them access to Laylo’s data: both to understand their own superfans, and to spot artists and tracks that are bubbling up.

There are already artists breaking on the platform: one called Bazzi had 5,900 followers in November, and now he has 368,000, for example. Fader, LiveXLive and Slacker Radio are among Laylo’s advisers, too. The app launched six months ago, and is invitation-only with 3,000 users. It’s working with social influencers in its early stages, and will be building an audience based from them.

One question focused on how the superfan rewards are sourced. “We want to make it an open system: if you’re a publisher and want to reward the best fans… if you’re a ticketer. We want to give them the opportunity, we don’t want to decide what those rewards are.” 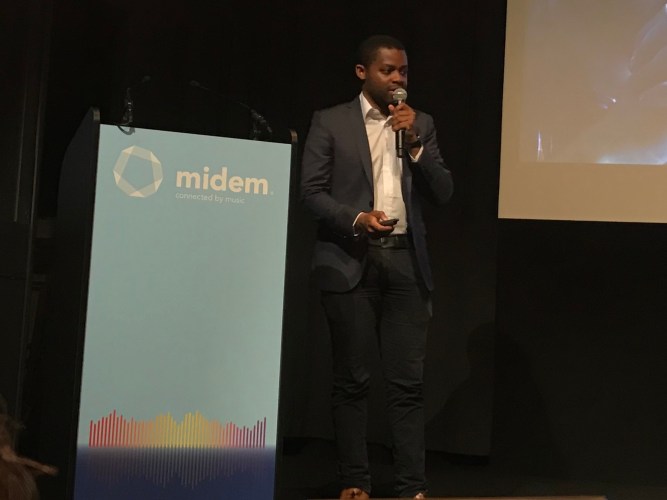 Listen! from France was pitched by CEO Gontran Mabetomoka. His company is trying to provide a centralised interface for music across all the various streaming audio and video services. “You can share this content on your social networks, and now we are working on the mobile app, which is an infinite stream of different kinds of music content,” he said. “The user can find everything about music: tracks, video, pictures, even concert tickets. He can save it in his library, he can share it on his social networks.”

The startup is using machine-learning technology to power its recommendations for each user, based on their activity within the app. The business model is partly selling advertising, partly sponsored content, and partly metadata-aggregation (and charging the industry to access it). Listen! currently has more than 18,000 active users, and it hopes to reach one million by 2020. The mobile app will be out in September.

“We have to put forwards technology for users with the least effort possible. In our app users only have to do three actions: save content, share content, and navigate on content,” he added. “The most work is done by the technology: the machine-learning algorithm.”

But why would this curation be better than what already exists, for example on streaming services, asked a judge. “Our project is based on  existing content from different platforms: YouTube, Spotify, Twitter. We put forward a new way to listen, to read content. It’s not the same service as Facebook or YouTube. It’s a new way to have the least effort possible to find the good content at the good moment,” he claimed. 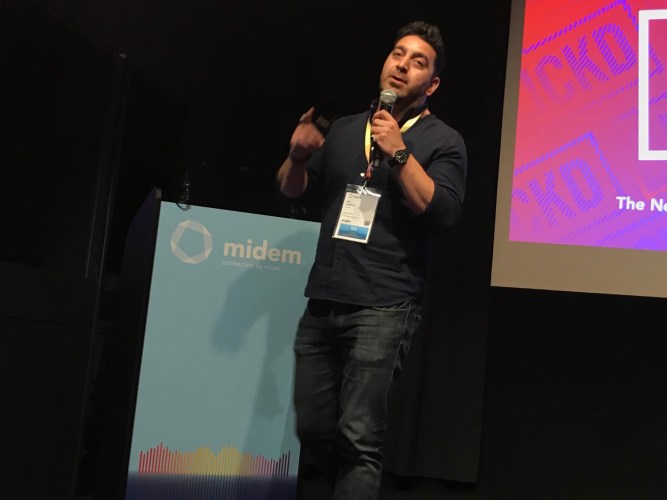 Lickd from the UK was presented by CEO Paul Sampson. It’s a pre-cleared, claims-free licensing service for social-video creators: mainly YouTubers, to license music to use as the soundtrack for their videos. “Generation Z and millennials almost exclusively consume their content online,” he noted. “And we don’t have a platform to license in to it.” He sees Lickd as a way to take sync-licensing into the business-to-consumer world. “2.8bn of us have a production company in our pocket, and the world’s most generous commissioner, in YouTube,” as he put it.

Video creators can search by artist, genre and theme, and then pay to license tracks, with a sliding scale of fees depending on the size of their channel’s audience. And Lickd integrates with YouTube’s Content ID system so that their videos don’t then get flagged for copyright infringement. Sampson noted that there are currently more than two million channels that are making money from their content – that’s the addressable market that he thinks music is missing out of.

In the future, this won’t just be about YouTube. “Welcome to the game Facebook, Instagram and Snapchat. Lickd’s role is to futureproof the music industry for social-video licensing,” he said. Lickd also sees potential to help labels get their emerging artists and tracks into the videos of online influencers: and provide them with data via an analytics dashboard back on what kind of audiences are watching those videos.

75 labels, publishers and distributors are on board, and the company is “at contract with three of the four biggest labels in the world… and I should be able to announce them in the next month.. One of the deals I can’t speak about is upwards of a quarter of a million songs on the master-recordings front, with publishing attached.”

Across the catalogues, Lickd will take around 40% of the revenues, and pay 60% back to rightsholders: it’s a “blended target” because the rev-share may vary: for example, for unsigned artists versus major acts. Lickd has raised a seed round of funding, and is now in the middle of a Series A – “we’d like to raise a significant amount of money” – which it will partly use on an influencer-marketing strategy, as well as building out its relationships with and tools for multi-channel networks. 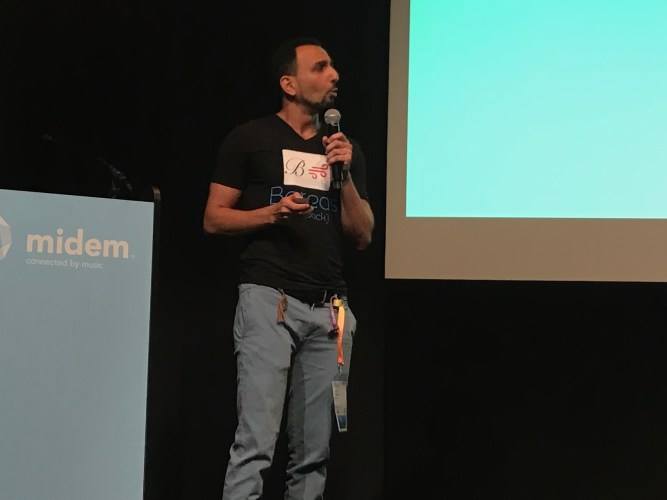 Boreas from the US was pitched by CEO Bassam Almogahed. He talked about the “musician’s dilemma” of trying to build an audience, and its platform that gives “every musician an immediate audience and stage, for free”. It uses an algorithm to understand how “fit and strong” each musician’s performance is compared to those in their locality, and if they rank highly, they spread – a music-discovery version on the process of natural selection.

The app provides musicians with visual feedback on how their music is performing and spreading. “They can find their audience. They can actually track how their music is progressing from day one until the current day,” he said. Meanwhile, from the perspective of a listener using the app: they discover new artists, and act as nodes in the spread of their music, without having to take too much effort.

The platform itself is free: musicians get one “projection” at a time, but they can use in-app purchases to do more, or to get a wider reach on the audience that encounters their music. At the basic level, musicians’ ‘projections’ go to people within 500m to 1km in the real world. “You can come across three talented people on your way from work!” said Almogahed. 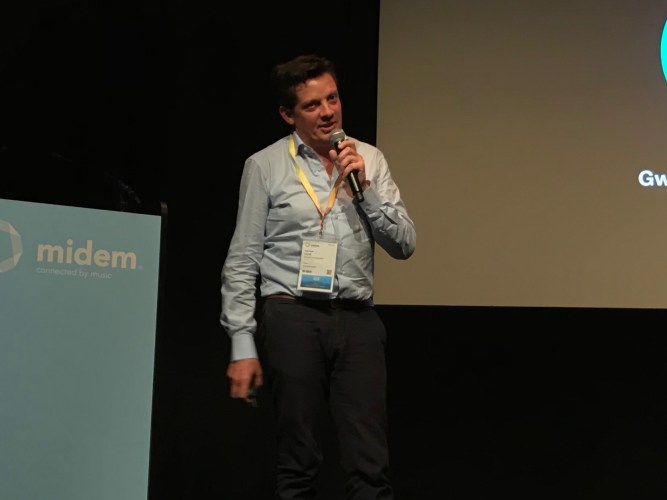 Louise from France was pitched by CEO Gwenhael Louise. He told the tale of travelling on the tube in London, watching people listen to music on their headphones. He decided to create an application around listening to music live with friends while text-chatting, pulling in tracks from SoundCloud, YouTube and Spotify. Its app also offers a weekly music magazine, with content sponsored by brands.

For now, Louise is available in France, Belgium and Switzerland. “We have 1,500 users per day in one week in these countries,” he said. “The last week was great for us!” The judges asked why this would be better than simply sharing a playlist from an existing music application. “We add also the networks links. You want to share your music with many social networks? WhatsApp, Messenger, Snap, Instagram… It’s really good!”

This year's Midem Digital Edition conference is underway online, and yesterday it included the announcement of the winners of the 2021 Midemlab startups contest.
Read More