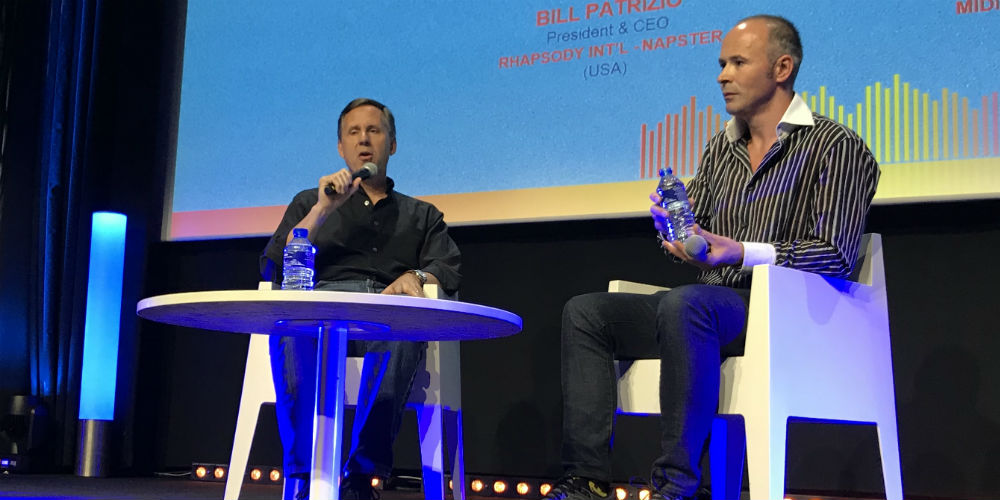 Spotify, Apple Music, Amazon and YouTube may hog many of the streaming headlines, but Rhapsody International / Napster is still going as a global streaming service too.

Its president and CEO Bill Patrizio outlined the company’s strategy, in a keynote session at the Midem conference today. He was interviewed by Midia Research MD Mark Mulligan, who asked about some of the dynamics of the global streaming markets as an opener.

“Today, there are about 175 million paying subscribers to music-streaming services. The expectation is that this growth is going to continue well into the future… With that growth is going to come a great deal of diversification: of product, of consumer experience, new technologies bringing consumers new ways to engage with the artists,” he said.

Napster currently has three million artists on its platform, more than 50m tracks, and it adds around 24,000 new music tracks a day. On average, its users listen to 30 hours of music a month, and they have created more than 200m playlists. “In 2017 the platform delivered over 500 million hours of music to subscribers around the world,” said Patrizio.

He said the second prong of Napster’s strategy is running streaming services for other brands and businesses. “We think that’s an important area of growth for our business, and how we’ll continue to compete and be successful in the future.”

But how does that help it survive in a world of Spotify, Apple Music and Amazon? “The market will still be dominated 80% we believe by those dominant players: Spotify, Apple… We expect it’s going to be a market size of about $7bn, moving towards potentially $20bn or $25bn… and that increasingly leaves opportunity for other players to participate. Even a 20% slice of a $20bn market is a $4bn market… and that’s what we’re going to focus on… This is not going to be about just bringing to market the $9.99 product that we have today. This is going to be about innovation, about new forms of experience.”

Mulligan asked where that differentiation will come from. “We think that today’s experience, the subscriptions that we’re all familiar with, represent incredible value to consumers,” said Patrizio. But over time, services will be looking to make more compelling, personalised experiences that will provide opportunities to increase revenue, he predicted. “Higher premium products will come to market, that will be relevant to segments of the market… but in the maturing of this industry, which is really only now in its infancy. 175 million [subscribers] is only in its infancy… and like any other consumer good, it will evolve and segment.”

“Pricing is one lever to pull,” he continued. “But there are other levers to pull.” For example 5G mobile technology. “It’s going to bring to a music subscription service a completely new range of capabilities, of experiences, that can be monetised,” predicted Patrizio.

He admitted that a Napster can’t compete “toe-to-toe” with Spotify, so for his company to remain sustainable “we need to do sensible thing: frontal competition with Spotify in consumer-direct is not our final game.” But helping other kinds of businesses participate in the streaming market will be key to its future.

What does Napster look like in five years from now? “It’s back to the theme of segmentation,” said Patrizio. “We know there are very passionate, discrete groups of listeners who feel under-served… And the labels are concerned about the monetisation of their back catalogues, because the streaming services skew very heavily to pop and hip-hop… The catalogue is dwindling in its ability to be monetised, and that creates opportunities.”

He also talked about where the next 100 million streaming subscribers will come from: highly curated and personalised experiences in emerging markets, with careful attention to localisation and pricing. “The trick is to be agile and flexible with regard to rights,” he warned: so that pricing can be matched to the economic environment of the country.

Napster is also on the lookout for other companies, inclduing startups “Startups, acquihires, JVs, partnerships: a very important part of how we’re going to develop our business,” he said.

What about technology like cryptocurrencies and virtual reality? “Blockchain, Ethereum, not a new issue for the music industry: particularly around connecting artists and royalties… utilising smart contracts and blockchain and cryptocurrency to simplify that is something we’re participating with some of our peers in the industry,” he said, before adding that he doesn’t have a timeline to share on how soon that might be integrated into mainstream streaming services.

Forget loafing about on the sofa munching turkey leftovers: MelodyVR spent the days between Christmas and New Year completing its acquisition of Napster. After issuing additional shares in MelodyVR to Napster’s owners,...
Read More

MelodyVR reveals next steps in its merger with Napster

Music VR service MelodyVR’s plans to merge with streaming service Napster continue: they have been detailed in a public filing this morning in the UK. They include a new shares issue: 201.3m subscription shares at...
© Copyright Music Ally All rights reserved 2021 - Website designed and maintained by