Spotify has just published its financial results for the second quarter of 2018. The music-streaming service ended June with 180 million monthly active users, including 83 million subscribers. 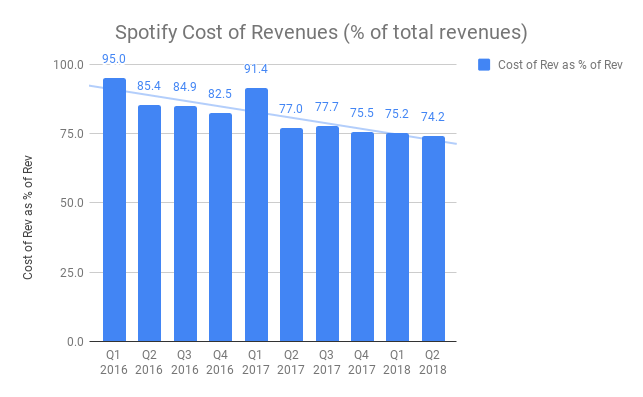 Here are some of the other key figures from the latest financial results, starting with the breakdown of listeners between paid and free (ad-supported). 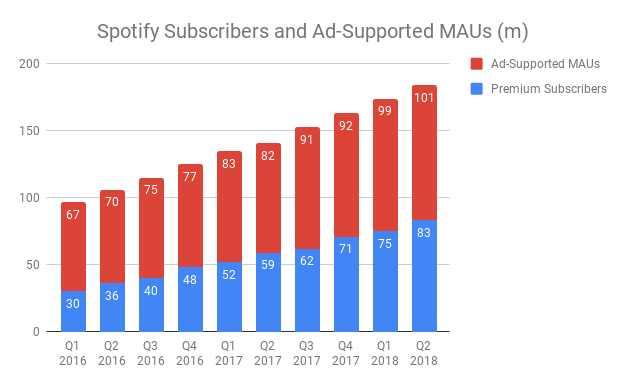 Spotify saw its free listeners grow by 23.2% year-on-year to 101 million. Overall “growth in our emerging regions of Latin America and Rest of World continues to outpace growth in our more established markets” reported the company. 37% of Spotify’s overall listeners are in Europe, 31% in North America, 21% in Latin America and 11% in the rest of the world.

Meanwhile, 31% of its subscribers are in North America: around 25.7 million people. Compare that to the recent claim by the Financial Times that in early July, Spotify had “22m to 22.5m” subscribers in the US specifically (although remember: Canada isn’t included in the latter stat, but is in Spotify’s figures.)

In a call with journalists following the results, CFO Barry McCarthy said that Spotify’s recent revamp of its free tier on mobile is having the impact the company expected.

“We’re seeing more engagement as a result. We continue to see growth we were expecting in the business for free both in the US and outside the US,” he said. “The recurring theme for this quarter, like last quarter, is growth as expected. Kinda: steady as you go.”

Meanwhile, on the 40.7% growth in premium subscribers to 83 million, Spotify said that “our mid-year campaign performed well and was a significant portion of our subscriber intake in the quarter. Family Plan continues to be a primary driver of gross adds and lower churn due to strong retention”

This means that Spotify’s conversion rate – the percentage of its listeners who are subscribers – stood at 45.1% in Q2 this year. That compares to 41.8% a year ago, and just under 34% a year before that. 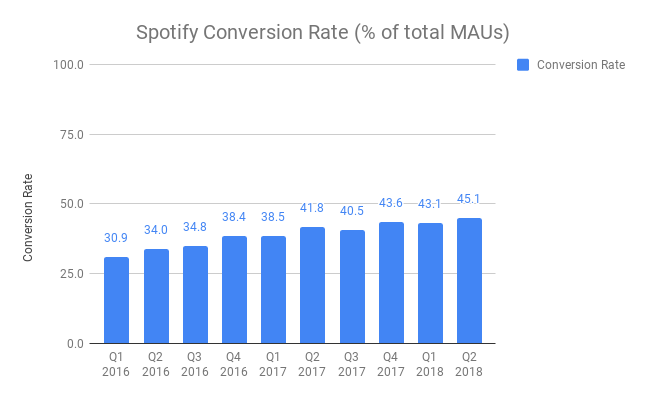 45.1% of Spotify’s listeners are premium subscribers, but they accounted for 90.3% of the company’s revenues in this year’s Q2, compared to 82.2% a year ago.

“Average revenue per user (“ARPU”) was €4.89 in Q2, down 12% Y/Y and up 4% Q/Q. The increase from Q1 is largely due to the timing of our bi-annual campaigns which create a seasonal impact to both revenue and gross margin. We expect this seasonality to continue,” reported Spotify.

“Growth in Family and Student plans continues to weigh on ARPU, as does the shift in market mix as we grow faster in relatively lower ARPU geographies like Latin America, Southeast Asia, and other newly launched markets. Changes in foreign exchange rates also contributed to the Y/Y decline in ARPU. Excluding the impact of foreign exchange rates, ARPU would have been down 6% Y/Y.”

Spotify has also talked about its issues with “users that may have employed methods to limit or otherwise avoid being served advertisements” on its free tier: it estimates that they “constitute less than 5% of our total reported Ad-Supported MAU figure (less than 3% of Total MAUs)”.

The company also said that “separately, we continue to work to identify and remove users from our reported metrics that we consider to be ‘fake’ users based on various criteria. This includes, but is not limited to, bots and other users who aim to manipulate stream counts for purposes of royalty calculations”.

Notes of interest from Spotify’s earnings call with analysts can be found in this separate article.

Earlier this year, Spotify's chief content and advertising business officer Dawn Ostroff said that nearly 370,000 artists had featured tickets or merch on their profiles, and promised that "looking ahead we’re going to...
© Copyright Music Ally All rights reserved 2021 - Website designed and maintained by