Spotify could overtake Pandora in the US by 2022; but is a ceiling being hit?

The latest forecast from eMarketer claims that a sharp growth in adoption of Spotify and a slowdown in the adoption of Pandora will see the former overtake the latter in the US within the next five years. The research company suggests that Pandora will have 75.9m users this year compared to 58.4m for Spotify (split between free and subscribers). Over the coming years, Pandora’s numbers will be shaved slightly, ending up with 75.3m by 2022. Spotify, meanwhile, will grow its userbase by around 10% each year for the next few years, but this will slow down to closer to 3-4% growth in 2021 and 2022 by which point it will just nose past Pandora with 76.7m users.

There are some tricky semantics here as eMarketer calls Pandora “the most popular music streaming service in the US”, but YouTube would surely raise its hand at this point. Calling it the “biggest audio music streaming service” or the “biggest audio-only music streaming service” might be more apposite. Neither does it mention Apple Music, which several sources are saying has now overtaken Spotify in terms of paid users in the US. Equally there is no mention of Amazon or its pincer movement into the mainstream with Amazon Prime Music and Amazon Music Unlimited. This is presented by eMarketer as a two-horse race so there are some blind spots that need to be addressed. 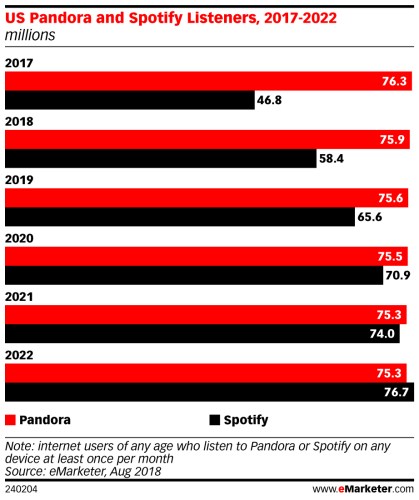 While the headlines of the research are all about how Spotify will start to leave Pandora choking on its dust in the next five years, there is a lot more to unpack here. Firstly, eMarketer is saying that Pandora will go from 76.3m users in 2017 to 75.3m in 2022. So even with increased competition from Spotify (not to mention Apple Music and Amazon), Pandora will only suffer a 1.3% slip in its userbase over a six-year period (which is no mean feat). Secondly, as we noted above, the forecast is that Spotify’s rocketing growth rate will start to cool down around 2021. As they are very different user propositions (one on-demand and the other radio-like for the most part, although it does have a premium on-demand tier now), it would appear that Spotify (and Apple and Amazon) is pulling the brakes on Pandora’s growth – but it is not totally cannibalising its userbase. So the fact that Pandora is effectively going to hold firm while newer services all continue to grow around it is surely good news for the entire music industry. It suggests a large and diverse digital music landscape is becoming a reality.

But this all begs the wider question about where the digital ceiling is in the US and if we have already started to bump up against it. With a population of 326m, Pandora is already reaching a third of the country (and that’s not even discounting the young children and older consumers who are not going to be listeners); but it appears to be reaching saturation point. Based on these eMarketer numbers, once Spotify crosses the 70m mark, it seems to hit a pain barrier and its annual growth significantly slows.

There will be consumers who use multiple services, of course, but perhaps the industry has to wake up to the fact that, given the current makeup of the streaming business, 75m could be the largest number of people that a single music-only service (note that earlier point about YouTube) could reach in the US before slowing to a crawl. And if that is going to happen in the next five years, this could present an existential crisis that everyone in the sector is going to have to start facing down. Unless, of course, Apple, Amazon or YouTube buys Spotify. Then all bets are off.

Good news for cats, dogs, hamsters, birds and iguanas this morning, but less so for stick insects, micro pigs and goats. Spotify’s latest algorithmically-generated playlist is aimed at pets, but only those in the first...
Read More

Spotify’s launch in India last year was marred by a licensing dispute with Warner Chappell, in which Spotify argued that it could use a statutory licence designed for broadcasters to cover its use of the publisher’s...
© Copyright Music Ally All rights reserved 2020 - Website designed and maintained by