Napster revenues down, but unlike music-streaming rivals it’s profitable

Music-streaming service Napster is on track to record a net profit in 2018, despite its revenues having dropped by nearly 28% since the company’s peak in 2016.

Napster recorded net profits of $4.4m and $2.1m respectively in the first two quarters of this year, although its $76.5m revenues for the first half of 2018 compare to $106m in the comparable period in 2016.

This is based on Music Ally’s analysis of figures provided by technology firm RealNetworks in its own quarterly and annual financial results.

RealNetworks owns a 42% stake in Rhapsody International Inc, having launched Rhapsody as a joint venture with MTV Networks in 2007, before spinning it off as an independent company in 2010.

Rhapsody bought Napster in 2011 from its previous owner, US retailer Best Buy, operating it outside the US while retaining the Rhapsody brand in the US – until 2016, when the latter was rebranded as Napster.

RealNetworks publishes quarterly financial metrics for the streaming service, as a result of its stake: revenues and profit/loss figures, although not any metrics for Napster’s subscribers. 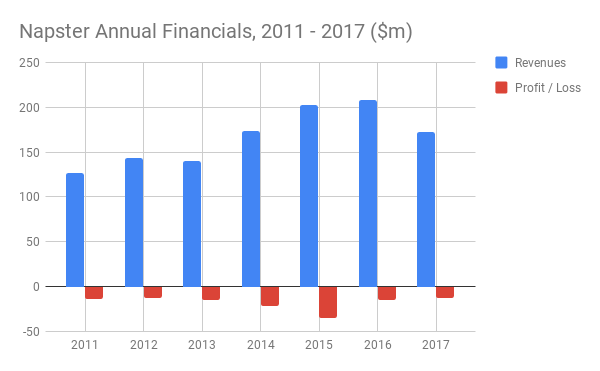 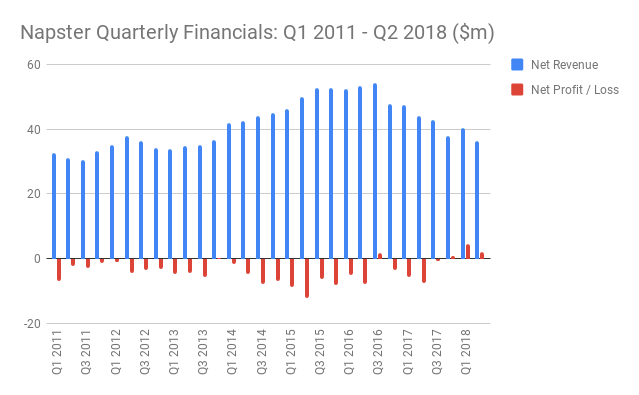 Napster’s peak quarter for revenues was Q3 2016 with $54.3m, shortly after the company confirmed a round of layoffs and plans to close Rhapsody’s San Francisco office “to better position Rhapsody/Napster for long-term profitability and accelerated growth in a competitive global market”.

In May 2017, the company announced another round of layoffs, as its CEO Mike Davis stepped down, to be replaced by RealNetworks exec Bill Patrizio – initially as interim CEO, before he dropped the ‘interim’ aspect in February 2018.

Under Patrizio, Napster has now recorded three straight quarters of net profits: Q4 2017, Q1 2018 and Q2 2018. At the Midem conference in June, he outlined Napster’s strategy to continue competing in the global music-streaming market, finding a niche (including white-label streaming for other brands) to co-exist with the giants of the space. 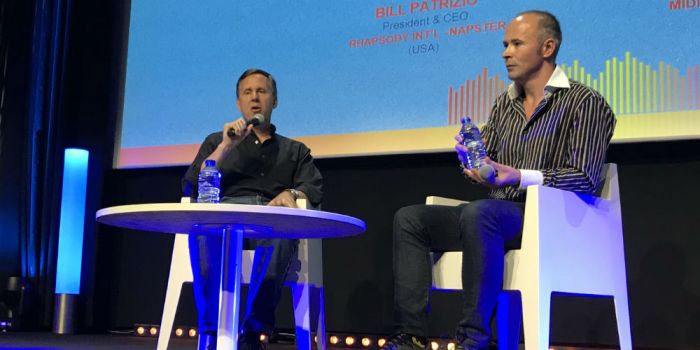 “Today, there are about 175 million paying subscribers to music-streaming services. The expectation is that this growth is going to continue well into the future… With that growth is going to come a great deal of diversification: of product, of consumer experience, new technologies bringing consumers new ways to engage with the artists,” said Patrizio.

“The market will still be dominated 80% we believe by those dominant players: Spotify, Apple… We expect it’s going to be a market size of about $7bn, moving towards potentially $20bn or $25bn… and that increasingly leaves opportunity for other players to participate.”

“Even a 20% slice of a $20bn market is a $4bn market… and that’s what we’re going to focus on… This is not going to be about just bringing to market the $9.99 product that we have today. This is going to be about innovation, about new forms of experience.”

Patrizio admitted that “frontal competition with Spotify in consumer-direct is not our final game”, and the figures bear him out. In Q2 2018, for example, Napster’s $36.2m of revenues paled next to Spotify’s $1.49bn.

French collecting society Sacem has published its financial results for 2021, with collections growing by 7% to €1.06bn (around $1.12bn).
Read More

Canadian collecting society SOCAN has published its latest financial results, revealing that its collections grew by 6% in 2021 to $416m.