We’re used to thinking about YouTube as the dominant online-video platform, and it is… for pre-recorded videos. But for livestreams, Amazon’s Twitch subsidiary remains top dog. At least, this is the verdict of a report published by StreamElements, a company that provides moneymaking and community tools for streamers.

“During Q3, Twitch saw over 2.5 Billion hours watched, which was 127 million more hours than Q2 and a 408 million hour increase over January,” claimed its report. “That said, YouTube Live bounced back in a big way from its lowest point in March (with fewer than 100 million hours viewed total for the month), to more than 226 million hours viewed in September – close to 25% of Twitch’s viewership (up from 15% in March).”

The report also suggests that Twitch’s growth is coming from its ‘long tail’ – channels outside its top 100 – as well as scotching assumptions that Twitch is mainly about people watching esports: “Esports represent only around 9–17% of total hours viewed on Twitch (largely averaging out at 10% through the year)”. One final stat: fans of the game Fortnite watched people playing it on Twitch for 389.1m hours in the third quarter of this year.

Check your watches! We appear to have reached the traditional ‘op-ed in Billboard’ stage of the NMPA’s licensing battle with Twitch. In it, David Israelite takes aim at the livestreaming service’s...
Read More

Amid growing unrest from Twitch’s creator community about music-related DMCA takedowns – not to mention the unrest among music rightsholders that has spurred that barrage – Amazon’s live video service has addressed...
Read More 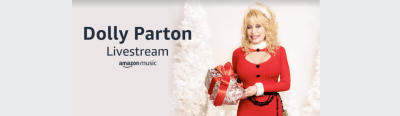 If you're the kind of person who shouts at people who put their Christmas decorations too early, look away now. Dolly Parton is doing a Christmas-themed livestream for Amazon Music... on 13 November. 'Dolly Parton's Comin'...
© Copyright Music Ally All rights reserved 2020 - Website designed and maintained by