“The first time I’ve touched this safe-harbour [topic] in quite some time is this morning with you! I don’t hear it,” YouTube Music’s Lyor Cohen told Music Ally in June, after we asked him about the ongoing tensions between the music industry and YouTube over the ‘value gap’. “Anybody who is thinking about that is stuck on a whole different era. You know what? I’ve been here now for a year and four months, and probably the first six to eight months, I heard only that. I haven’t heard that at all [since]. I’m not hearing that at all.”

Five months on, though, and the industry is actually hearing a lot about this topic… from Lyor Cohen. Or to be specific, he’s come to the forefront of YouTube’s lobbying efforts against the Article 13 element of the proposed new European copyright directive. His latest letter to the industry focuses squarely on Article 13, taking the same ‘unintended consequences’ like as YouTube CEO Susan Wojcicki’s recent comments on the legislation.

“The music industry will make less money from YouTube, not more. Emerging artists will find it harder to be discovered and heard on a global stage. In short, the Parliament’s version of Article 13 will harm the very creative industry it seeks to protect,” wrote Cohen yesterday, noting that “we’ve paid the music industry over €5 billion to date from ads alone and over €1.5 billion in the last 12 months also from advertising revenue”.

(That last figure being a euros conversion of the $1.8bn number set out by Wojcicki – a number that the IFPI has challenged by comparing it to the industry body’s own estimate of $856m of video-streaming payments for 2017, but which YouTube has defended while noting its stat includes royalties paid to collecting societies as well as direct payouts to music partners. This isn’t quite apples and oranges, but in timescale – calendar year 2017 versus a Sep-17 to Oct-18 12-month period – and in the identity of payees – record labels versus labels, societies and direct partners – the comparison isn’t direct.)

Cohen had a challenge on that front. “There is a lack of transparency between the money YouTube pays to labels and the money artists see in their pocket. To fix this, we commit to disclosing revenue earned on YouTube to artists and songwriters directly IF their labels and publishers waive their contractual prohibitions that prevent us from doing this,” he wrote. “We welcome more transparency so we can put to rest false accusation from the IFPI and others about our payments.” That would certainly be disruptive, yet it also feels like a challenge made knowing that the answer will be negative.

It’s nevertheless clear that YouTube is willing to fight this fight ever-more publicly and and firmly, with Cohen’s claim that “YouTube supports copyright reform, and a well-balanced Article 13” accompanied by the uncoded warning that “Dua Lipa, Alan Walker and Ed Sheeran all grew their careers on YouTube. Under Parliament’s version of Article 13, tomorrow’s generation of European artists might never see the light of day, their videos blocked at scale to avoid copyright liability”.

There are other levers to pull. Cohen flagged up the ambitious rollout of YouTube’s subscription service – “we pay the same rates as Spotify for this growing subscription service. Period,” he wrote, in another response to the IFPI’s comparison of YouTube’s per-user ad-supported payouts to Spotify’s – in his post. But according to The Verge, for some users in Europe at least, YouTube has replaced its pop-up ads for its premium tier with an ad inviting them to ‘learn more about Article 13’. Or rather, to learn more about why it’s flawed, in the company’s view.

As we’ve said before: anyone thinking the recent European Parliament vote in favour of Article 13 was the end of the safe-harbour battle in Europe should now be well aware that it was most certainly not. 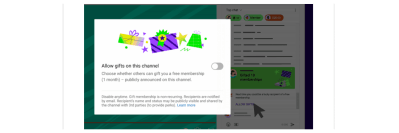 YouTube said last year that it was planning to launch Twitch-style channel membership gifting, where flush-with-cash viewers can buy channel subscriptions for their fellow fans.