In April this year, Music Ally stumbled upon an intriguing music startup called Big Neon, through its profile on an investment website.

Given their experience – and backing from well-known Silicon Valley investors like Redpoint Ventures and Trinity Ventures – its promise of a “highly scalable, mobile-centric event ticketing platform” using blockchain technology “to improve the sale and resale of tickets” pricked up Music Ally’s ears.

In May, we learned more as Teree, Spagni and Jain revealed their plans for something bigger: Tari, which they described as “a new open source blockchain protocol being built specifically for digital assets”.

Not just a ticketing startup, then, but a fully-fledged blockchain-powered platform for developers to build apps and businesses on. The obvious comparison being Ethereum, which is used by a number of music-focused blockchain startups.

Now, in December, we can explain how these two stories fit together. Tari remains the platform, and Big Neon is the first thing to be built on top of it: a proof-of-concept, but also a standalone business that Teree and his colleagues hope can make a real impact in the ticketing sector.

The high-concept pitch from the launch press release: “Over the last five years, ticketing companies have been more interested in getting bigger than getting better. Big Neon aims to modernise ticketing by delivering the most powerful mobile tools and digitising the entire ticketing process.”

The company says it’s launching with ‘multi-year, multi-million dollar exclusive ticketing contracts’ with venues and promoters across the US, from 300-capacity venues to an 8,000-capacity ballroom.

Teree talked to Music Ally ahead of the launch to give more details, and explain what Big Neon is planning. His experience at Ticketfly – acquired by streaming service Pandora in 2015 then sold on to Eventbrite in 2017 – looms large.

“In the last five years, there has been a flow of private equity investment into three or four major, mid-market players. There’s just literally been a financing of consolidation. But whenever companies buy other companies, something has to give,” he said.

“There has to be a rationalisation of resources. You choose a platform that will be the lead dog, and the other platforms kind of get atrophied or neglected. And on top of that, you’ve also got the distraction of some of your best leaders getting involved in integration projects: doing things all over again without necessarily creating new features. It just crowds out innovation.” 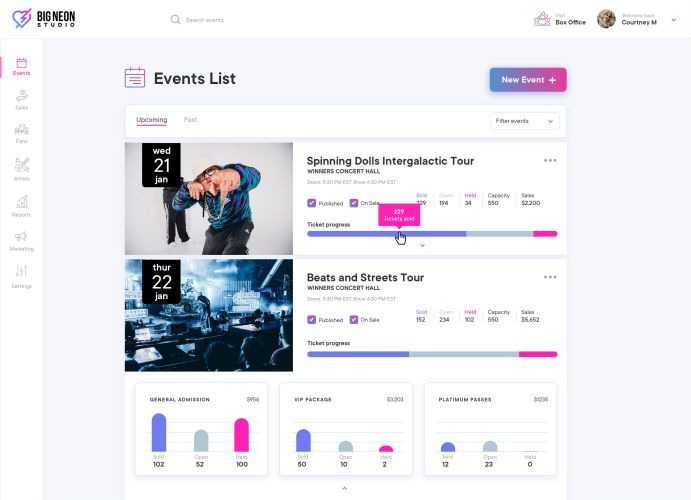 That’s part of the pitch Big Neon will be making to venues and promoters, as it seeks to tempt them away from – for example – Eventbrite/Ticketfly, or even Ticketmaster.

“We’re going to be extremely focused on independent music clubs and music venues, where we can really redefine the showgoing experience,” added Teree, adding that “we have signed [deals for] hundreds of thousands of tickets under exclusive contract”.

Mobile is key to this: he describes Big Neon as “mobile-only” both in the experience for clients, who’ll be able to manage their events and accounts from their smartphones, and for concertgoers.

In the latter case, Big Neon’s app will work in a similar way to those of airlines, with dynamic barcodes that are re-generated every 30 seconds, as part of the technology that aims to prevent unauthorised resale through secondary-ticketing platforms.

One important point about Big Neon: the entire platform will be open source, with the startup hoping that other ticketing companies across the world will use its codebase to improve their own platforms – less a threat than an opportunity for Teree and co, since that would boost Tari, the underlying protocol for all this.

He suggested that another benefit of the open-source approach is security. “I talk about it as our engineers coding on stage, to use an event analogy,” he said.

“Our coders are amazing, the most talented I’ve ever worked with, but also they’re coding knowing that other engineers around the world will look at the quality of their code. Open source projects will yield a more secure and higher-quality product… People try to hack the code, and in the process it gets battle-hard.”

There are lots of blockchain-ticketing startups around in 2018: in our report on the wider sector in April, we included Aventus, Blocktix, Citizen Ticket, Crypto.Tickets, EventChain, GUTS Tickets, HelloSugoi and Lava Movement. Since then we’ve also covered HelloTickets, True Tickets and Upgraded – the latter of which was acquired by Ticketmaster in October.

Teree is well aware of some of the hype around blockchain as a technology, but he stressed the real benefits he sees it bringing for ticketing.

“Each ticket will be issued with rules on it: literally on the bits and bytes on the blockchain, with the identity of the owner of that digital asset. Those rules have to be respected: which could be that the music promoter gets 20% of the transfer [resale] price, or it could be that you can’t resell the ticket at all: the person who bought the ticket and whose cellphone it’s identified with is the only person who’s going to get in to the show.”

The nature of the ticketing market means Big Neon will need patience. While it’s launching with a range of exclusive deals, many venues and promoters are tied up in agreements with existing ticketing firms that last for one or several more years.

In those cases, Teree said that Big Neon will make its pitch and build relationships with the ambition of persuading people to migrate over to the company’s platform when their existing deals elapse. He added that besides the slick pitch, there will be financial incentives to make the switch – a tried-and-tested strategy in the ticketing world.

“You shouldn’t minimise the power of ‘making clients more revenue’ though. Promotion is a touch business. With technology and our approach to help our independent clients make more money, they can put out bigger bids and compete against the likes of Live Nation and AEG from a stronger position,” said Teree.

Big Neon will also be trying to help different players in the live ecosystem work more effectively together: for example, agents and artist managers.

“Some of that will be blockchain-oriented: giving people more trust and visibility into the sell-through of an event – a shared truth. But also non-blockchain features, for example to better coordinate the marketing of shows between agents and managers and promoters,” he said.

“We want to help align people, often by leveraging technology in easy ways. Email lists and sharing of consumer data being one example. Managers have their lists, record labels have their lists, so are there ways we can promote these gigs more effectively?”

“There are a lot of moving parts to get to promote a show. We have to find ways that really automate the marketing of these shows. ‘Okay, these are the two most important things we need to do: the manager is best positioned to do this, and the promoter to do that…'” 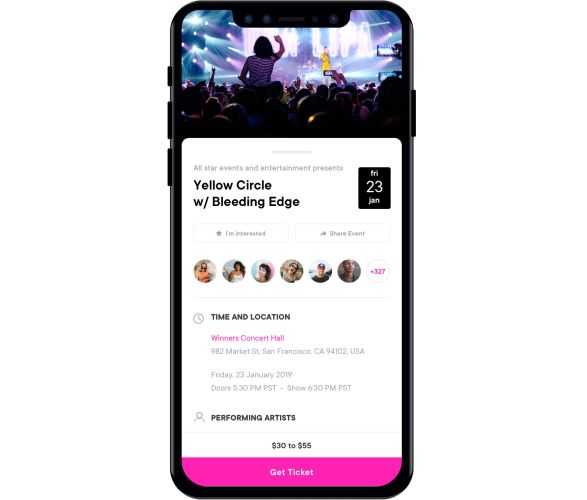 Blockchain technology and the Tari protocol is a big part of why Big Neon is so interesting, but it’s also clear that the key to any success will also come from doing the nuts and bolts of ticketing well – and indeed, better than established, larger rivals. And if it does that, then Tari itself (and blockchain technology more generally) will be boosted.

“And our job is to make this smooth and easy. It should just work for consumers and independent promoters and venues. It just needs to make people more money! I envision a world, a couple of years from now, where as an industry we’re talking less about blockchain, and getting back to the business of solving people’s problems.”

The Trends Report is designed to set your synapses buzzing with ideas, and put you on the front foot in 2022. In it, we look back at what happened in 2021 – that most complex of years – and turn what we learned...
© Copyright Music Ally All rights reserved 2022 - Website designed and maintained by