Drake didn’t quite get a clean sweep of the streaming services’ end-of-2018 charts: Justin Timberlake was Amazon Music’s top artist, for example, while SoundCloud’s rankings were headed by Juice WRLD.

Now Vevo has released its end-of-year rankings, with Maroon 5 the big winners. The band were the most-viewed artist globally through the music-video company’s distribution channels, generating 1.6bn views globally – this is just from new videos released this year, rather than the back catalogue. Their ‘Girls Like You’ was also the most-watched Vevo video of 2018 with 1.3bn views globally, ahead of Becky G and Natti Natasha’s ‘Sin Pijama’ (1.1bn) and Drake’s ‘God’s Plan’ (887m). Overall, Vevo tracked more than 260bn video views so far in 2018, averaging 24bn views a month. Note, this is actually a decline from 2017, when Vevo said it was generating more than 25bn monthly views globally. The company shut down its owned-and-operated site and apps in May. 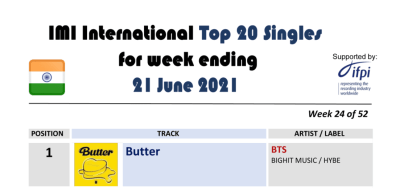 The Indian music industry is kicking off a process of launching charts tracking the most popular music in the country, starting with an International Top 20 Singles Chart India which launched this week. It’s due to...
Read More

In the age of TikTok, it was impossible to ignore the worlds of influencers and short-form video at our Sandbox Summit Global conference last week. Sessions included a fireside chat between Warner Records associate director...
© Copyright Music Ally All rights reserved 2021 - Website designed and maintained by