CEO Hans-Holger Albrecht revealed the figure in an interview with Music Ally, as he explained how Deezer’s business has evolved since he joined the company in December 2014, at a time when its business was heavily dependent on bundle deals with mobile operators – notably Orange in France.

“Four years ago, 80% of the revenue was telco-driven, of which the majority was coming from France. Now 75% of the revenues are coming from self-pay subscribers, and France is less than 50% of revenues. It’s quite a dramatic shift,” said Albrecht.

(Deezer’s 2015 filing for its subsequently-cancelled IPO showed that ‘bundles subscriptions’ accounted for 49.5% of its revenues in 2014. However, its ‘standalone subscriptions’ income stream included ‘indirect’ subscribers who’d signed up through a partner – like a telco – but who weren’t getting it as part of a mobile-plan bundle. Those people would count as “telco-driven” revenues in Albrecht’s definition now.)

Albrecht was talking to Music Ally at the end of a busy year for Deezer, including a $185m funding round in August; its launch in the Middle East and North Africa in October; and a steady stream of hardware partnerships, new features and artist-marketing initiatives for its core service.

“On the product side, we made a lot of progress in terms of engagement numbers, new features and innovation. And on the business side, nowadays we know how conversion works, we know how to work on churn, and I think we have an obvious strategy in terms of which territories we focus on,” he said.

“We have around 14 million monthly active users, and we have more than seven million payers, so we have a good ratio of paying subscribers [to free listeners]. And we are touching $400m in revenues this year, including growing fast on the direct-customer side. The numbers are quite solid, and we are going to see what the MENA region adds next year.”

MENA (the Middle East and Africa) is a strategic priority for Deezer, and also the home of some significant new investors from that $185m funding round: Saudi Arabian investment fund Kingdom Holding Company and media firm Rotana Group – the latter brought an “exclusive, long-term” deal for Deezer to distribute its music division’s catalogue in the region.

“The fundamental excitement is being part of a revolution in how people are going to consume music. Many people are going to leapfrog from no music – or limited music – to streaming. They’re not going to go through this chain of physical [formats] then downloads,” said Albrecht.

“But you have to approach these kinds of markets and regions with a certain degree of humbleness. Egypt is very different taste-wise to Saudi Arabia, which is completely different again to the Lebanon for example. You need to do this country by country, be very local, and try to adapt to local needs.”

Deezer’s MENA debut was followed by Spotify’s launch in the region in November – Apple Music has been there for some time – while local service Anghami has been operating since 2012, building an audience of more than 70 million listeners.

Albrecht was keen to draw dividing lines between Deezer and Spotify, citing the Rotana exclusivity as evidence.

“I don’t think it will exclude other players like Spotify from having their position as well, with international music. It just positions ourselves very strongly as a local, Arabic-music-driven service in the region, which is what we want to be,” he said.

“There’s a certain target group that wants to be global and international: to go for McDonald’s and pizza rather than for local food. Spotify will serve them, I guess, but we have a different approach. We’re very local.”

“We don’t have to own the market 100%. That never happens, unfortunately! We just want a very good part on the local side, and that requires adaptation and humbleness. People want to have local things as well: there is a limit to internationalisation.”

(Spotify, clearly, would argue that it has also adapted its service for the MENA region: for example launching a suite of locally-curated playlists alongside its launch, as well as an ‘Arab Hub’ that’s available worldwide.) 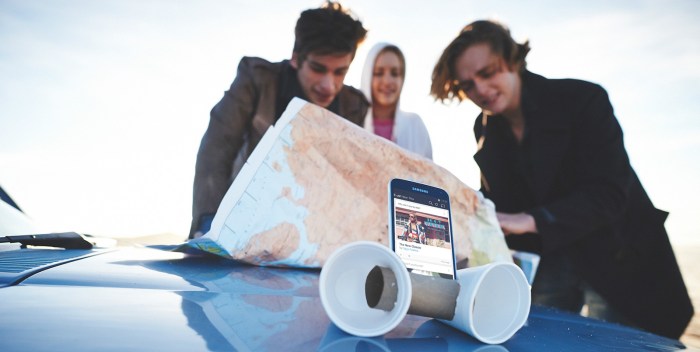 On a bigger-picture level, Albrecht suggested that the latest funding round has reinforced Deezer’s credentials to be considered alongside Spotify, Apple Music, Amazon and Google Play / YouTube Music at the global streaming table.

“We have a global footprint, operating in 180 countries. Equally, we know we are the small fish in the big pond. We are the smallest of the biggest, let’s put it that way. So we know we have to be focused in what we are doing,” he said.

Albrecht was keen to tackle suggestions that those bigger fish will carve up the global market between them. He noted that in France, penetration of streaming subscriptions is still below 10%, meaning that there is plenty more growth to compete for.

“In Brazil, it is only 2% or 3% penetration! In Germany, it’s not touching 10%. If you go to MENA, it’s close to zero. Latin America is still very small. There is still a lot to grow in that respect, and we have always said it’s not a one-player, winner-takes-it-all market,” he said.

Albrecht suggested that Deezer is the second-biggest

streaming service in Latin America as a whole, including being in the running for top spot in markets like Colombia.

“What is interesting is if you go outside Europe and the US, Amazon is not that present. The platform giants are not that powerful. iPhone sales are way lower in those markets than in the US, so for Apple it’s a different ball game. In that kind of competitive landscape, it’s not easy for them to compete with Deezer and Spotify!”

Albrecht added that the $185m funding round reinforced Deezer’s credentials to be considered as a top-tier global streaming service, but admitted that it may have come as a surprise to some people within the music industry who had written the company’s prospects off.

“There was a belief in many people – I would say the majority when we started [in late 2014 when he became CEO] – there was a question of survival,” he said.

“Not only did we have to fix a lot of things internally to get better, but on top of that we had two of the giants launching against us, Apple and Amazon, and then Spotify fast growing. So it wasn’t an easy one. But I think now – and this is what the new investors saw in particular – there is some big value in the company.”

Albrecht suggested that Deezer’s core product plus its strategy of localisation in emerging markets makes the company “very interesting” from the point of view of investors and other kinds of potential partners.

“If somebody wants to enter as a latecomer into the music industry, which some platforms or other companies will think about, Deezer is an interesting partner for them. We are independent and we can do a lot of things,” he said.

“Or if you look for other activities in the future, in terms of M&A, Deezer is a great partner in that respect. It wasn’t as obvious 18 months ago, maybe, as it is today. But when you look at the company how it is now, at the valuation, you see there is a big upside.”

At the time of the funding round, reports suggested that it valued Deezer at $1bn – ‘unicorn’ status in tech parlance – although it could arguably be worth more.

Spotify’s market cap at the time of writing is just under $20.1bn. That’s roughly 3.4x its anticipated annual revenues in 2018. By that marker, Deezer’s valuation could be more like $1.36bn, if it hits $400m of revenues for 2018. But this is academic until Deezer goes public or fields acquisition offers. On which point…

That comment about “in terms of M&A, Deezer is a great partner” – does that mean Deezer is potentially an acquisition target in 2019 for some of those bigger fish? Its renewed focus on regions like the Middle East and Latin America could be seen as a strategy to make Deezer attractive in that sense.

“It’s not a question management is asking itself. The job of management is around the business,” was Albrecht’s straight-bat response to the question. “Clearly, Deezer is a very attractive company with great products and a great model, and all the rest. We’ll see: it’s up to shareholders.”

It’s not so long since Deezer was cited as a potential acquirer of SoundCloud (not least because Albrecht told Reuters in September 2017 that he’d be keen on such a deal “at the right price”). Armed with its latest funding round, and not forgetting that billionaire Len Blavatnik’s Access Industries is also a key shareholder, Deezer may yet return to the idea of snapping up competitors.

Albrecht suggested that Deezer “wouldn’t have been ready operationally two or three years ago” to make acquisitions, but that now it is open to the idea.

“There’s a lot of movement. It’s a $60bn potential market opportunity, so there will be movements and new alliances, like SiriusXM and Pandora,” he said.

For now, Deezer’s focus remains on improving its service and striking more hardware partnerships – “three years ago we had two or three hardware integrations, now we have 85” – while also continuing to lobby in Europe for what Albrecht describes as ‘fair competition’ on the app stores and devices owned by Apple, Amazon and Google.

Deezer has already teamed up with Spotify, SoundCloud, 7digital, Qobuz and Soundcharts to form an association called Digital Music Europe to press its case in Brussels – “We are hopefully going to meet the commissioner again in January,” says Albrecht – and capitalise on what he sees as a willingness from European policymakers to push back against any domination of big technology companies from the US.

In October 2015, Deezer cancelled its plans to go public. How does Albrecht feel when reading headlines about the latest ups and downs – mostly downs, recently – of Spotify’s share price, following its direct public listing last year?

“Look, I think it was a very successful IPO. I think it [the bumpy share price] is very short term. They have a great model, they have very good management, and they operate in a huge market,” he said. “Investors can see huge value in the streaming services.”

Albrecht is intrigued by some of the trends within this market: for example the opportunities for streaming services to work more closely with artists, along with the tensions (for labels) around Spotify’s direct licensing relationships with some artists, and its tool for direct uploads by others.

“It’s just the beginning. Who’s positioned best? This is what the game is all about right now. Will major labels be the big winners, or will the platforms become bigger? It’s fascinating times. But one thing won’t change: the contact to the end-consumer will be the streaming services. And that’s the value [of the streaming services] that investors see,” he said.

Deezer isn’t rushing to strike similarly-direct deals with artists, though, choosing instead to focus on its Deezer Next initiative for promoting emerging artists.

“We have, fundamentally, no desire to be a label, or to be in that kind of business. We want to be the friend of the labels, and to work with the labels,” he said. “We’re the natural partner for the labels in that sense.”

Expect a blizzard of charts in the coming weeks as the various streaming services reveal the artists, tracks and podcasts that were most popular with their listeners in 2021. Deezer is one of the earliest – sensible,...
Read More

German broadcaster RTL gets into music streaming with Deezer

RTL announced that in the first half of 2022, RTL+ will be "expanded to a cross-media entertainment service, comprising video, music, podcasts, audio books and e-magazines".
© Copyright Music Ally All rights reserved 2022 - Website designed and maintained by