Global music-streaming: ‘For growth you have to look outside of the Western markets’

Spotify, Apple Music and Amazon may dominate many of the discussions about music-streaming, but there is more to the global streaming market than the biggest players.

A strand at Music Ally and Music Biz’s NY:LON Connect conference in London today explored life beyond the big beasts, although it started with Nielsen Music’s VP global Helena Kosinski providing a global overview of streaming.

The IFPI, she said, is claiming that “music is a growth industry once more”, seeing 41% YOY growth. “It is actual money,” she argued, “and not just streams.”

Obviously Western markets are growing sharply and India and South America were hailed as boom areas, but she termed the Middle East and Africa as “very exciting areas”, with a lot of services (international and local) investing there. “There is a bunch of early-stage interest,” she said.

Nielsen’s latest research involves aggregating data on global streams from services including Spotify, Apple Music, Amazon Music and YouTube, and producing a chart of the 200 most-streamed songs in the fourth quarter of 2018.

She revealed that DJ Snake’s ‘Taki Taki’ was the most streamed song globally in the period and this was in part down to a whole host of featured artists from different markets – Selena Gomez US), Ozuna (Puerto Rico), Cardi B (US) and Snake himself (France).

“This is a good example of what you need to have a global hit,” she noted.

Kosinski also offered a language breakdown of the biggest hits of Q4. English made up over 50% of songs but Spanish was second and Hindi was third. The industry is becoming more global and this internationalisation is going to utterly shape its future.

Of the 200 most-streamed songs in Q4 2018, 72% were released in 2017 and 2018. The top five countries of origin for artists were (in order) the US, the UK, India, Puerto Rico and Colombia in that order. Note India’s position, reflecting the huge impact that YouTube is having.

(At the time of writing, the top three musicians globally on YouTube are all Indian: Neha Kakkar, Kumar Sanu and Alka Yagnik had 265m, 233m and 229m streams last week respectively. Compare that to Ariana Grande’s 91.7m weekly streams on YouTube in the same week.)

“What do we expect to see in 2019?” Kosinski asked. “Continued growth in volume terms from India, Africa and the Middle East and growth in revenue terms from Europe and North America.”

There will, she forecast, be more consolidation among services, African and Middle Eastern acts will start to go global but there will be new challenges for acts to break out of their local markets.

Nielsen’s presentation was followed by a panel focusing on some of the regional music services that have built significant audiences.

Wenham began by suggesting Western companies are seeing these markets and more as huge opportunities but are, she believed, still scratching their heads about how to grow in these markets.

Moroun talked about how Anghami has grown by being finely attuned to the local markets it works in. “We are way more local [that international services],” he said of the service that has been live since 2012, offering both Arabic catalogue and international hits. With a team of 120 people across the region, feet on the ground is key.

“Having an office is Saudi is a breakthrough,” he said of changing political and cultural attitudes in the country, adding that Anghami is opening an office in Morocco soon. “We believe the new audiences want something that is local but the international acts are attractive to them,” he said of how to get the mix right.

Sidorkov opened by revealing that vKontakte has 97m monthly active users while its music service is comfortably the leading streaming platform in Russia, with two million paying subscribers.

“We created in the Russian market a unique situation,” he said of the service that rolls social media and entertainment into one offering. He said that mainstream media did not cover hip-hop or underground music so vKontakte became the key platform for new music and gave it a massive advantage.

“Now all the hip-hop acts use our platform for how they reach their audience and sell out stadiums,” he said. “For them it is their homeland.”

Asked if being homegrown offered an advantage in terms of having an innate understanding of the market, Moroun argued this was critical.

“In our case we have had the luxury of time and been in the market for six years,” he said, adding that Apple has been in the region for three years but is not gaining traction as fast as some presumed.

He also suggested the international DSPs are not, out of necessity, treating the Middle East as an advantage which means Anghami can dominate without serious competition.

“They have much bigger fish to fry and they have the whole world to conquer,” he proposed.

Lai spoke of the situation in China and how it has been slowly opening up to Western music since the 1980s. This, she said, is seeing interesting new generational dynamics.

“For the young Chinese audience, they are now growing up with some understanding of Western pop music,” she claimed, but added that to really understand China you need to grasp the fact that while young consumers have an interest in Western music, half of them are only really interested in local pop.

She also spoke of the importance of album download sales, something specific to the Chinese market.

“The Chinese platforms are very good at engaging fans,” she explained. “You can buy as many copies of that album as you want [for a minimum price].” Costumers there are buying multiple copies of albums to show how much of a fan they are.

“I want to be Adele’s biggest fan so I want to buy as many albums as I can,” is how she summarised fan thinking here, meaning albums become like trophy purchases.

With all the major Western social platforms banned in China, she said that acts going into the market have to build their presence of local social networks from scratch. She also said Chinese fans expect rolling engagement – not just bursts of activity when an album or tour is happening.

“You need to have some understanding of what a market is and look further than music,” she recommended. “It is about culture, politics, economics and other factors. But what is important is the infrastructure of the internet there and the cost of data. If data is expensive or not is a big differentiator between markets.”

She added that you need to understand that non-domestic acts do not have the whip hand in many of these emerging markets. “You are looking at markets where Western music reaches 10-15% of the market if you are lucky,” she cautioned.

Wenham argued that the previous arrogance of some from the Anglo markets is being challenged in the new global market and they are getting a rude awakening, as they cannot assume a sense of superiority. They must learn where they fit into these new market dynamics.

Sidorkov suggested that hiring a Russian social media expert to run your artists’ social channels was the most important thing to get a foothold in the market there. But they must also think about special projects and activities specific for Russian fans to give them the engagement they crave.

He gave the example of Muse playing there recently and asking vKontakte users to vote on three songs they should include in their shows in the country, generating 200,000 fan votes.

As in China, he said going offline is not a wise move, with maintaining a constant social presence being paramount. “This is why local artists are really strong,” he said. “They are online with their fans 24 hours a day.” 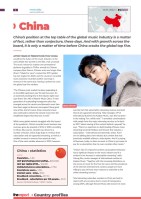 China’s position at the top table of the global music industry is a matter of fact, rather than conjecture, these days. And with growth across the board, it is only a matter of time before China cracks the global top five.
Read More

Stop us if you saw this one coming, but the National Copyright Administration of China has officially banned exclusive copyright licensing deals.
© Copyright Music Ally All rights reserved 2022 - Website designed and maintained by