The audience voted on which was their favourite, and ClicknClear prevailed. An achievement more impressive because of the high quality of all the pitches, and the technology they showcased. Here’s our roundup of each startup’s presentation. 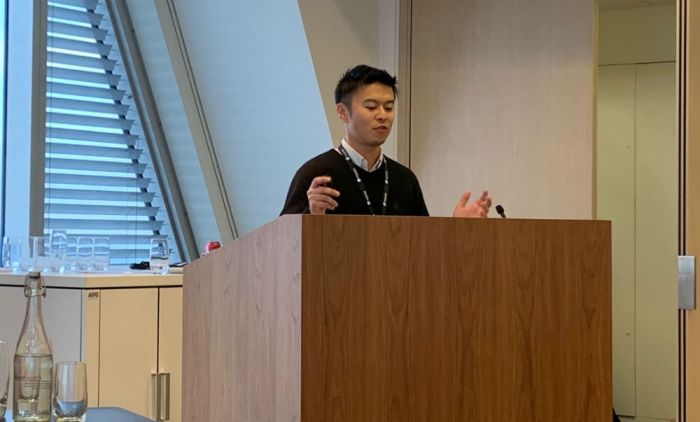 COO Taishi Fukuyama pitched Amadeus Code, an AI-powered music-composing app, designed to be used by songwriters. “Music creation is going to undergo a transformation on a scale that we can’t currently imagine… because our brains have difficulty with the concept of frame of reference,” he said.

Fukuyama rooted this technology in musical history, noting that the piano was the disrupter of the 18th century; brass instruments made by metal-welding technology fulfilled that role in the 19th century; electric guitars in the 20th century; and modern digital audio workstations (DAWs) in the 21st century.

“In each of these interim steps, it’s hard to imagine what the next one will be, because our imagination is limited to our current frame of reference,” he said. “Could we have imagined what rock would have sounded like without the electric guitar, or hip-hop without the sampler?”

Fukuyama’s bet is that AI will bring the next big creative disruption for music. Amadeus Code’s mission is to create an AI that lets anyone create “10 songs in one minute with one finger”. The first iteration is its mobile app.

“We curated a database of songs that have had social or economic impact,” he explained. They’re then broken down and catalogue with a proprietary songwriting language to become ‘licks’ – “the atomic units of music creation”.

“You can say ‘I need something that is rhythmic and comes from the 80s’ and then the melody will be based on that criteria,” he explained. The app launched with around 30,000 ‘licks’ and now it has more than 1.4m. “For our AI to create a song, on average we use about 50 of these licks… the chances of duplicating a copywritten material is almost zero.”

People can try the app for free, then pay $1.99 per song they want to keep, or a $9.99-a-month subscription to keep as many as they like as audio and MIDI files. Eventually there will be an enterprise version: for example for game developers to quickly create music based on their requirements.

“Music creation is driven by technology, and for the first time AI will allow us to hack and redesign how we think about creativity itself,” he concluded, while stressing that it’s humans’ creative minds that will push this technology to new and interesting places. 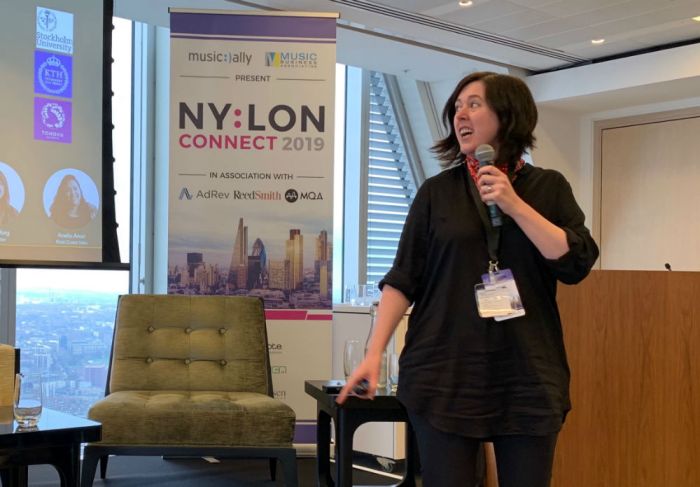 CEO Hazel Savage pitched Musiio, which is also using AI technology, but not to create music. “We are solving the issue of the explosion of content,” she said, pointing to the way the barriers to entry for creating and releasing music have come tumbling down.

Musiio’s tech takes those audio files and makes sense of them using AI technology. It can do automated search through a catalogue of music for a sync company; it can identify new talent for labels – “if you’re an A&R exec at Sony, you work for a jazz imprint, you want female vocalists, we can narrow that down”; and it can curate audio for streaming companies.

“Spotify definitely have the best algorithms when it comes to weekly discovery, daily mixes, but there’s a lot of other streaming services out there,” as Savage put it.

“We have three proof-of-concept pilots currently running on customers’ own data, and two commercial contracts in progress,” she said. “The partnerships that we already have have given us access to over one million tracks, which allows us to build the AI and test data-points.” 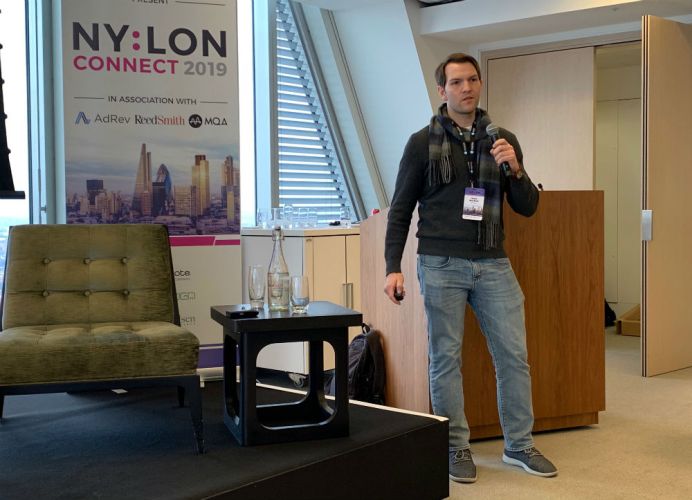 CEO Jason Burchard pitched Rootnote, talking about how the company aims to help artists and their teams to build their own companies to handle their business.

“There are plenty of stereotypes about success in the music industry, and many of you are working with artists coming forth and proving those stereotypes wrong on a daily basis: artists who are becoming entrepreneurs and innovators,” he said, addressing the NY:LON Connect audience. “But you also know how hard it is to build a creative business when the structure does not fit the strategy. The creative industry is not built for creative entrepreneurs.”

Hence Rootnote, which works with artists and their teams to build companies around both traditional and non-traditional revenue streams. So, an artist’s company aggregates revenues from recordings and copyrights, live performances, and merch and other brand activities.

RootNote owns an equity share in that company, but artists can buy it back from them five years after launch. “We’re conservatively targeting a 5.7x return multiple on our original investment… our model is built on sustained revenue growth and realistic expectations. While we’d love to invest in the next unicorn artist, our financial success is not dependent on it,” said Burchard.

He stressed that the company does not take ownership of songs or recordings. It launched in September 2016, secured initial funding int he autumn of 2017, and in 2018 made its first two investments. Over the next five years, it’s aiming to raise $2.4m more and make 37 seed investments – including five this year and 10 next year. It’s currently closing an investment round. 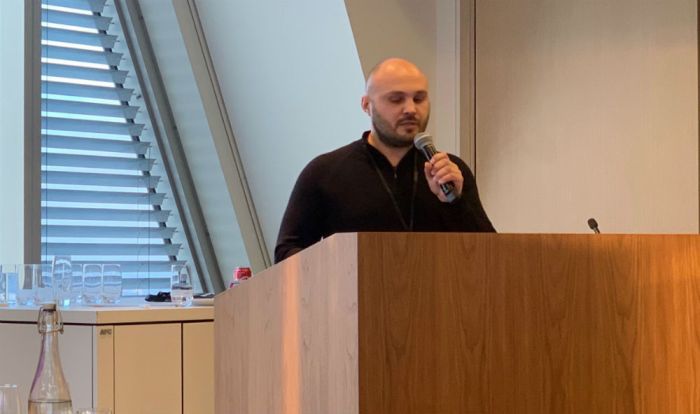 Co-founder Luke Dzierzek pitched adaptive-music startup Scored – “a dynamic music format that contains multiple layers of audio, all the stems, and it’s streamable to many different devices, and i’s really efficient”. The idea being to make it easier for (for example) TV and film editors to sync that music to video.

“It allows you to essentially control and adapt music in a very intuitive and seamless way to fit the on-screen action in real-time,” he said.

It also has smarts: suggesting what soundtracks might work better (for example) for a younger audience, based on analysis of Instagram data, as well as identifying elements of videos and adding in suitable sound effects.

Scored charges a monthly fee, while also taking a share of the publishing catalogue monetisation. “It can cater for a lot of other markets as well,” he noted – not just video. Scored has been working with artists to deliver music in the Scored format to its catalogue.

“We’ve been experimenting a lot with how we can apply this to social media as well,” he said. That would mean people can create adaptive music for the videos they’re sharing to social networks, even if they have no video-editing experience.

The tech involves audio analysis and deep learning, as well as computer vision (to understand what’s happening in a video). “We really do believe that dynamic music is the future and it’s a huge opportunity. The underlying technology can apply itself to AR and VR and other elements.” 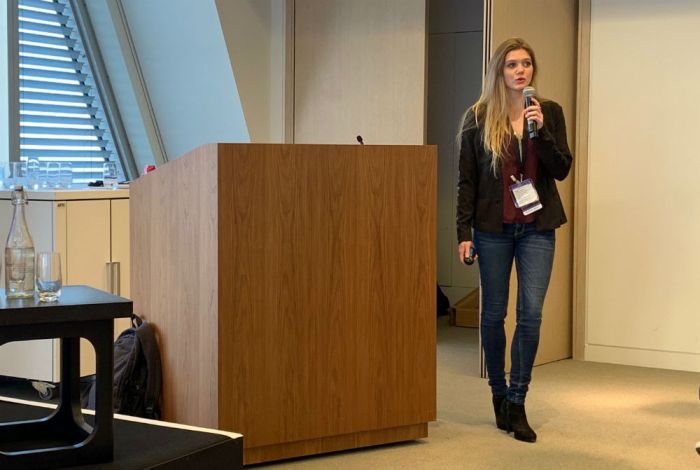 Finally, CEO Chantal Epp pitched ClicknClear, which focuses on music-licensing for performance sports like cheerleading, gymnastics and figure-skating. Teams in these sports will currently create their own customised music mixes for performance “without licensing the music, paying the artists or anything”.

Sony Music has sued some music producers in the cheerleading industry, which opened the way for a startup to create licensed mixes and pay royalties. Hence ClicknClear.

“We’re focusing on figure skating, dance, gymnastics, synchronised swimming, pole fitness and many more. Together, this is a $1bn untapped revenue opportunity for the music industry, where we can monetise music that already exists,” said Epp.

ClicknClear pre-clears master and publishing rights for the tracks in its catalogue, working with major and independents. It also licenses more specialist rights like choreography and adapt. “We’ve been able to agree low fees at $25 per track for top content,” she said.

The company also curates the music on its platform to help its performance-sports customers find what they need, and works on education and enforcement within those industries. “We speak to the governing bodies to ensure there are rules in place saying that they have to license music. So we’re not just a standard DSP, we’re much more than that.”

“There’s a substantial new revenue opportunity for the music industry with little to no effort, and for us it’s a viable business model where we just take a percentage of the revenues earned.”

ClicknClear has deals with more than 100 rightsholders, and has a catalogue of more than 6.5m tracks, while it has also just become the approved music vendor for the International Cheer Union – ahead of cheerleading becoming an official Olympic sport.

The company is also working with collecting societies and event producers to ensure that performing rights are being licensed, and that PROs are getting good reports of music used at an event. And for the future, it’s hoping to scale beyond performance sports to other sectors.

The Trends Report is designed to set your synapses buzzing with ideas, and put you on the front foot in 2022. In it, we look back at what happened in 2021 – that most complex of years – and turn what we learned...
© Copyright Music Ally All rights reserved 2022 - Website designed and maintained by