Amuse is the Swedish music company that’s part distributor – a platform for artists to upload their music to streaming and download services – and part record label, working more closely with talent that’s emerged from its distribution arm.

Launched internationally in 2017, the model is similar to that of Kobalt’s AWAL with its combination of distribution and a higher tier of label/artist services. Amuse now has hundreds of thousands of artists on its distro platform, and raised a $15.5m funding round in May 2018.

Now it’s launching a way for those artists to get paid up to six months’ royalties in advance. The feature is called Fast Forward, and it’s launching in beta today with a group of musicians, before rolling out to more in the coming months.

“What we’ve done since we first started talking about Amuse is to prove the business works: that we could build a label on top of this fantastic data layer [from the distribution arm],” Amuse CEO Diego Farias told Music Ally in an interview ahead of the announcement.

“Fast Foward is an extension of all of those things we’ve been doing. Now feels like a perfect time to add things into the value proposition, with the intention of keeping true to our core values.”

At the heart of the new feature is Amuse’s belief that streaming revenues are stable and forecastable. A similar view is driving other current trends in the music industry: from investors’ willingness to splash out on buying publishing catalogues, to startups buying chunks of artists or songwriters’ future royalties. 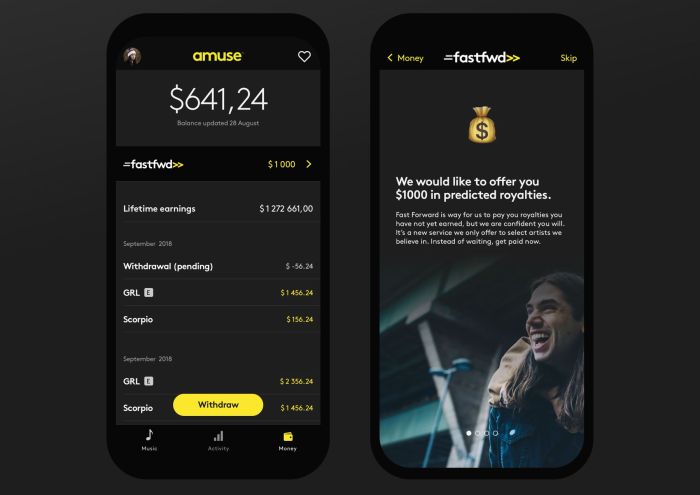 As Farias pointed out, much of that activity is focusing on established catalogues of recordings or songs, while Amuse’s new feature is tackling something more risky: “the fast-moving frontline side” for artists who are still emerging.

“How can anyone predict where music is going with a high level of accuracy? But nobody in the world has the ability we have. Our system is analysing more than 27bn data points to determine future royalties,” said Farias.

“That sounds like a stupid number, but that’s just to highlight how incredibly complex this is. It’s not something you do on the back of a napkin and then get started! Is this incredibly-granular information different from what others have? No, but our ability to break down that information is different to what the majors and indies are doing.”

That’s a grand claim, of course, and one that’s hard to prove or disprove from outside. What Amuse is doing is using machine-learning technology (Farias says he tries to steer clear of using the term ‘AI’ as a buzzword) to analyse data from the company’s catalogue, then to determine risk for individual artists in order to calculate an advance royalty payment.

It’s a new spin on the traditional record-label advance. “When I joined the music industry in 2011, at Warner Music, I never quite understood the concept of an advance,” he said.

“It was a very arbitrary number, set without really knowing what the potential was or where the project was going to go, and tied to long contracts and different types of lockdown periods. Amuse is approaching this from a completely different standpoint, with none of those traditional constructs that made me feel queasy in the past.”

Fast Forward has been in tests since before Christmas with some artists. Farias cited Northern Irish band Blue Americans as one example: they were offered a concert in London and used a Fast Forward advance-payment to cover the costs of travel and accommodation, rather than turning the opportunity down for lack of funds.

That plays in to a point Farias was keen to stress: Amuse sees Fast Forward’s benefit for many artists as intensely practical: from touring costs and studio sessions to “paying their electricity bill” in an emergency. These may often be small payments (“for some artists, an advance of $200 might be enough for them to do whatever they need to do”) but they will have a meaningful impact.

How is Amuse deciding which artists qualify for Fast Forward in these early stages? For now, it’s not making public any details on eligibility.

“A million streams can mean almost a million different things. What is driving those streams, what demography, is it free or family accounts for example?” said Farias. You can imagine that questions such as whether an artist’s streams come mainly from an organic fanbase versus a short-term spike from a playlist also factor in.

“For us, it all starts with the artist being on our platform so that we can collect the information, primarily for their sake, but also for our sake to figure out what the composition of their streams looks like, so we can make a really strong offer to them,” said Farias.

The plan with Fast Forward is to ultimately make it available to artists using Amuse’s distribution tier – it’s not just for those signed to its label. Farias suggested that it’s “the first of many” technologies that will come out of the company’s label business for wider deployment through its distributor. 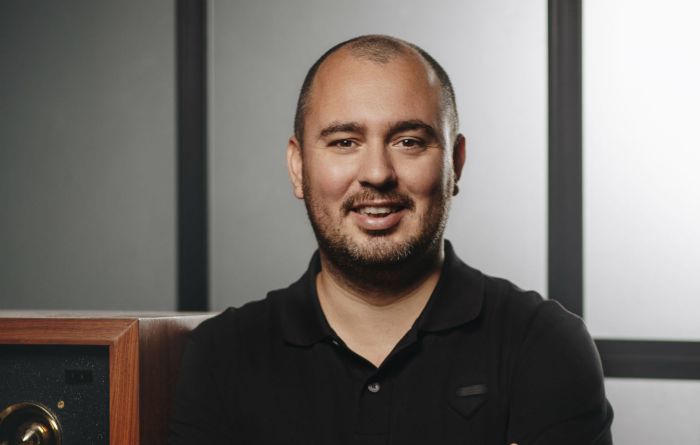 That’s part of Amuse’s wider growth story: the company “grew like crazy” in 2018 in terms of artists on its roster and its commercial success, although the company is keeping details of its business metrics close to its chest for now.

After closing its funding round in April 2018, Amuse also expanded its team and opened new offices: it now has staff in London, Los Angeles, Miami and Bogota in Colombia. Farias is particularly animated about the latter.

“LatAm is the most exciting market for me. It’s a super, super-interesting market,” he said, citing the rapid growth in the audience of Spotify in the region as a big opportunity for Amuse, and independent artists more generally.

“It lends itself to the DIY, mobile-first value proposition,” he says. “Mexico, Argentina, Chile, Brazil and Colombia are all very exciting at this point.”

You can also see Fast Forward in the context of Spotify’s recent announcement that it was testing the ability for artists to upload their music directly to its platform. It’s a big warning shot for any distributor whose offering doesn’t extend much beyond getting artists’ music onto digital services.

While distributors – Farias included – point out that artists would be foolish to focus purely on Spotify, the prospect of direct DSP uploads is a powerful spur for distributors to up their efforts around other services and tools for their artists.

For Amuse, data-driven advance payments are part of that pitch, although other companies will surely also be exploring this. It feels like the sort of thing AWAL would be looking at, for example. Meanwhile, Revelator is launching a subsidiary with the stated ambition of paying out daily streaming royalties to artists, even if the money is coming in from DSPs at less regular intervals.

But also… Spotify. If and when it expands its direct-uploads feature, wouldn’t the really disruptive thing for Spotify to do be daily payouts, or even a Fast Forward-style system of advances for artists?

“I’m Swedish! I’ve grown up around Spotify, and I’m one of the biggest advocates for Spotify. They could do anything they want to do,” said Farias. “But we’re in a much better position to build this technology: we’re smaller, nimbler, and our technology is newer.”

That’s fighting talk, or alternatively a pitch for Amuse as a potential acquisition by Spotify or one of its rivals. But it’s early days for Fast Forward: the coming weeks and months will give Amuse a better understanding of how artists use the feature, and the chance for more fine-tuning of the algorithms behind it.

In July we reported on US Congresswoman Rashida Tlaib's plans to push for the creation of a new streaming royalty paid directly to artists.
Read More

‘What is a stream anyway?’ wonders Damon Krukowski

Artist Damon Krukowski has long been banging the drum over streaming royalties and musicians.