“Today, it is estimated that more than 5 billion people have mobile devices, and over half of these connections are smartphones,” explains the latest study from the US-based Pew Research Center.

It proceeds to explore some of the differences between countries: fertile material for anyone in the music industry thinking about smartphone habits around the world. “For example, a median of 76% across 18 advanced economies surveyed have smartphones, compared with a median of only 45% in emerging economies,” reported Pew.

“In emerging economies, too, smartphone ownership rates vary substantially, from highs of 60% in South Africa and Brazil to just around four-in-ten in Indonesia, Kenya and Nigeria. Among the surveyed countries, ownership is lowest in India, where only 24% report having a smartphone.”

It also has some interesting stuff on how the ‘age gap’ in smartphone ownership is particularly notable in emerging economies: “In the Philippines, for example, those 34 and under are 47 percentage points more likely to have a smartphone today than those ages 50 and older – compared with a gap of only 23 percentage points in 2015.”

Based on a survey of 2,500 people in the US and China listening to a variety of musical genres, research scientists at Berkeley have identified at least 13 emotions triggered by music across cultures. They are: amusing;...
Read More

The good news in 2019 about piracy has been that it’s declining for music. The latest evidence comes from a study published by the European Union Intellectual Property Office (EUIPO) examining consumption of copyright-infringing...
Read More 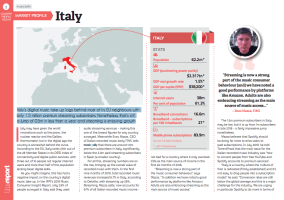 Italy’s digital music take-up lags behind most of its EU neighbours with only 1.5 million premium streaming subscribers. Nonetheless, that’s still a jump of 0.5m in less than a year and streaming is enjoying growth
© Copyright Music Ally All rights reserved 2020 - Website designed and maintained by