The current popularity of hip-hop and R&B on music-streaming services is enabling labels to sign more artists, and thus take more creative risks, according to Nicole Wyskoarko, EVP of urban operations at Interscope Geffen A&M.

“This is an amazing time to be in urban music. We’re able to really monetise urban music on a scale that we never have before: not that I’ve seen. And we also have the metrics to support it as well,” she said in a keynote at the FastForward conference in Amsterdam.

“In the past, it felt more niche, and now it feels like it truly is pop music, as far as popularity is concerned… It’s an exciting time, and it’s also exciting with the deals. We’re signing so many acts,” continued Wyskoarko.

“I feel like we get to really explore what urban music is, because there’s so many more artists we can work with now. Because financially it justifies it. We can sign an artist like Summer Walker, that’s R&B but maybe left-of-centre. Another artist called Ari Lennox. Or Juice Wrld.”

“People describe him as ‘emo-rap’ – a genre that absolutely didn’t exist before. We can really explore creatively, which is exciting… the emo-rap label has come from Juice Wrld being a rapper, being melodic, but when you read his interviews or talk to him, he references artists like Green Day and Fall Out Boy as influences.”

Wyskoarko only sees more artists emerging – and being signed to labels like Interscope – who defy easy categorisation (or, indeed, deserve their own brand-new category).

Wyskoarko was asked about the role streaming services’ programmed playlists are playing in breaking these kinds of artists – the subject of a spirited debate the previous day at FastForward.

She stressed that the first level remains getting an artist out there, performing, and building a fanbase. But she agreed that playlists are increasingly influential.

“If you’re a new artist, you’re fighting with these big, behemoth labels… and how do you get on the biggest playlist with the biggest reach? Or is that the strategy? Do you maybe focus on the smaller playlists that you do have access to, as an independent artist?”

Wyskoarko also talked about how she first established herself in the music industry, with an internship at Universal Music while she was still in law school.

“It was creating a job for myself… I looked for where there were holes: where we needed help. We had issues with rights clearances, particularly on the urban side,” she said.

“Features were important, but we weren’t really keeping track of what artists were being featured, and what rights we were granting from what labels… If Ja Rule was on 50 features, did that make sense? What were we getting in return from these labels?”

Wyskoarko created a system for keeping tabs on this data, and it became clear that if Universal didn’t hire her, someone else would have to fill that role. “It was easier, basically, to keep the person who created the role,” she said.

After 11 years at Universal, Wyskoarko joined a law firm (Carroll, Guido & Groffman) where she worked as an attorney with a number of artists.

“I was an A&R in a sense. I would seek out artists that were unsigned, spend time with them, and decide who I thought might have a shot. Or who I was just really excited about musically, and wanted to be part of their story,” she said.

In February 2018, Wyskoarko joined Interscope as EVP of urban operations, where her role now includes managing the label’s A&R team, from figuring out budgets for projects to making creative decisions, and helping the A&R team interact with other departments like marketing.

“They come to me with all the fires! All the emergencies. And I’m here to help solve the problems from a higher level. I can see how everything flows from a bigger scale, from 2,000 feet above,” she said. “And on the legal side I’m still involved with the deal negotiations.” 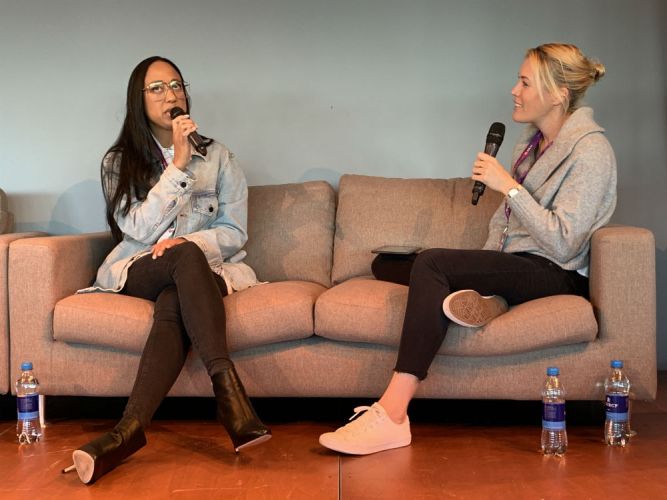 Wyskoarko was interviewed by Catherine Lückhoff, CIO of digital agency Swipe iX, who asked about her experiences as a woman in the music industry.

“I think that it’s something that I have turned into an advantage. But it’s not necessarily that it’s an advantage. It can be very challenging being a woman in the music business. I think the Me Too movement has been very helpful, and has caused a change that was much-needed,” said Wyskoarko.

She continued: “It’s just forced me to speak up, stand out. I’ve maybe had to fight harder than some of my male counterparts, and it’s fine – it’s made me stronger – but it’s also made me want to fight for more positions for women.”

Wyskoarko said that she has recently hired a new member for Interscope’s A&R team who’s a woman – “that I’m really excited about” – but pointed back to her earlier days in UMG’s business affairs department.

“I started as the only woman, but by the time I left, we outnumbered the men! If there’s more quality, you’ll have more of a voice, and you won’t need to yell to be heard,” she said, adding that she feels a responsibility to be visible.

“We have to be seen, so that other women coming up know we exist, and also to have someone to ask questions to, and to just be there for support. To speak up at events like this: when they know you exist, they know you’re someone they can maybe call,” she said.

In the Q&A section of her keynote, Wyskoarko was asked whether artist development is still a priority for a major label – the implication being that more of the development happens before an artist is signed.

“It’s a great question because there’s a feeling today that artist development has gone out the window, which I don’t think is true. But [it] has definitely evolved over the years,” she said.

“At a major, at least at ours, it’s really important for us to sign artists that we believe in, that we are passionate about. In part because it takes so much bandwidth to get an artist going and get the project out the door.”

“We have artists that have been signed to the label for many years that are being developed, but I still believe the development might be on a bigger scale than an independent,” she continued.

“You can think about a Billie Eilish. She’s been signed since she was about 14, and she’s 16 now and she’s putting her first album out next month. She did put out some singles and an EP, but this has been a development process over the past two years. We have artists like that, that we know are going to take time, but it’s worth the time.”

Wyskoarko noted that Juice Wrld was a different story: after he was signed in the spring of 2018, his studio album ‘Goodbye & Good Riddance’ came out quickly.

“He was at a point in his career when the music was going, and we just had to make everything else catch up,” she said, before returning to the topic of artist development, and what Interscope expects an artist to have at the point of signing.

“It’s hard for a label to sign an artist that has absolutely nothing else going on but the creative,” she said. “If there isn’t a team behind them, it is a challenge. They may be going from zero, but [it’s good if] the label knows there is a team to help accelerate the process.”

Wyskoarko also offered a piece of advice to younger people hoping to make their way in the music industry.

“Always return phone calls. I didn’t really think that was such a big deal at first, because earlier in my career I wasn’t getting that many phone calls! Now I make it a point to try to go through and return every phone call the same day,” she said. “People get upset! This is about relationships… and you might miss something important.”

She also offered her thoughts – “I think about this a lot!” – about what her super-power would be, if she had one.

“I would love to stop time temporarily. Everyone else would stop, but I would not. And I could just get things done!”

We reported earlier this month on speculation that Middle Eastern and North African streaming service Anghami might be up for sale, with a mooted valuation of $400m. Now the company has offered an official line on what’s...
© Copyright Music Ally All rights reserved 2020 - Website designed and maintained by