Playlists continue to grow in prominence (within the music-streaming world) and importance (for artists looking for their breakout moment). So what are the latest trends that artists, managers and labels should be thinking about and responding to? A panel at the FastForward conference in Amsterdam today explored them.

Arora showed some of Gracenote’s data on discovery. “There has been more access to music than ever before. With Spotify you’re looking at 90m tracks in their catalogue. So how do you discover new music that’s been released?” she said. “The amount of content that’s being added to these big platforms is insane.” 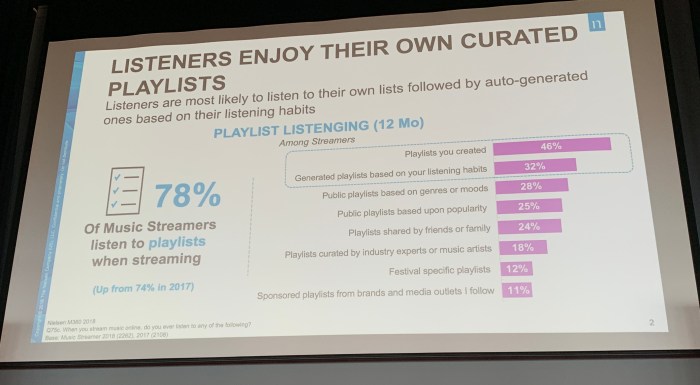 Arora added that 86% of teens and 88% of millennials listen to playlists, so they over-index compared to all music-streamers.

Lückhoff talked about what this all means for artists. A playlist can have a big impact, but the effort that goes in to getting on that playlist is a challenge. “That’s time that takes away, creatively, from all that you could and should be doing. And I don’t think playlists are a good measure of how engaged fans are with you,” she said.

Hemmings said his bigger concern is less the existence of playlists, but who’s controlling access to those playlists. As one of Spotify’s most prominent critics, he expressed particular concern about that service, but also its key rivals.

“I don’t like how they’ve monopolised that space. I understand why they’ve done it, they have to build a narrative… to show that they can be a large and valuable company,” he said.

“The lack of democracy around the playlists is where the problem starts… If the only person steering you into that is ostensibly one gatekeeper on the largest service, or two or three across the other competitors in that space, then you have a serious problem.”

Lückhoff suggested that this is no different to the old system of radio, where there were gatekeepers controlling the (radio) playlists just like there are curators of the streaming playlists.

“There are gatekeepers, but there are not monopolies,” responded Hemmings. “And to me, Spotify currently represents a monopolistic tendency in that space. They used to have a lot of other people in that editorial space… I find that approach, and the way in which this is controlled pretty bad.”

He gave the example of working in 2016 with label Trojan Records to curate playlists around dub, roots and other strands of reggae. “As a test we started a brand new Spotify account and played these all the time, to see what would happen in their account with the algorithm. And all that happened was Spotify promoted their own shitty recommendations. ‘You’ve listened to a load of great deep cuts from Trojan, so have you heard of Bob Marley?'” was how he paraphrased it. Hemmings previously addressed this episode in a blog post.

If algorithms had ears, Spotify’s would have been burning. “Playlists for me should be almost 80% algorithmic and 20% human. I fear a world where playlists are just done through algorithms,” said Lückhoff. “I’ve never had a Discover Weekly that even vaguely got it right.”

Hemmings said that music-streaming services still struggle with truly-curveball recommendations – “How would it know that I’d love the new Kacey Musgraves album?” – while suggesting that these services are also a “cold” environment in terms of listeners getting to know artists.

“The stories around the music and the context of it is often lost… if someone tells you the stories around it, it forges a deeper bond with the music and will also make you listen to it more. You can listen to Discover Weekly and give it 40 seconds per track. If the same playlist was given to me by a friend who says ‘I really love this, it means a lot to me’ I will spend significantly more time on it.”

Arora said that any recommendation algorithm is only as good as its inputs: what data there is on the listener’s habits, as well as other signals. She also suggested that algorithmic playlists like Discover Weekly are important, because they surface a deeper range of music.

“There is too much music that’s released and that’s out there. If it is all human curated, you only look at the tier one artists… If that’s not happening, how would you discover any of those newer artists on algorithmic curated playlists?”

As the biggest subscription music-streaming service, Spotify has become something of a lightning rod for criticism. Hemmings brought up the infamous Drake ‘takeover’, when to promote his new album, he appeared on the cover of a whole swathe of Spotify’s programmed playlists.

“The entire thing that happened around Drake was so unbelievably bad. Because it was Spotify going ‘look at what we can do!’ and the general reception was ‘this is all the ways you can fuck with my experience of Spotify’. By looking at Indie Hits and Drake was on the playlist cover!” he said.

“It wasn’t welcome. There were articles at the time saying it backfired on them: people were saying ‘I don’t like Drake and I don’t appreciate it’.” Hemmings compared it to Apple’s equally-controversial U2 promotion, where the band’s new album was automatically added to people’s iTunes libraries. “The world doesn’t need more Bono, and Spotify didn’t need more Drake!”

Hemmings also had spirited views on the process of pitching songs for inclusion on Spotify playlists.

“It’s become this comedic dance that doesn’t really mean a lot. There’s a person whose job it is to go to somewhere like Spotify and say ‘We’ve got this new priority and we’d love you to playlist it’. And there’s someone’s job at Spotify in artist or label relations to sit and go ‘That’s amazing, I love that track’. And then at the end of the meeting you ask if you can get playlisted, and they say ‘No! Because we don’t run the playlist, the editorial people do.”

“This process of trying to get on playlists is becoming borderline farcical,” continued Hemmings. “I’ve seen clients of ours go in and the only feedback they got is ‘Your song is a seven-minute techno anthem and it’s too long so we’re not going to playlist it’. I feel like Apple have more of a sense of an artistic conversation, so they’ll talk to you… Spotify will protest everything I’ve said vehemently, I’m sure, but I don’t think the experience of dealing with them is a creative conversation. It’s getting colder, and I think they’re not particularly great at fostering a close relationship with artists.”

The conversation turned to the idea of quotas for local artists and music on the big playlists of the streaming services. Lückhoff approved of the idea. ”

“Nigeria did a really good thing where they decided with shows like Big Brother, they were only allowed to play Nigerian music. And in the last 10-15 years Nigerian music has overtaken any Western music. If you go in a club in Lagos, you’ll pretty much only hear Nigerian music… The more we support local art and culture as a rule, the better for everyone.”

Arora agreed, with a note of caution. “It’s good if we have some quotas for local artists. They have a chance. But if you look at the global streaming services across Europe, across the US, across the majority of the other markets as well… all these global services, they have content from everywhere,” she said.

“We did this quick study to see what’s the breakdown of the top 200 most-played songs globally. What we found was that out of the 200, at least 50% was western content, sure. But there was a lot of Latin content, K-Pop, we saw Indian artists in there, and a bunch of other countries that we wouldn’t expect to see in the top 200. We live in a global economy now. What people listen to and what they like… so I don’t know how quotas will play in the long run.”

The panel finished with a discussion of whether the culture of worrying about skips – how often a song gets skipped by streaming listeners, and the effect that might have on its chances of getting or staying on the services’ programmed playlists – is potentially harmful for music itself.

“There’s been a discussion about the proliferation of beige artists… this notion that you can exist on playlists by not really soliciting a response one way or the other. You don’t prompt any response at all, which means you don’t skip, so you’re perceived as going down well,” said Hemmings.

“It is dangerous, because acts that have got teeth, and have got things to say and are a bit more edgy may not sit well within these playlists. Bands that agitate and push you to see things differently don’t really find the space. There’s definitely certain kinds of acts that become… not pariahs, that’s a bit strong, but they definitely don’t find homes on playlists that are operated by people like Spotify, and unfortunately that means they’re not going to get as much traction.”