Lost Girls is the musical duo formed by artists Jenny Hval and Håvard Volden. They opened the by:Larm conference in Oslo today with an original commission, ‘Chill List’, which zeroed in on the impact streaming-playlist culture is having on artists and their music.

The piece blended music with Hval’s (spoken) words, which were also shown on accompanying slides. After starting by listing some of Spotify’s big programmed playlists, and then a succession of ‘chill’ playlist titles, it segued into her personal experience as an artist. I’ve kept the line-breaks from the slides.

“your song is added to the women in experimental music
playlist,
says Email.
Thanks, I say, which song?
It’s the one where you don’t sing, says Email.
This is the second time this happens.
It’s the one where we can lean back listening.
says Email.
Just leave that voice and we know where to place you.
It’s not really silencing
I still got my fingers and my organs
It’s just the mouth that is the problem”

(I can’t remember exactly when and how I discovered Hval’s solo music, but I do remember where: I was walking along the street, and it stopped me dead in my tracks to listen, quite possibly with my jaw dropping. Her ‘voice’ as an artist, not just how she sings but what she’s singing – what she tackles in her lyrics – is very special. The point being whether streaming culture begs to differ.)

“And the ears, says App.
App has told me I need to redistribute my juices
As a listener and as an artist
My songs don’t need voice, leave that for
Instagram rants
Dissect yourself, direct yourself, use the numbers
to connect yourself, says App
App is now a songwriter
App knows that the word <<share>>
doesn’t just contain the utopia of free distribution,
but also: the sharp knife cutting into the flesh
taking away”

Hval’s music is on streaming services – her solo work and Lost Girls’ debut album. She currently has just over 48,000 monthly listeners and 27,000 followers on Spotify, with the ‘Women of Experimental’ playlist referred to in today’s piece apparently bringing her 758 listeners at the time of writing.

‘Chill List’ raised questions that are being talked about more and more as streaming becomes the dominant form of music listening – about the impact on artists that create work that sits outside the mainstream trends on these services. Especially in an era when the analytics are always available for artists to see how their music is performing.

“Use the numbers, says App
Not the voice or the ear
The voice annoys
but the numbers flow” 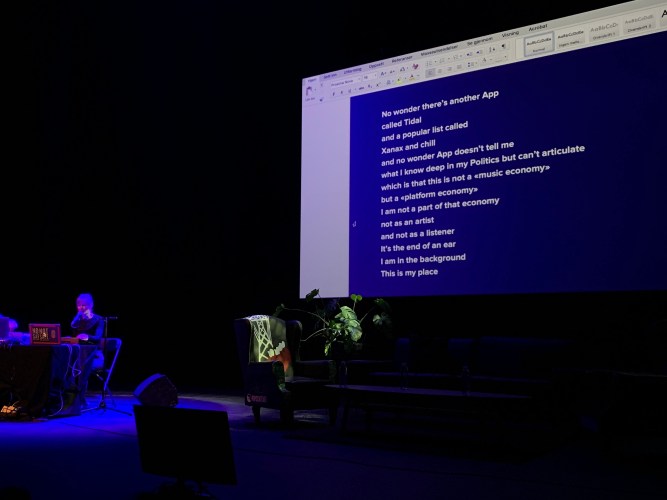 Lost Girls were a well-chosen artist to open this year’s by:Larm conference, given the theme running through it of ‘Are We The Robots?’

As the conference’s programmer Linnéa Svensson put it in her opening speech after the performance: “What happens to music in an age increasingly dominated by social media, algorithms, data harvesting and digital marketing… is this healthy for musicians and listeners, or is it in danger of being dehumanised?”

Hval also talked about “dreams / In which I am back at the school disco / against the wall / where I am never picked / for the slow dance / It’s because of your voice, says Disco” before finishing off with the suggestion that “I’m easier to forgotify”.

Based on the reaction within the room, however, by:Larm attendees won’t be forgetting Lost Girls’ piece in a hurry: this isn’t a clickbaity ’artist attacks Spotify’ story, but an important debate about how the margins are drawn on streaming services – and what that means for artists who sit outside them.

So, @jennyhval / Lost Girls performed an original commission to open @byLarm, called ‘Chill List’, addressing music/artists in the era of streaming / playlist culture. It was BRACING – hopefully will be made available in full somehow so you can experience it pic.twitter.com/mHsci9rlXY

Research firm Counterpoint Research has published its latest estimates for the size of the music streaming market globally. It claims that by the end of March there were 394m music subscriptions globally, representing year-on-year...
Read More

Spotify's latest campaign to create personalised playlists for listeners is called Soundtrack Your Workout, aimed at people who are exercising. On the new website, they choose a workout length (from 15 minutes to two hours);...
Read More

Podcasts have sent Spotify's valuation soaring in recent weeks, but they're also starting to generate income for the company. Yesterday, it announced a 'strategic podcast advertising partnership' with advertising giant...
© Copyright Music Ally All rights reserved 2020 - Website designed and maintained by