Another TV veteran joins Spotify to focus on original content

Spotify continues to look towards the television industry for executives capable of supercharging its push into podcasts and other non-music content. Having Dawn Ostroff from TV network Lifetime to be its chief content officer, Spotify has now returned to that company to recruit programming executive Liz Gately.

Billboard reports that she’ll take a role as head of creative development at Spotify, overseeing its teams in New York and Los Angeles as they develop projects in “comedy, sports, YA Fiction, scripted, news and documentary and music”. 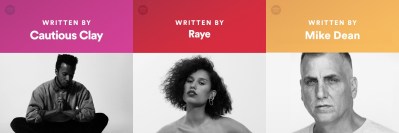 “It’s hard to overstate the importance of songwriters to the music-making process. They’re responsible for the lyrics, melodies, beats and chords that make up the songs we love,” is how Spotify opened its...
Read More

Persuading more people to pay for music streaming subscriptions is a priority for the Indian music industry. Could Spotify’s latest move help? It has launched a new ‘Premium Mini’ tier of its service there,...
© Copyright Music Ally All rights reserved 2021 - Website designed and maintained by