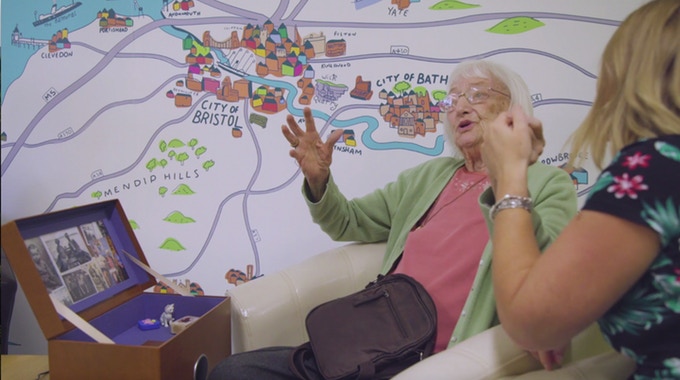 This isn’t really an industry story, it just seems like a marvellous project that we wanted to flag up.

Music Memory Box is, according to its Kickstarter listing, “a simple kit that you can fill together with meaningful objects, music and photographs. All three combine together to help unlock and recall memories in a simple and tactile way. It’s like a personal jukebox”.

It’s been developed in the UK as a physical-and-digital tool for people with dementia to “reminisce, reawaken and reconnect” with their families. Its developer Chloe Meineck had the idea when visiting her great grandma, who was living with dementia, and realising that music was a great way to unlock her memories. “Since then Chloe has developed the box alongside hundreds of people living with dementia, families and carers across the UK and Japan,” explains her Kickstarter page, where she’s aiming to raise £25k over the next month.

The box itself can contain physical objects like photographs or trinkets, which the family member then associates with a song using a stick-on sensor, and the ability to load tracks to the box via USB. “Once set up – just place an object in the centre of the box and the song will play. We’ve found that even people at the later stages of dementia can use this on their own.” The campaign is accepting pledges of as little as £10 to help it get funded, but £199 is the minimum to actually pre-order a box.

Spotify loves podcasts, as has been well documented. Some of its former executives clearly love podcasts too. Eva Lægdsgaard spent nearly nine years at Spotify, rising to be its director of artist and label services in the...
Read More

Journalists are continuing to pick over the ramifications of Spotify’s exclusive licensing deal for podcast The Joe Rogan Experience. The New York Times has some useful insights on the way Rogan’s success “was...
© Copyright Music Ally All rights reserved 2020 - Website designed and maintained by