In lots of countries around the world, the recorded-music industry has bounced back to growth. Last week, for example, the RIAA announced that US revenues grew by 12% in 2018. In the UK, the growth last year was 8.9% according to the BPI and ERA.

The story in these countries is that the growth in record labels’ revenues from streaming – and particularly streaming subscriptions – is more than making up for the continued sharp decline in sales of CDs and downloads.

What about countries where CDs are still the main source of revenues for labels? It’s not quite as rosy a picture, as figures published this morning by German industry body BVMI show.

Revenues in Germany from CDs, downloads, vinyl and streaming fell by 0.4% in 2018 to €1.58bn. The message from BVMI is that this isn’t necessarily bad news, though, as the German market reorients itself around streaming.

“After its previous four years of growth, industry turnover has now had its second year at a steady plateau level. This is not unhappy news,” said chairman and CEO Dr Florian Drücke.

“In fact, the German music industry continues to hold the course as it moves through a major transformation phase. This stability is remarkable considering that we experienced a 20 percent decline in sales of CDs, a media format that still contributes significantly to industry earnings and is therefore tremendously important for the industry’s overall balance sheet.” 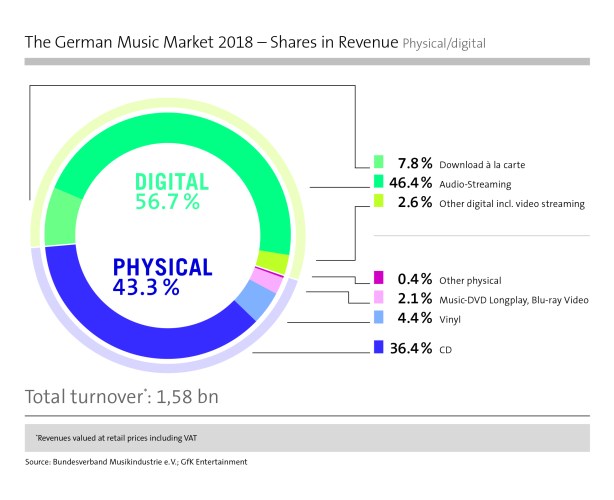 The trends in Germany include a 33.5% rise in revenues from audio-streaming, which now accounts for 46.4% of all recorded-music sales there – with a tipping point surely coming in 2019 where it moves past 50%.

CD sales remain a significant chunk of the German market, accounting for 36.4% of sales – and it’s their decline (along with download sales, although they’re a much smaller 7.8% chunk) that led to the overall shrinkage in 2018. CD sales were down by 19.9% in 2018 in Germany, while downloads fell by 21.9%.

The hope in Germany, however, is that as streaming takes an ever-larger share, the market is just a little bit later to the kind of sustained growth that the US and UK have been enjoying. Japan, another highly-physical market, is in a similar situation.

“We owe the stable market to the ongoing substantial growth in audio streaming, which experienced a 33.5-percent increase from an already very high level, thereby demonstrating its widespread acceptance among fans,” said Drücke. “This is a very good sign for the coming years, as it indicates users’ increasing willingness to pay. The lion’s share of audio streaming revenue is indeed generated by premium subscriptions.”

It wouldn’t be an industry-body figures release without a jab at YouTube, of course. Drücke also pointed out that music streams on on-demand video services only accounted for 2.4% of recorded-music revenues in Germany last year. As the proposed European Copyright Directive – Article 13 included – reaches its final legislative stages, Drücke was keen to keep up the encouragement for politicians to approve it.

“A message to all of those who still think that user upload platforms should not be required to pay higher licensing fees: Recent studies show that fans spend about as much time listening to on-demand music from audio streaming as from video streaming services,” he said. “And yet, this behaviour is in no way reflected by actual sales figures… This reality is often forgotten in the current debate on copyright reform.” 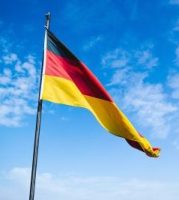 Music industry body the IFPI was due to publish its annual Global Music Report in March, with data on worldwide recorded music revenues in 2019. The launch was postponed due to the Covid-19 pandemic, but the report has now...
Read More