Spotify wants its editorial and artist and label-relations teams to work “more in alignment” in the future, at least in the Nordic territories: Sweden, Norway, Denmark, Finland and Iceland.

That’s according to Johan Seidefors, head of content, Nordic, at Spotify. He was talking in the streaming service’s session at the by:Larm conference in Oslo last week. Seidefors showed a slide representing the two teams.

“On the left, the music, culture and editorial team, and then [on the right] the artist and label marketing team. Each of these functions have their own mission,” he said. “That’s pretty important, to keep them separated. But moving forward, we feel it’s more important for them to work more cross-functional and more in alignment for the artists.”

Music Ally can’t help wondering whether this is partly a response to the kind of criticism voiced by marketing agency Motive Unknown’s founder Darren Hemmings last month at the FastForward conference in Amsterdam. He was talking about pitching to Spotify playlists.

“It’s become this comedic dance that doesn’t really mean a lot. There’s a person whose job it is to go to somewhere like Spotify and say ‘We’ve got this new priority and we’d love you to playlist it’. And there’s someone’s job at Spotify in artist or label relations to sit and go ‘That’s amazing, I love that track’,” said Hemmings. “And then at the end of the meeting you ask if you can get playlisted, and they say ‘No! Because we don’t run the playlist, the editorial people do.”

Seidefors’ comments at Spotify’s by:Larm session, even if not a direct response to this particular criticism, suggest Spotify is aware of the potential for unrest around this process – while also maintaining its official line that playlist curators are editorially independent. “Editors will always keep the user first,” as he put it.

He also talked about the incoming overload of tracks for those editors. “We’re being pitched about 30,000 songs a week, which says something about the pressure we put on our editors to get music up on their playlists!” said Seidefors, who also provided a positive message about how Spotify is going about its business in the Nordic region.

“The music team don’t have to be as reactive. We’re moving past the ‘relationship and service’ phase and into a more proactive mode where we can serve artists, and educate and inspire artists and labels, and help them navigate the Spotify universe,” he said. “We strive to be your trusted partner.” 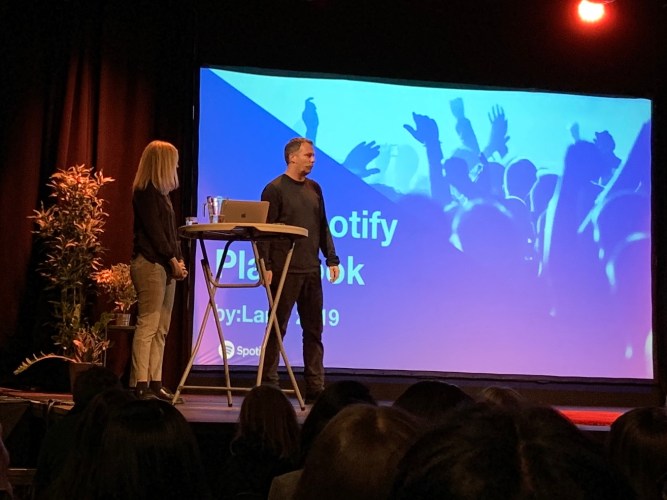 The by:Larm session also saw Seidefors and his colleague, artist and label marketing lead Erika McRoy, talk about other ways Spotify is working with artists in the Nordic region. That includes the Spotify Singles initiative, with artists visiting the company’s Stockholm studio to record their own songs and covers for double-track releases.

Spotify brought its Singles to the Nordics in June 2018, and has so far released 12 of them from artists in Norway, Sweden and Denmark, with the first Finnish participant joining soon. The 12 singles have so far generated more than 50m streams, including Hov1’s ‘Still’, which topped the Swedish charts.

McRoy also ran through some of the tools that Spotify is keen for artists in the Nordics (and, indeed, elsewhere in the world) to use on its platform.

“Just the other week we launched new headers for artist profiles, which are just on iOS right now. They’re much cleaner, with the follow button up in the right corner,” she said.

McRoy encouraged artists to start using Spotify’s ‘Canvas’ format as soon as they’re able to – it’s currently still in beta-invitation phase – with its eight-second looping videos that are shown on the ‘Now Playing’ screen while a track is being listened to.

“It’s a really great way to express yourself: to use those eight seconds to show a little bit more of yourself or give some context to that song,” she said. “Right now it’s only live in beta, and not available for everyone. However, when it will be, it will be on Spotify for Artists.”

McRoy also described Spotify’s playlist-pitching tool for artists as “one of the most revolutionary tools we ever had: Spotify has never been this democratic”.

Seidefors also talked up podcasts as a marketing tool for artists on Spotify, tying in to the company’s wider push on spoken-word formats.

“Looking at it as a tool for artist-storytelling, it’s definitely something you can use,” he said, noting that artists can treat their own podcasts just like a single or album release, including pinning them as the ‘artist pick’ on their profiles.

“Soon we’ll have a way to get your podcast data in a similar way as you do for Spotify for Artists. You may understand that you have a different audience listening to your podcast than you do for your music.”

(Spotify did launch Spotify for Podcasters with analytics in beta last October. It wasn’t clear if Seidefors was referring to that tool coming out of beta “soon”, or whether he meant a different tool that will enable artists to compare their music and podcast audiences. We’re on the case to find out. Update: Spotify has confirmed that he was referring to the existing tool coming out of beta.)

Seidefors also stressed Spotify’s willingness to create original content for and with artists, citing the example of Billie Eilish, who recently visited Spotify’s Stockholm office, and was filmed talking about her working process and experience as an artist.

“Videos like this can be used in a variety of ways. We can put it on the service or put it in socials, and she can use it in her socials. We can really build a bond, and build it together.”

Eilish is in demand: YouTube recently made her the first artist to get its new ‘short-form mini-series’ treatment, with a series of videos exploring, well, her working process and experience as an artist.

Meanwhile, McRoy opened the session by talking about Spotify’s Equalizer Project, and research conducted by the company that revealed just 11.3% of the songwriters behind its 50 most-streamed tracks in Norway last year were women – and a mere 1.2% of the producers.

“This is not really telling the truth, we think. When you look at the artists and the music coming out of here, you can see all these amazing female artists and producers,” said McRoy. “We just hope that we can inspire both this generation and the next.”

Music Ally is long enough in the tooth to remember the days when big music stars really could cause traffic spikes that might crash big digital services. That's rarely the case nowadays, which is why we were extremely...
Read More

Spotify's algorithm tried to make us stream R3HAB and we said... yes, yes, yes! The streaming service is celebrating the fifth birthday of its algo-personalised 'Discover Weekly' playlist by revealing that Moroccan-Dutch...
© Copyright Music Ally All rights reserved 2020 - Website designed and maintained by